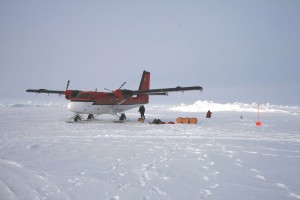 On the ice (credits: ESA)

The CryoSat Arctic campaign is taking place during April and May 2011 to validate data from ESA’s CryoSat ice mission.

The aim is to gather a wealth of in-situ data using a range of instruments on the ground and radar installed on aircraft. These measurements taken on and over land and sea ice, and can then be compared with the data being received from CryoSat in orbit.

The one-month venture is an enormous logistical undertaking, involving teams of scientists in central Greenland, Svalbard and the Fram Strait, Devon Island and Alert in northern Canada. 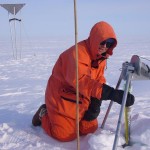 Measurements on the ice (credits: NPI)

While direct measurements of land and sea ice are taken on the ground, planes will be flying above taking measurements, and at times coincide with CryoSat’s orbital path. This is one of the most important validation campaigns for CryoSat, as for the first time, simultaneous measurements of ice from space, from the air and on the ground are being made.

The aim of all CryoSat validation activities is to assess and quantify uncertainty in the satellite measurements of sea-ice thickness and land-ice thickness change; thus, the need for dedicated, independent, ground-based and airborne campaigns.

During this campaign two dedicated aircraft will be used to acquire measurements of ice. 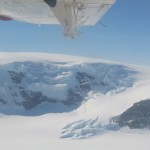 The Twin Otter from DTU is suitable for a short take-off and landing sites and has a maximum range of 1500 km, which is about six hours in the air, with airspeeds up to 250 km/h. It carries ASIRAS – ESA’s Airborne Synthetic Aperture and Interferometric Radar Altimeter System, which simulates CryoSat measurements, a laser scanner and a radar altimeter.

The Basler BT-67 (DC-3) aircraft, ‘Polar 5’ (C-GAWI) from AWI has a maximum cruising speed of 390 km/h and maximum range is 3,500 km. It carries an electromagnetic system for sounding ice thickness and a laser scanner.

Notably, NASA and ESA are collaborating in this huge international effort. As part of their Icebridge airborne campaign to survey polar ice cover, NASA is taking part in joint flights with ESA planes, overflights of European ground sites and underflights of CryoSat.