From Angelika (NPI), Arctic Ocean north of Svalbard, 2 May

The Norwegian Polar Institute’s second cruise this spring through the sea ice north of Svalbard is well underway. After a bit of searching to find some decent ice pack to set up camp, we’ve had a successful few days sampling the snow and ice – along with a nightly visit from some polar bears checking out our experiment site. 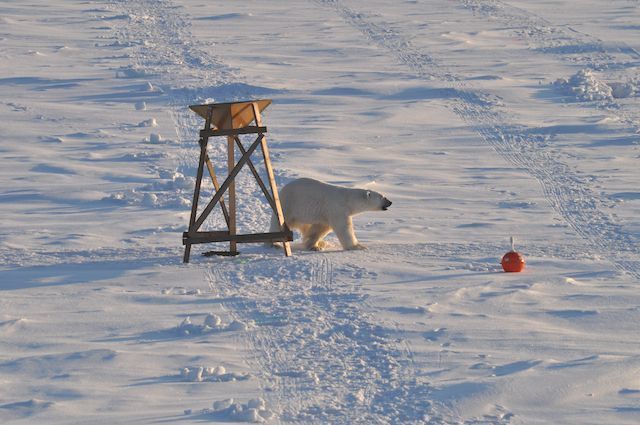 We’ve been aboard the RV Lance with two scientists from the Finnish Meteorological Institute who joined our NPI sea-ice physics group. Physical oceanographers, marine biologists looking at pelagic, benthic and ice-associated organisms, bio-geochemists, and a dive team are also on the icebreaker, making this a very mixed and interdisciplinary crowd!

We left from Longyearbyen on the 26 April and headed back to the ice we had been 10 days earlier. However, we were greeted by brash and broken floes. The bad weather we experienced at the end of the last cruise had broken up the continuous cover of first-year ice, leaving us with rather small floes that were not very suitable for CryoSat calibration and validation work.

So, after a rather short stop, Lance worked her way further into the ice pack in the search of larger floes. A few miles on, the pack was more consolidated with smaller leads between the floes. We managed to set up a two-day station for intensive sampling and surveying of the snow and sea ice cover.

RV Lance next to the ice station shortly before leaving. The ice broke up just after the last person left the ice (credits: A. Renner)

As part of the CryoVEx campaign, snow thickness, elevation, and ice thickness (by drilling and with ground electromagnetics) were measured on the first day along several parallel transects 140 m long. We complemented these measurements by sampling in snow pits and taking cores.

While the weather was not ideal, we got a short window for an EM-Bird flight. Our pilot got his first opportunity to get used to the load of the bird and the measurement procedures though 300 ft for calibrations were sometimes rather close to the clouds. Nevertheless, we managed to cover about 35 km and the EM-bird, called Liv, cooperated nicely after we had replaced a faulty power supply unit at the start of the cruise. 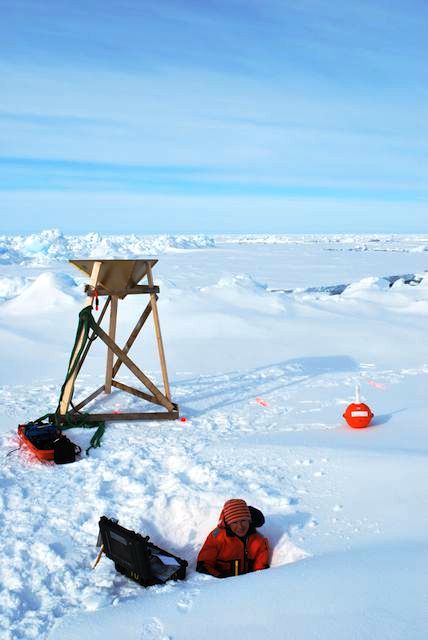 On the second day, after a nightly visit by some polar bears, the weather was perfect for flying. So off we went again for a long flight north. Unfortunately, Liv got a bit grumpy and after about 40 km in the air decided not to work anymore. Back to the ship to troubleshoot…

Meanwhile, the Danish Twin Otter crew did their Austfonna flight and were ready to get into position and fly a transect over the corner reflectors we had set up near Lance.

In the afternoon, the sea ice folks on board were found looking patiently out the windows waiting to spot the small red Twin Otter plane and were very happy to see it when it finally arrived. A few loops by the plane over the transect seemed to inspire our Liv as well, and in the evening we managed another EM-Bird flight. We did some regional surveying as well as a nice overflight of the transect and several additional parallel lines.

All in all, it has been a very successful couple of days.