The whole team was more than pleased – relieved and happy might be the right description – to see Henriette and her team from the Danish Technical University arrive from Greenland today.

Today’s arrival of the Nordlandair Twin Otter plane in Alert marks a new and crucial phase of the CryoSat campaign. The plane carries precious cargo: the ASIRAS radar instrument which – much as the CryoSat satellite does much higher up in its orbit about Earth – emits a series of radar pulses as the plane travels over the ice and snow  surfaces and very carefully records the faint return echo from the surface.

While ASIRAS has many similarities with the SIRAL instrument aboard CryoSat, it makes measurements with much higher resolution than the satellite. It is, thus, an essential tool for understanding the interaction between the CryoSat radar echoes and ice and snow. 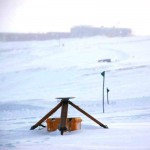 GPS base station several kms from the Alert base (credits: M. Davidson)

The arrival also means that the full suite of ‘ESA’ planes, three in total, are all in place and raring to go. The photo shows the planes: the orange, white and blue plane on the left is the AWI Polar-5, the red plane with white dots in the middle is the Twin Otter carrying ASIRAS and the right-most plane is the Ken Borek Twin Otter, which is used to ferry the ground team on and off the sea ice.

The next days will be crucial as the planes are deployed across the frozen vastness of the Arctic Ocean.  The first flights early tomorrow will be to identify and mark ground sites where the Canadian and British ground teams will carry out detailed studies of snow and ice properties.

They will soon be followed by an armada of planes bristling with sensing instruments including ASIRAS, airborne laser scanners, visible and infrared cameras, electromagnetic ice-thickness sensors, snow radars of different guises and the list goes on.

A highlight on 15 April will be the joint flights with the NASA P-3, which will join the rest of the airborne fleet by travelling all the way up from Kangerlussuaq, 1500 km south of Alert in Greenland. At the same time, CryoSat will also be ‘visiting’, travelling at 7 km per second and crossing over near Alert.

The team is of course hoping that the weather will play along. Luckily the signs are that tomorrow, 14 April, and the following day it will be sunny with the clear skies. This is that are essential – both to collect data, and even more importantly for the safety of all participants.

Meanwhile, preparations continue. The photo on the right shows Katharine and Rosie putting together wooden support frame that will be used in the coming days to hold up the corner reflector to be positioned on ice floes in the Arctic Ocean.

The photo on the left shows Christian Haas from the University of Alberta getting first-hand instructions on how to use the chain saw that will be used in the coming days to cut up blocks of snow off-shore on the wind-swept sea ice.

Given the daunting tasks ahead, the tension is rising but everyone is looking forward to these intense days ahead and the unique opportunity to bring the CryoSat mission a big step forward.