Not your typical Saturday afternoon

From Seymour (UCL) at Resolute Bay, northern Canada on 9 April

After yesterday’s rather gentle foray onto the ice in nice weather to lay out our two practice ground targets we returned to find out exactly where we had been thanks to our GPS readings. Google maps confirmed that we had indeed been ‘walking on water’ when walking between the two sites.

Before embarking on our second day trip out, and after some lengthy discussion, we decided that it would be useful to be able to see one site from the other, not so easy given the terrain and various bits of trapped bergs in the way. Justin had a 3m pole we could use, but what to put at the top that could be seen from 1km away? Just after breakfast, Justin emerged with what else, but a Canadian flag for our target.

It was time to hop back on our snowmobiles to head to the other site to see if we could see the flag. 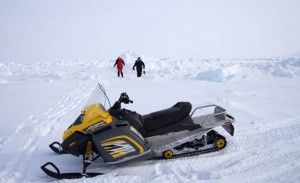 On reaching camp orange the big question was whether the flag at the other site would be visible. I was still digging some binoculars out of my bag when the others announced triumphantly that, in fact, it was visible with the naked eye.

Next comes the business lining everything up.  Sitting near our nice orange marker, I first line up Rosemary and then it’s her turn to line up Katharine, ably assisted by Justin.

After another long discussion (the whole point of this preparatory exercise), the perpendicular to the line between the two sites is made, taking care not to trample on our precious survey area.

After a short lunch break, during which the juice froze solid in the straw I was using, the grid was complete and ready do conduct the snow survey.

So after a long tiring day, we head back and one of our team spots something moving amongst the rough ice. Not yellow like a polar bear but more dark and shifting, perhaps an Arctic wolf out on the first sortie of the night looking for some prey.

Hard to discern, but in possession of a long lens (mine) they catch a few snaps as their skidoo races home. Anxious to see what sort of elusive creature they have photographed the pictures are downloaded as soon they return and when zoomed, revealed what is, in fact, quite a common site in these parts … an oil barrel!!