Posted on April 29, 2012 by Samantha Cristoforetti

No molecule shall stand still!

As part of my training on the systems of the International Space Station (ISS) I have passed my ECLSS exam a couple of weeks ago at Johnson Space Center in Houston. ECLSS is the Environmental Control and Life Support System and is one of the ISS systems that the crew interacts most with. What nature does for us when we are on the planet, we have to engineer for ourselves when we are in space. Things like water or waste management are very much on our minds on Earth as well, as we realize that we might be pushing the limits of nature’s ability to support our needs. But how about something so simple as air circulation? 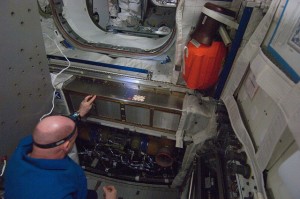 If you live in a part of the world that gets warm sometimes, you might have used fans in your home to circulate air and make the heat more bearable. If your part of the world gets very warm quite often, you might even have an air conditioning system in your home for comfort. But have you ever thought of a situation in which your health, your safety and even your life may depend on a constantly functioning ventilation system?

That is the case on the International Space Station. One of the consequences of gravity that we take for granted on our planet is natural convection : we all know that warmer air rises and cooler air descends, right? That’s one of the main drivers of our weather phenomena, and it’s also the reason why the heat from radiators is well distributed in our homes.

This buoyancy-driven effect does not exist in microgravity, therefore on the ISS we resort to forced convection.  A carefully laid out system of ducting, fans and grids creates a known airflow pattern that satisfies the needs of astronaut health and comfort, as well as the requirements of a number of subsystems.

For one thing, we need forced air circulation to have proper mixing of atmosphere components. Imagine what would happen if that was not the case: as crewmembers breath, they exhale CO2-enriched air, and without ventilation the concentration of CO2in the air around their head would increase to dangerous levels.  A little bit like breathing in a bag!  Also, we constantly introduce oxygen into the ISS atmosphere to compensate for crew consumption. The Oxygen Generation System (OGS) has one outlet into the cabin and we rely on inter-module ventilation to distribute oxygen it throughout the Station. Without ventilation system not only newly produced oxygen would not reach all the modules, but the pocket of concentrated oxygen formed at the OGS outlet would cause a fire hazard. 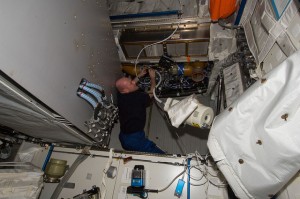 Besides maintaining a homogenous atmospheric composition, the ventilation system also makes sure that all the air is circulated through a number of subsystems. Remember, for example, that we don’t grow plants on ISS, so we need dedicated  components, called Carbon Dioxide Removal Assemblies, to scrub CO2 from the Station atmosphere. And of course we want the air to flow through our air conditioning system, which not only provides cooling, but also removes the humidity produced by crewmembers’ breathing and perspiration. By the way, the condensate recovered from the atmosphere is not lost, we have a way to process it into potable water. But that’s worth a story of its own…

I’d also like to mention a safety-related aspect which might not be so obvious. The automatic fire detection capability on ISS is dependent on running ventilation: for it to work, we need to circulate air through the smoke detectors, which are typically placed in air ducts and in front of inlet grids. Should the ventilation on ISS stop, you might notice on NASA TV that crewmembers will periodically check each module for burning odour. As we are taught during training, without ventilation the crew is prime for fire detection!

Last but not least ventilation contributes to the cooling of some components. This is especially true in the Russian segment, so much so that there are strict limitations on the opening of wall panels, since this inevitably causes some disruption of air circulation patterns. 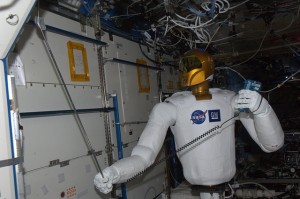 Robonaut measures airflow for the first time on the ISS (credit: NASA/ESA)

By now I’m sure you’ll agree that maintaining a nominal air flow on Station is of paramount importance. That is why crew are responsible for making sure that inlets and outlets are kept free of obstructions at all time. Moreover, cleaning of the grids and the filters is part of the regular weekend housekeeping activities.

Crewmembers are also periodically asked to perform a measurement of the velocity field in front of outlet grids, so that experts on the ground can infer information about the health of the ventilation system. I’ll admit, it’s a bit of a tedious task, but also one that requires precision and a steady hand. That’s probably why it was the very first actual task that Robonaut 2 had a chance to try on-board a few weeks back. Who knows, by the time I get to ISS myself,  R2 might have taken over this duty completely. Way to go, R2!