Posted on July 22, 2013 by Samantha Cristoforetti

How about a ride in the world’s biggest centrifuge? 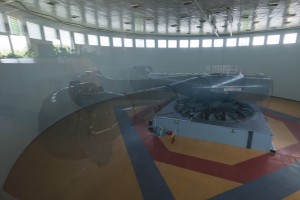 Star City’s 18-m arm centrifuge is the biggest in the world! As part of the training we only go to 8G on the ballistic profile, but this beast can do much more. (Credit: GCTC)

“The capsule is rotating to the starting position” announces the voice from the loudspeaker a few minutes after the hatch behind me has been closed. I’m comfortable in the big seat, lying with my back parallel to the floor, just as I will be before the launch, on top of the Soyuz rocket. I know I’m being watched carefully by the medical personnel. Not only can they see me in the camera view: via the medical belt on my chest they can monitor my pulse and my breathing rate, while the cuff on my arm will periodically inflate to take a blood pressure measurement. I also wear a sensor on my finger and one on my ear.

It’s roomy here in the centrifuge capsule, no comparison with the tiny Soyuz descent module. When I’ll be in here to do my manual re-entry exam, the control panel will be installed above me. But not today. I’m just here for a familiarisation run with the G-profile of a nominal ascent and re-entry. 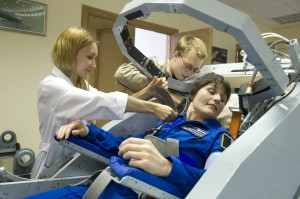 Letting the pros strap me in. They know where all those medical telemetry cables have to be routed. (Credit: GCTC)

I’m not unfamiliar with G loads. As a military pilot I’ve been exposed many times to a high-G environment. In air-to-air combat or in escape manoeuvres, pilots pull back on the stick to put the airplane in a steep curve or to pull it out of a dive. That pulling back on the stick is the reason of the expression “pulling Gs” that you might have heard. When you pull 2G, for example, you are pushed down in your seat with twice your weight. At 6G, your 5-kg head actually weighs 30 kg on your neck – that’s not counting the helmet.

One final instruction: I need to keep the button pressed through the run. (Credit: GCTC)

Straining your neck, while a very concrete possibility, is not the main concern in high-G situations. The greatest danger is caused by blood being pulled away from your head into your lower body, which can starve your brain of the oxygen it needs and cause symptoms that range from tunnel vision to loss of consciousness. To mitigate this problem military, as well as acrobatic pilots, are trained to squeeze the muscles in their legs, buttocks and abdomen and to use a special breathing technique that helps maintain blood pressure in the head.

Let’s be clear: I will not need any of this in today’s centrifuge run. The G loading in the Soyuz is not directed head-to-feet, like in a jet, but rather chest-to-back. No blood rushing away from my brain, no tunnel vision, no passing out. What I do expect is pressure on my chest, of course. Possibly some discomfort and some difficulty breathing. 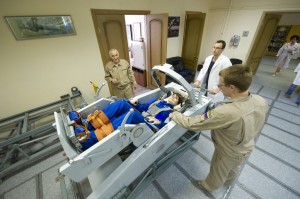 I’m strapped in, the seat is tilted back. Time to get into the centrifuge! (Credit: GCTC)

So, here we are, the centrifuge begins to speed up and I start to feel the build-up of pressure on my body, as the doctor’s voice announces via the speakers that we are passing 2G. At 3G I can definitely feel significant pressure on the chest but I can still breathe quite normally. Nevertheless, the doctor encourages me to transition to the breathing technique he has shown me just before the run: contract the chest muscles to rigidize the rib cage and breathe with my belly. Not having had the chance to practice this a lot before being strapped in the centrifuge, I’m sure thankful for all those belly-breathing exercises in yoga classes! Still, I don’t feel I have a great command of this technique. Try to contract strongly your chest muscles while leaving your belly completely relaxed. How does it work for you? 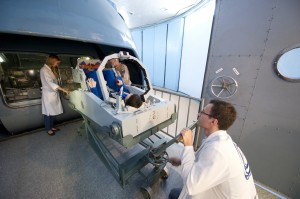 As we move past 3.5G inflating the lungs becomes difficult and I give my best try at the breathing technique. Indeed, even in my poor execution it seems to help. I must have slowed down my breathing rate, though, because the doctor reminds me to continue inhaling and exhaling at a normal pace. I’m also starting to feel some pain: more a nuisance than a concern, but definitely present.

After about two minutes, as we pass 4G, I hear the doctor warning me of the impending simulated cut-off of the first stage engines. Just like in the real flight the G load is suddenly released. It’s a bit disorienting for a few seconds as those Coriolis forces play tricks on my equilibrium organs and I have the feeling that the capsule is tumbling forward. Fortunately my brain recovers its bearings quickly and I’m ready for the next G build-up. This time we go only to 2.5G before simulating cutoff of the second stage, and then again slowly up to about 3.1G, when the final G release marks the end of the 9-minute ascent phase. Next time I’ll go through such a G profile, at this point I’ll be in orbit!

I’m all smiles… for the moment. Medical personnel monitors the run from a dedicated console. (Credit: GCTC)

The day is not quite finished yet, though. After a few minutes of rest, it’s time to spin again to simulate the G build-up during a nominal re-entry phase. The peak G-load is again around 4.3 G and in real life it occurs as the capsule is slowed down by the thicker layers of atmosphere. I know exactly what to expect now and indeed there are no surprises compared to the first run.
After I come to a final stop, the centrifuge technicians are quick to open the hatch and pull the seat out. I’m done for the day, but I’ll be back very soon for the ballistic re-entry profile. That will definitely be a more challenging experience, with a peak load of 8G. Really curious to see how that feels!