Patches, Watches, and Sunglasses, episode I: the patch

Patches, like watches and sunglasses, are a pilot’s thing. Worn on flight suits, leather jackets, or T-shirts, pinned on corridor walls or printed out on coffee mugs for the briefing room or the squadron mess, they are part of the decorum at every group of flyer’s hideout. They usually convey messages for the happy few who know how to read them, and if sometimes the message is encoded with an esoteric subtlety, sometimes… well, not that much (like that patch of a squadron whose name or country of origin I won’t mention, proudly sporting the motto “pulling G’s” above a stylized bulldog actively pulling on…a poor lady’s G-string clenched between his teeth.  Speak about military finesse…). 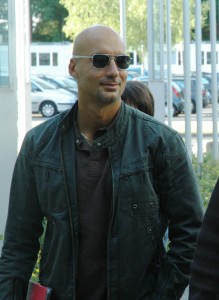 Luca on our first day at EAC

Tom Cruise on his first day at Top Gun

Yes, the hair (or lack of) is one of them, but the main one is: Luca is not (yet) wearing his class patch…

The astronaut corps is, for good or bad, no different than any other group of fliers anywhere else in the world. Therefore, we quickly realized, one month into Basic Training, that we had to have our class patch, to establish us as a team. And like every patch in the world, following an immemorial and yet never uttered tradition, it was designed… around a beer, in a bar (well, a bar/restaurant, to be honest). The brainstorming was intense, as you can imagine, and (one of) its result(s) was the general design: a helmet in the center, symbolizing the astronauts’ job that was now ours, framed by our individual flags and ESA’s to unite them, the helmet’s golden visor reflecting a “09” referring to a launch countdown as well as evoking the year of our recruitment. We celebrated this great achievement, one of the first steps towards defining the identity of this special group of people. 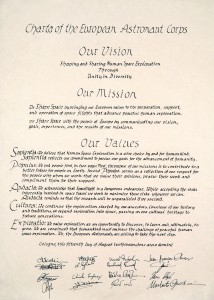 Charta of the European astronaut corps

Later on, we added in the design 6 white stars representing the six individuals, and we included an extra layer around the design, to encapsulate the motto of the European Astronaut Corps: Sapientia, Populus, Audacia, Cultura, Exploratio. Thereby, we were linking our class to the groups of preceding European astronauts in an affiliation that we are all very proud of.

As the result was now quite solemn, we added our class name, the Shenanigans, as a center element. I won’t elaborate here on how astronauts classes pick (or deserve) their names, same for individuals’ call signs, but let me tell you it is somehow related to the sense of humor and practical jokes that  we, still now, enjoy together.

With the design approved, we started the next step: production… to quickly realize that no one of us could boast of artistic talent, or even drawing, as a skill on his/her resume. So after a couple of ugly short-lived draft attempts, we decided to turn to talented individuals, and luckily there were some in our entourage. The guys from spacepatches.nl, having dealt with patches for a long time, kindly offered their help and came up with the layout of the flags, that reminds of the ISS cupola. And my good buddy V. Gibaud was finally responsible for integrating all those ideas in an artistic way, for drawing the central helmet part, and for producing the patch. Let me tell you it was no easy task, given the expectations of high-maintenance hard-to-please over-achievers like the astronauts sometimes are. There is no word to describe his talent, and the final result was a total score in every possible way. 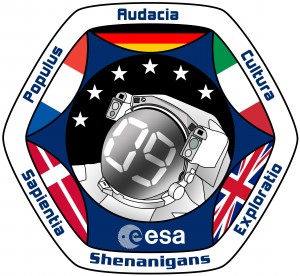 We now proudly sport it on our training flight-suits and jackets, we pin it on corridor walls, and we even printed it out on our coffee mugs… without mentioning iPhone wallpapers! We sometimes distribute it as a token of appreciation from our group after training or at public events. It has flown in planes, sky-dived, bungee-jumped from 233m high, gone underwater for spacesuit training and on top of the Mont Blanc so far, and I have no doubt it will fly to space and back quite a number of times in the years to come. Godspeed, Shenanigans’ patch!