Posted on June 20, 2013 by Samantha Cristoforetti

I will fly back to Star City next Sunday to undergo water survival training with my crew. I thought it’d be a good time to post the second part of my “Star City Impressions”. See here for Part 1.

[cont.] Before leaving for Kazakhstan, Scott and his crew would pass their final exams in Star City: two full-day simulations in the Russian segment of the ISS and in the Soyuz respectively. 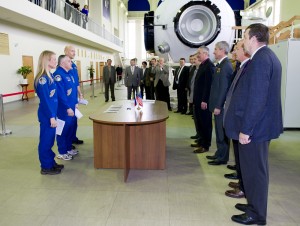 Exp 36 crew, including fellow Shenanigan Luca, stepping in front of the commission for their final exams. (Credit: GCTC)

I was particularly interested in this latter and my own training schedule did allow me to go and watch in short stints throughout the day. The beginning of an examination day is stiffly formal: the crew, dressed in their blue overalls, report to the trimly dressed examining commission in the spacious hall that houses several Soyuz simulators, each one of them a lonely island composed of a descent module and an orbital module stacked on top of each other. A few carpeted steps give access to a “door” though which one can crawl into the descent module seats: no such opening exists in the real spaceship, of course, but lowering oneself from the orbital module hatch would be cumbersome in Earth-condition daily training. The brains of the simulator are housed in nearby computer racks: they are a perfect replica of the computers that fly on the actual Soyuz, so that the simulator reacts exactly like the real spaceship. From the control room instructors can observe the crew on camera and view exactly what crewmembers see both on the control panel displays as well as the Commander’s periscope view. Needless to say, they can also monitor every command input from the crew and inject all kinds of malfunctions, from a leak in the capsule to a faulty sensor or a stuck valve. And of course, all possible computer and engine failures, that are inevitably bound to occur on every training day. 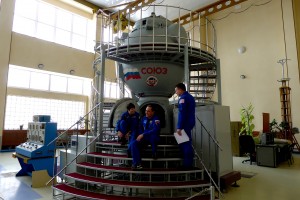 On the morning of the exam, according to a well-established protocol, the crew is invited to choose one of several sealed envelopes, each one containing a different combination of malfunctions and failures that will constitute the exam scenario. Of course, the crew doesn’t get to read the “ticket”. They’re instead dismissed and head to the changing room to wear their Sokol pressure suits. In the meantime, the commission members find their seats in the control room, from which they will follow the exam on displays and camera views. In some contrast to a certain rigid formality that seems to be an unavoidable necessity on these occasions, crew final exams also seem to acquire at times the character of a social happening. Typically a sizeable crowd of people associated in diverse capacities with the Training Center will gather in the simulator control room and follow every action with the participation of football fans at the stadium: yes, he remembered to open the oxygen valve at the right moment! bravo, she promptly noticed that tricky failure in the infrared sensor! oh, no, they shouldn’t have shut down the engine that quickly! And so on… After a debrief, in which crewmembers are entitled, and even encouraged, to justify their actions and fight for a better grade, the day ends in merry celebrations at a dinner party thrown by the prime crew, finally fully certified for their spaceflight. 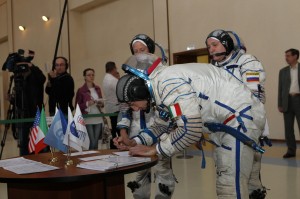 Luca signing in for his Soyuz exam (Credit: NASA)

Final exams are but one of many events that mark the passing of the seasons in Star City and constitute an occasion for the community to spend some cheerful hours in merry company in front of a lavishly decked table. The well-prepared Star City dweller always has a toast ready, be it to mark a crew’s successful arrival to the Space Station or their safe return to Earth: ranging from witty anecdotes to sagacious philosophical dissertations, Russian toasts are well-articulated homages to bravery, dedication, friendship, love, family and any other human value and virtue that might inspire an 80-year old Soyuz instructor or a 12-year old cosmonaut daughter. The gathered company listens in patient silence in a crescendo of withheld enthusiasm which bursts out, after the traditional exhortation “три, четыире” (three, four) in a thunderous “Hurrà, hurrà, hurrà!” 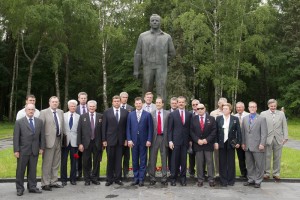 So here I am, almost three years after that first toasting marathon, in the middle of a pretty intense five-week training session, in which I’ve started flying Soyuz simulator scenarios with my commander, Anton Shkaplerov, and I have begun learning how to manually fly the Soyuz in the docking and reentry phases. Star City continues to breath with the rhythm of departing and returning crews: today the community is welcoming back Kevin Ford, Oleg Novitsky and Evgeny Tarelkin in a ceremony featuring the local school band leading the traditional parade from Gagarin’s monument. I have to miss the fun, though: I’m scheduled for my first underwater training run in the Russian spacewalking suit, the Orlan, together with my fellow Shenanigan Alex. [continues…]