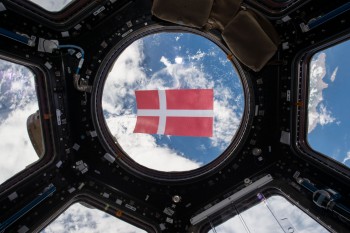 ESA astronaut Andreas Mogensen will be departing from the International Space Station later today and his iriss mission is over in terms of experiments and demonstrations. iriss mission director summarises the mission as “more than positive”.

Since the last recap for flight day 8, Andreas has completed the Thor images with great success and sent them to Earth for analysis. The researchers on ground are calling it “a real success”.

The three-day Mares setup, commissioning and packing is also complete. Andreas and cosmonaut Sergei Volkov worked as a great team to give the muscle-measurement machine a first run-through with an astronaut in the chair, even finishing ahead of schedule. Iriss flight director remarked “Andy is great at mechanical operations, for example he cleared up Mares in two thirds of the time we expected.”

The last Demes tasting session was completed yesterday and all Andreas’s reports have been sent to Earth. The Bistro experiment has been packed in the Soyuz for return to Earth.

Today Andreas finished his last task for iriss science, mobiPV. The network worked and communications was good allowing ground control at ESA’s astronaut centre to listen and look over his shoulder.

Andreas recorded three videos for educational purposes on his last night and these have already been edited and online.

Japanese astronaut Kimiya Yui completed the Endothelial Cells experiment by putting the samples in pouches and packing it in the Soyuz for its return to Earth, making sure they will be among the first things to process at the landing site.

At 18:13 GMT Andreas, Gennady Padalka and Aidyn Aimbetov will wave goodbye, close the hatch to their Soyuz spacecraft and fall back to Earth.

Despite the iriss mission having two days less on the Space Station, Andreas and the teams on Earth managed to squeeze in all the experiments that were originally planned with only a few having to work with less time than scheduled before his launch.

15 experiments and demonstrations were finished with a green check mark on the Mission Management Team science overview paper.