Flight day 8, Wednesday, was spent mostly working on Mares with help from Sergei Volkov. The large machine was installed and setup ready for use the next day on flight day 9. Andreas will be the first astronaut to take measurements with Mares in space with an astronaut, himself, in the machine. This timelapse video of ESA astronaut Samantha Cristoforetti unpacking and testing Mares gives a good impression of the complexity and size of the machine:

Japanese astronaut Kimiya Yui has diligently been monitoring the Endothelial Cells experiment in ESA’s Kubik incubator-centrifuge since Andreas arrived on the Station – as iriss science team lead put it in the Mission Management Meeting: “like a swiss clock”. Inside are samples of human blood-vessel cells that were being kept at 37°C with some samples spinning to recreate Earth-gravity. On flight day 8 Kimiya commanded Kubik to stop spinning and lower the temperature to 6°C for storage and return to Earth.

Andreas completed the penultimate taste-test of Demes, one of the first systematic scientific studies on whether taste is influenced by the weightless environment. 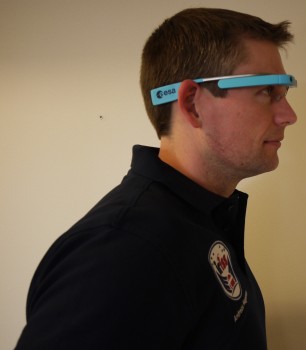 In the afternoon Andreas unpacked the MobiPV setup consisting of head-mounted cameras and smartphones. MobiPV will look at the effectiveness of allowing more live interaction with ground control and the procedures to follow during operations. During unpacking, a USB cable to charge the equipment could not be found immediately, but ground control told Andreas to check with Sergei. Sergei quickly found the cable that had been put it in a different place than expected when he removed the bags from the Soyuz spacecraft. The MobiPV equipment is now charging and ready for the experiment.

The Space Headaches experiment is going well as Andreas has completed the questionnaire for every day he has spent in space, including today.