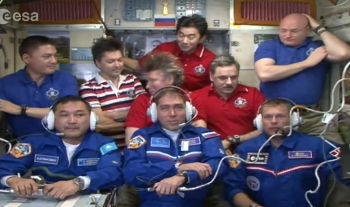 Their flight to the International Space Station in the Soyuz TMA-18M spacecraft began at 04:37 GMT (06:37 CEST, 10:37 local time) on 2 September as they were launched into orbit from the Baikonur Cosmodrome in Kazakhstan.

After circling the globe for the following two days, the spacecraft docked at 07:39 GMT (09:39 CEST) this morning, 4 September.

The automated rendezvous sequence began about two hours before docking, with the crew ready to take over manually if required. The trio opened the spacecraft hatch  at 10:15 GMT (12:15 CEST) to join six astronauts already in space, bringing the total number of people on the Station to nine, for the first time since 2013.