Contributions for this blog will come from a number of the scientists out on the Arctic ice. These contributors include: 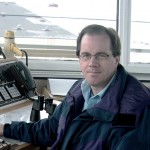 Malcolm Davidson – ESA’s CryoSat Validation Manager, is heading the campaign. His role is to organise these field experiments in the polar regions and ensuring that the results of the campaigns are fed back to ESA to include in the mission’s data-processing procedure.

Katharine Giles is a Postdoctoral Research Fellow at the Centre for Polar Observation & Modelling (CPOM), University College London (UCL). Her research focuses on using satellites to better understand the physics of ice-covered polar oceans. The original proposal for a satellite mission to measure ice-thickness change came from UCL.

Seymour Laxon is a Reader in Climate Physics at CPOM in the Department of Earth Sciences, UCL. Seymour is a member of the ESA RA-2 and the CryoSat-2 Science Advisory Groups. He pioneered the use of satellite radar altimetry to map the marine gravity field of the Arctic and Southern Ocean, and more recently he has generated the first direct measurement of sea- ice freeboard from space using data from the ERS altimeter systems. 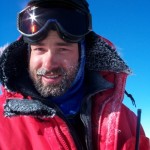 Michael Studinger from the Goddard Earth Science and Technology Center at the University of Maryland is the Project Scientist for NASA’s Operation IceBridge. Michael is writing reports from the NASA aircraft as it carries out the IceBridge campaign to monitor polar ice cover. NASA is taking part the CryoSat campaign through joint flights with ESA planes, overflights of European ground sites and underflights of CryoSat. 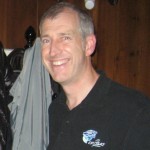 Mark Drinkwater heads ESA’s Mission Science Division at ESA-ESTEC in the Netherlands. Throughout the development of CryoSat, Mark was responsible for the mission scientist support to the CryoSat Project and preparatory campaign activities to verify that the satellite and data processing systems are compatible with achieving the mission’s objectives of deriving accurate measurements of ice-thickness change. 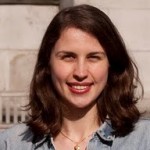 Rosie Willatt is a PhD student at CPOM at UCL. She works on determining sea-ice thickness using satellite radar altimetry. She is looking at radar penetration into snow cover on sea ice and analysis of data from experiments for calibration and validation of the CryoSat satellite. She is currently coordinating the UCL component of the CryoSat validation campaign. 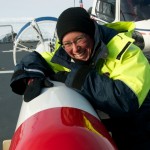 Angelika Renner is a postdoctoral researcher at the Norwegian Polar Institute (NPI). With a background in both sea-ice physics and physical oceanography, she continues to work in both disciplines at NPI’s ICE Centre Project, ICE-Fluxes. Focusing on sea-ice thickness north of Svalbard and in the Fram Strait, she responsible for running NPI’s EM-bird and is, thus, involved in the CryoSat validation campaign. 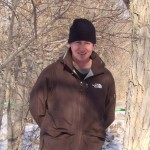 Robert Cullen is ESA’s Jason-CS Payload Manager. He has been involved with CryoSat from its humble beginnings with development of the mission performance simulator, development of its science processors, including those for ASIRAS and procurement of the SIRAL-2 hardware. He was also a key member of the Launch and Early Orbit Phase team, and finally managed the commissioning phase that ended in October 2010. In his spare time, he keenly follows the outcome of the CryoSat validation campaign and is helping analyse some of the CryoSat data.

Santiago de la Peña is a postdoctoral research fellow at the School of GeoSciences of the University of Edinburgh, UK. His research focuses on the interaction of radar signals with snow and ice with the aim of improving the retrieval of geophysical parameters from space and airborne radar altimetry observations. He is currently involved in CryoSat validation campaign, where he studies possible sources for errors in altimetry elevation estimates, and temporal and spatial variability in snow density and structure with the purpose of improving mass-change estimates derived from altimetry observations.

Tania Casal recently joined ESA as a Scientific Campaign Coordinator and is currently supervising activities for the Svalbard phase of this Arctic campaign. Tania’s background is in paleoclimatology and physical oceanography. More used to tropical climes than bitter Arctic conditions, she participated in several research cruises addressing issues such as meridional overturning circulation and heat flux as part of her PhD at the University of Miami and postdoctoral studies at the National Oceanic and Atmospheric Administration (NOAA). 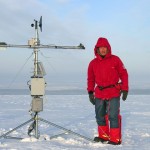 Thomas Schuler is an Associate Professor at the University of Oslo. His research has focused on several different aspects of glacier hydrology. As well as his role in science, he is also has a strong interest in ‘applied glaciology’. For example, he has acted as a consultant for a coal-mining company on Svalbard that is experiencing water intrusions from a glacier. He is also involved in projects studying the mass balance of glaciers and assessing their possible response to climate change. As such, he works out in the field acquiring data – and in this case, participating in the CryoSat campaign.

Henriette Skourup is a scientist at the Danish Technical University Space. She is responsible for acquisitions from the ASIRAS radar altimeter and laser scanner that are installed on a Twin Otter aircraft. The quality of these measurements is crucial to the success of the validation campaign. Henriette spent at least three months preparing for CryoVEx 2011.

Note: This blog is maintained by Honora Rider and the ESA web communication team.