Over the next several days from 28 April–16 May, Arctic ice-thickness surveys will be taking place north of Svalbard, along CryoSat ground tracks.

Airborne measurements of sea-ice thickness are being conducted by the Norsk Polarinstitutt (NPI) in the sea-ice pack north of Svalbard using an EM-Bird from a ship-based helicopter, in combination with field teams taking measurements of ice thickness from the Norwegian vessel RV Lance.

This AMSR-E satellite ice-concentration image shows the ice conditions north of Svalbard on 29 April, (Day 119) where this sea-ice component of the validation campaign is taking place.

The following ice chart from 28 April shows the corresponding interpretation of the sea-ice conditions by the Norwegian Met Service. 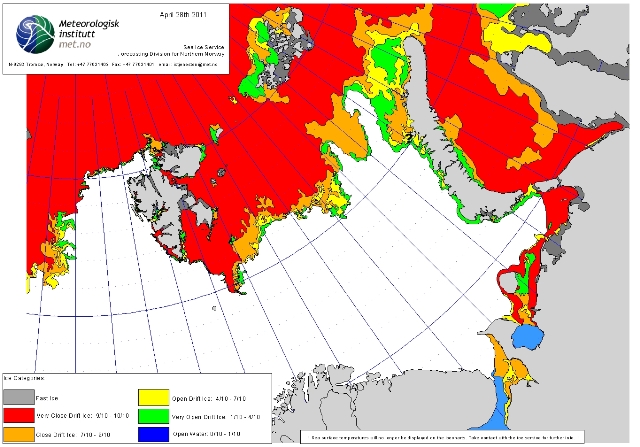 Finally the plot below shows the CryoSat orbital ground tracks overlaid onto the map of the average April sea-ice edge in grey (and indicating the black outline of Svalbard). It also shows the days of potential airborne underflights of CryoSat by the AWI Polar-5 with EM-Bird and DTU Twin Otter with ASIRAS. 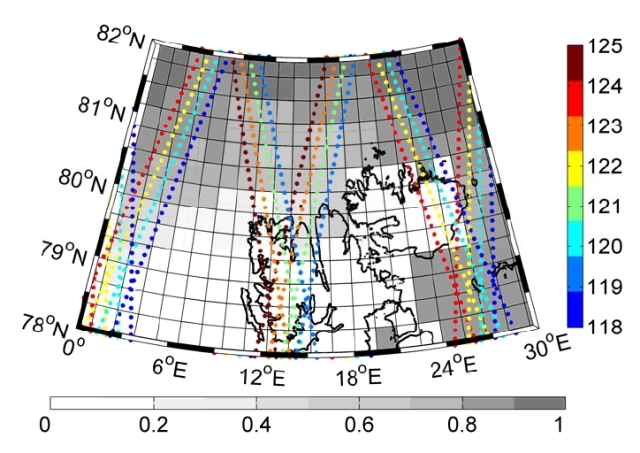 CryoSat tracks over Svalbard 28 April to 5 May (credits: ESA)

The trick is for the ground teams to seek the best possible sea-ice location, over which the combination of coincident surface, airborne and satellite-borne data acquisitions are possible.

Naturally, we wish the NPI teams out on the sea ice the best of luck with the combination of sea ice and flight (visibility) conditions. Currently the perspectives look best to the northeast of Svalbard, where the ice conditions currently appear to be most favourable. Stay safe out there!