Time to bid farewell to Alert

Time to leave Alert now, but here’s a quick update on the last couple of days here on the ice before we head off home.

The team before leaving for Resolute (credits: S. Laxon)

We were all very happy to have got the break in the weather we needed to land at our sites on the Arctic Ocean and we were even luckier that good weather continued to prevail at Alert. We were able to make it out onto the fast ice site on both the 17 and 18 April.

The ice has lots of lump and bumps so some careful skidoo driving by Seymour made sure the radar got to the site in one piece, but from then on it didn’t go so well for the radar we use on the ground.

The radar operates at 21°C, so there is a heating system inside its container. Usually it heats up pretty quickly, but we made the mistake of leaving it outside for an hour while we had our first hot lunch in days before we headed to the site. So, it took much longer than usual to heat up.

We spent a bit of time scouting out good test site, but just as it was approaching operating temperature our generator broke. Justin and Malcolm came to the rescue and headed back to the base to find a new one, while Rosie, Seymour and I got on with one of the snow-depth surveys around a corner reflector.

We eventually got the radar back up to temperature, but after already being out for eight hours or so, it was becoming very hard to keep our concentration and we decided to call it a day after taking a few calibration shots – which is definitely better than nothing.

Monday 18 April went much better. Stephan, from the Polar-5 team joined Seymour, Rosie and I on the ice, the radar kept its temperature well, the generator worked and we got all the measurements we had hoped to take the day before – and made it back for dinner. 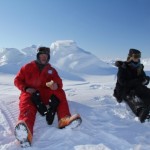 It was a really good day on the ice and a great way to end our experiment. We had lunch on the ice, but I’ve had enough of frozen sandwiches. We kept these ones warm in the radar box – but it only takes about 5 mins of them being exposed before they freeze solid.

There has been a pair of wolves roaming around the warehouse next to the airfield over the past couple of days. While we were waiting for permission to cross the airfield on our way to the fast ice site, one of them was basking in the sunshine next to us. 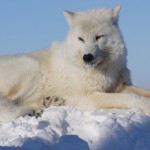 Today, just as we were about to leave in the Twin Otter for Resolute one of the wolves was hanging around, posing for photos.

Justin left his rucksack on the ground, turned his back and the wolf nicked it! Luckily the wolf dropped it when Justin chased him.