Spring cruise through the sea ice 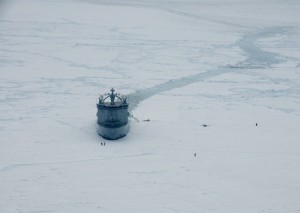 Icebreaker KV Svalbard and work on the ice (credits: A. Renner)

An international group of seven sea-ice scientists together with polar bear and ivory gull researchers left Longyearbyen on 4 April aboard the Norwegian coastguard vessel KV Svalbard, heading towards the sea ice north and northeast of Svalbard.

With the Norwegian Polar Institute’s (NPI) brand new EM-bird on board, we plan to collect data for the CryoSat campaign in a region that is not very often visited.

The EM-bird is an electromagnetic sounding instrument that we hang from a helicopter to take measurements. This one is called Liv – meaning ‘life’ in Norwegian.

After last year’s summer cruise to the same area, we were particularly interested to see what the ice conditions would be like in spring.

This time, the researchers from NPI were joined by scientists from the Dalian Technical University in China, the Nansen Environmental and Remote Sensing Centre in Bergen, the Norwegian Ice Service, and the University of Tromsø. 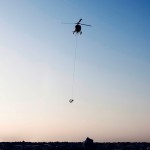 Despite tighter aviation safety rules that have led to stricter tests regarding helicopter operations, which delayed the departure, we were out on the ice in the evening of 5 April.

This was the first time for some of the team, so it brought home right away that we are operating in a rather unforgiving environment: –20° C, strong winds of over 20 knots, snow fall and low visibility made for a cold and tough time on the ice. Not ideal training conditions, but good for team building! 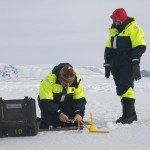 The next day brought better conditions and we were off on our first two flights. The ship was positioned close to the track of a CryoSat overpass. After a short flight along the track in the morning, we were in the air again to measure simultaneously with CryoSat overhead. A good first ‘real’ outing for Liv!

The flights were complemented by on ice work where a lot of ground-electromagnetic (EM31) data, snow- thickness data, and observations of physical properties of snow and ice were collected. These included snow and ice densities, temperature and salinity profiles through the ice, detailed snow pits with snow layer and crystal analysis and snow moisture measurements. Along the EM31 lines, we also measured ice thickness and ice freeboard via drill holes.

Since we shared ship and helicopter with polar bear people, they had the chopper the next couple of days and we stayed in fjord fast ice. 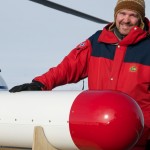 Sebastian with our EM-bird (credits: A. Renner)

The next opportunity for a CryoSat flight came on the 9 April. This time we also took photos of the ice beneath the helicopter. In sunny but still very windy conditions, we covered good ground over the typical ice we found during the entire cruise: lots of large first-year ice floes with some nice ridges and new ice in the leads.|

Cryosat-2 is not the only satellite we are collecting ground-truth data for, and on 12 April we managed to do a flight concurrent with a high-resolution SAR Radarsat-2 qual-pol image. This was a difficult operation due to heavy ice challenging the ice breaking capabilities of our vessel, and a second helicopter arriving just half an hour before the image acquisition time

The following day, we planned another Cryosat-2 underflight, but the weather came in with snow and fog and we were grounded. More time for on ice work!

Now, the helicopter has left and we are heading west for a last stop before returning to Longyearbyen. By then, we will have covered a large part of the region north of Svalbard and gained good insight into the regional conditions. 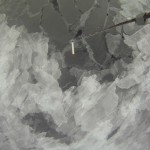 Looking down from the helicopter showing the EM-bird (credits: A. Renner)

Embracing all the problems and challenges, we managed to get a good dataset to describe the snow and ice cover we found in this remote region. The maiden voyage of Liv, our EM-bird, was a success and we are looking forward to the next cruise starting in 10 days!

More CryoSat activities are waiting for us then and we’ll keep you posted!