Living with a comet: A ROSINA team perspective 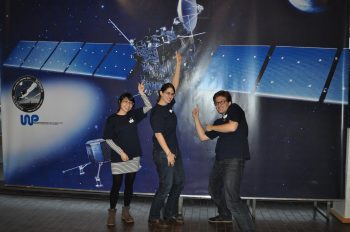 Rosetta’s ROSINA (Rosetta Orbiter Spectrometer for Ion and Neutral Analysis) suite of instruments have made plenty of big headlines over the last two years, with the surprising discovery of molecular oxygen and nitrogen and the ‘flavour’ of the comet’s water being different to Earth’s among them. ROSINA principal investigator Kathrin Altwegg and colleagues reflect on the highs and lows of the 40-strong team of scientists and technicians since Rosetta woke up from deep space hibernation on 20 January 2014. 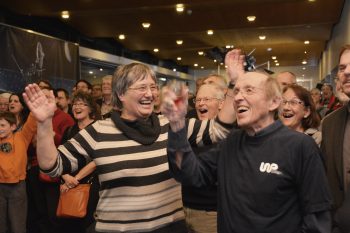 Things actually did not get off to a particularly good start for us: all three of our sensors gave us error event messages when we first switched them on in the April after hibernation exit. There was a flurry of emails from the operations team on duty at the time querying just how unexpected these events were supposed to be. It turned out that the problem was due to the detector temperature of the DFMS [Double Focusing Mass Spectrometer]: it was at -30.8°C while the limit for operation is -30°C! 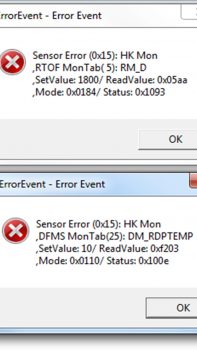 In addition, one of the RTOF [Reflectron Time-of-Flight] parameters was wrongly set and COPS [Comet Pressure Sensor] was too cold causing wrong offset values. The problems were solved three weeks later by a software patch and turning the spacecraft such that DFMS could bathe in the Sun and warm up.

Once we arrived at the comet on 6 August, and from then on, we could clearly see the comet in COPS data and in our mass spectra, which showed the rotation of the comet and the location of Rosetta over the northern (summer) and southern (winter hemisphere).

ROSINA research scientist Myrtha Hässig recalls she was trying on some clothes in a store in downtown San Antonio on a Saturday afternoon that August, when she got a call from her boss saying she should immediately look at the ROSINA data because ‘they are strange’. Myrtha said this phone call resulted in getting no new clothes, but instead the first detection of the coma heterogeneity! The result was reported in Science (and on this blog) in January 2015. 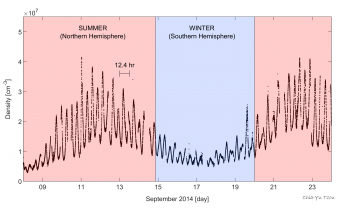 Early COPS data, which showed the rotation of the comet and the location of Rosetta over the northern (summer) and southern (winter hemisphere). Image courtesy K. Altwegg.

It was in October 2014, when Rosetta was 10 km from the comet surface, that ROSINA made the first detections of nitrogen and argon in the comet’s coma.

We could almost have concluded the mission there! With the deuterium in water, noble gas and nitrogen and a lot of organics detected we had already reached our major goals for this mission. It made us really proud to have such beautiful instruments – thank you to everyone who helped built them!

It was also in October that we blogged about the ‘perfume’ of the comet. The headline: “The comet smells of horse manure” was used in a Swiss Farmers newspaper, and was the first time a scientific space mission was reported in this newspaper 🙂 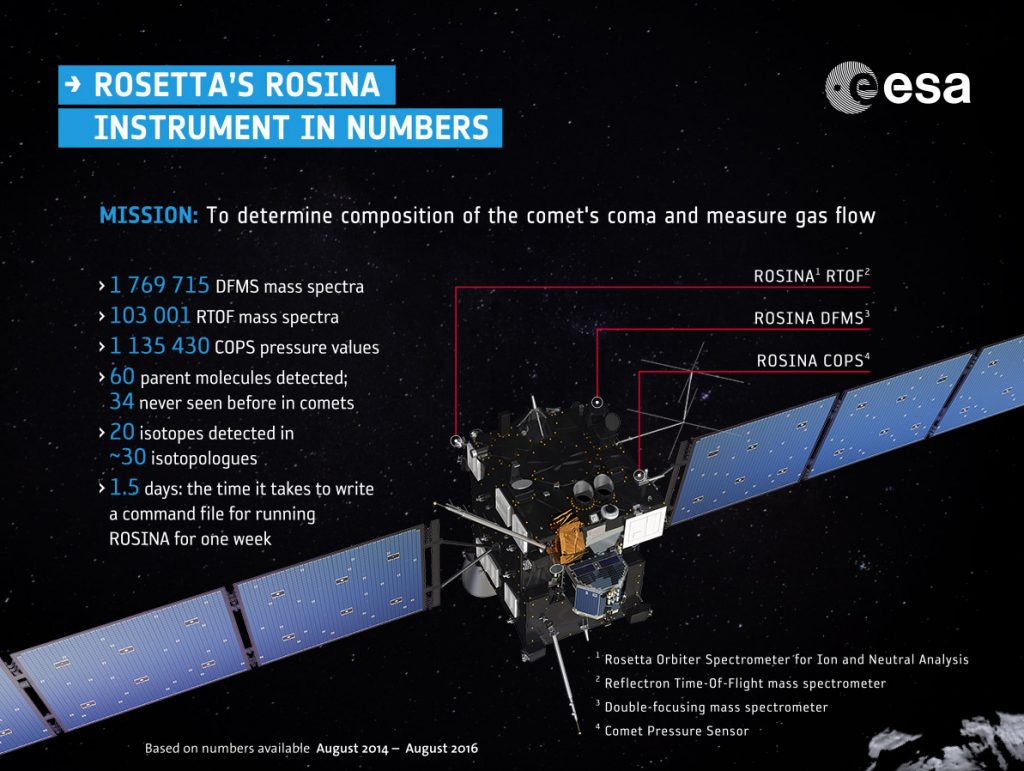 I remember talking to Martin Hilchenbach after I had first presented the ‘scent’ of the comet during a Rosetta team meeting in the September. He said: “What you have told us this morning about all the smelly stuff from the comet tells me that the comet is not habitable. For that it should at least have some alcohol to drink”. I then looked for ethanol in the data…and there it was! So 67P is habitable!

In another ROSINA team meeting Martin Rubin told me: “There is a peak on mass 23”. I told him that could not be possible, because only sodium has mass 23 and that’s a refractory. We never saw any signal on mass 23 during the whole Giotto mission, not one single count. Martin replied: “but there are also peaks on mass 28, 29, 30, 39, 40. Could be silicon and potassium”. Then Peter Wurz responded: “Wow! Must be solar wind sputtering, we always postulated this, but probably nobody believed it!’” (Read our blog write up about that here).

On another occasion when I needed a lot of convincing Martin told me: “We have a strange oxygen peak in the DFMS spectra. Could this be cometary?” I said: of course not, it is well known that O2 cannot survive in the early Solar System as it is far too reactive. But it’s a bad sign. We probably have a major source of contamination. Let’s wait and see if it gets smaller. Two months later another colleague reported “the oxygen signal is still there, even higher than before and it varies with the cometary distance.” At this point I conceded that it did indeed look cometary, but I still needed convincing. It simply couldn’t be, could it? Six months later, another colleague again tells me “We have to publish the O2 immediately. I heard that Alice [another instrument on Rosetta] is also detecting O2.” But I still wanted to wait until after equinox to be completely sure…. In the end we published, in Nature, in October 2015.” 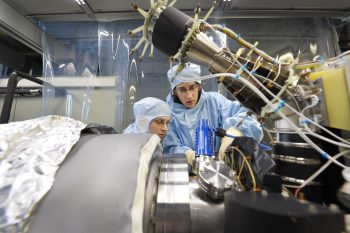 Ursina Calmonte (right) and Myrtha Hässig (left) with the ROSINA DFMS and the comet simulator CASYMIR. Photo by T. Wuethrich.

After this initial discovery period, and after the operations around Philae’s landing, the spacecraft was back at about 30 km distance from the comet for a while. We were not so happy because without so much comet activity at that time we couldn’t make such good measurements as we had in October, from 10 km. But then came the close 6 km flyby in February 2015. Again we had a bad start, with COPS misbehaving, giving pressure alerts and switching off the mass spectrometers. But just in time for the closest approach, the sensors start working again and showed very nice organic material from cometary dust!

Then, in March, the spacecraft had a safe mode, during another close flyby, forcing it far from the comet again. In the end this turned out to be a good thing for ROSINA. Even though we were far from the comet, we were still ‘feeling’ the cometary coma. The comet fought back, it showed us that it is unpredictable and that planning has to be flexible around such a body. 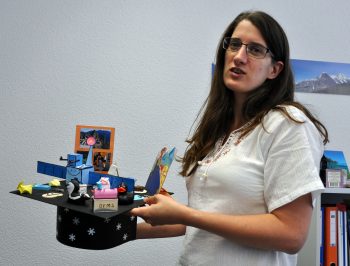 ROSINA PhD graduate Dr Ursina Calmonte with the thesis: “Sulfur Isotopic Ratios at 67P/Churyumov-Gerasimenko and Characterization of ROSINA-DFMS FM and FS”, with her ‘PhD hat’ made by the ROSINA team. Image courtesy K. Altwegg.

As the comet became more active around perihelion, then ROSINA enjoyed some outbursts, and detected lots of organics. Additional detections of glycine were made during this time of increased activity – it had first been seen in October 2014, 10 km from the comet, and during the March flyby, 30-15 km from the comet. The first time I spotted glycine in the data I was on a 9-hour train journey and didn’t know quite what I was looking at at first. I wish I had paid more attention in chemistry lectures! The spectra were very complicated and I was trying to work out which molecules fit. I remember thinking “Oh, that seems to be glycine, an amino acid!”

Soon after perihelion, Rosetta went on a far excursion some 1500 km from the nucleus, to study the coma at large, and especially to explore the plasma environment further from the nucleus. There wasn’t so much for ROSINA to measure during such far excursions, but we used this time to do calibration work in the lab on the twin instruments. 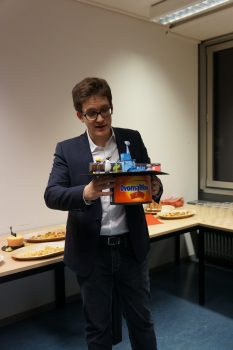 ROSINA PhD graduate Dr Sébastien Gasc (a chocolate addict!) with the thesis: “Sensitivity and Fragmentation Calibration of the ROSINA Reflectron-type Time-of-Flight Mass Spectrometer” – with his PhD hat made by the ROSINA team. Image courtesy K. Altwegg.

There was often some quite intense discussion – ‘fighting’ – within the Science Working Team (SWT) to put the spacecraft on the best trajectory or position with respect to the comet to get the best science for each instrument. Some you win, some you lose. I had been asking for a long period of observation since a planning meeting in December 2015. I really wanted to try and measure krypton and xenon before the end of the mission, as they’re really important measurements for cosmogeology. But, we would have to look constantly at the nucleus for a long time, which was not optimal for some of the other instruments. I had to be realistic, and balance political reality versus scientific needs, and determined that three weeks as close as possible to the comet, nadir-looking, would do the trick. And it did! The SWT agreed to implement three weeks in a row of priority time in May 2016, something we had waited for during the whole mission. And on the very first day we detected krypton and xenon! By the end of the three weeks we had just enough statistics to be able to make significant statements about the abundances of the noble gases as well as their isotopic ratios (the analysis of which is ongoing). What a feast! Thanks to all the other instrument teams who clearly were not happy during this time!

In the last month, Rosetta has been getting much closer to the comet again. We’re really excited about the final descent, as it will give us uninterrupted data from about 20 km to the impact point – we’ll get an unprecedented profile for the coma structure.

It will be a beautiful end to an exciting, but also very intense mission.