Rosetta makes first detection of molecular nitrogen at a comet

This news release is mirrored from the ESA portal, published on the occasion of the publication of the paper “Molecular nitrogen in comet 67P/Churyumov-Gerasimenko indicates a low formation temperature,” by M. Rubin et al. in the journal Science.

ESA’s Rosetta spacecraft has made the first measurement of molecular nitrogen at a comet, providing clues about the temperature environment in which Comet 67P/Churyumov–Gerasimenko formed.

Rosetta arrived last August, and has since been collecting extensive data on the comet and its environment with its suite of 11 science instruments.

The in situ detection of molecular nitrogen has long been sought at a comet. Nitrogen had only previously been detected bound up in other compounds, including hydrogen cyanide and ammonia, for example. 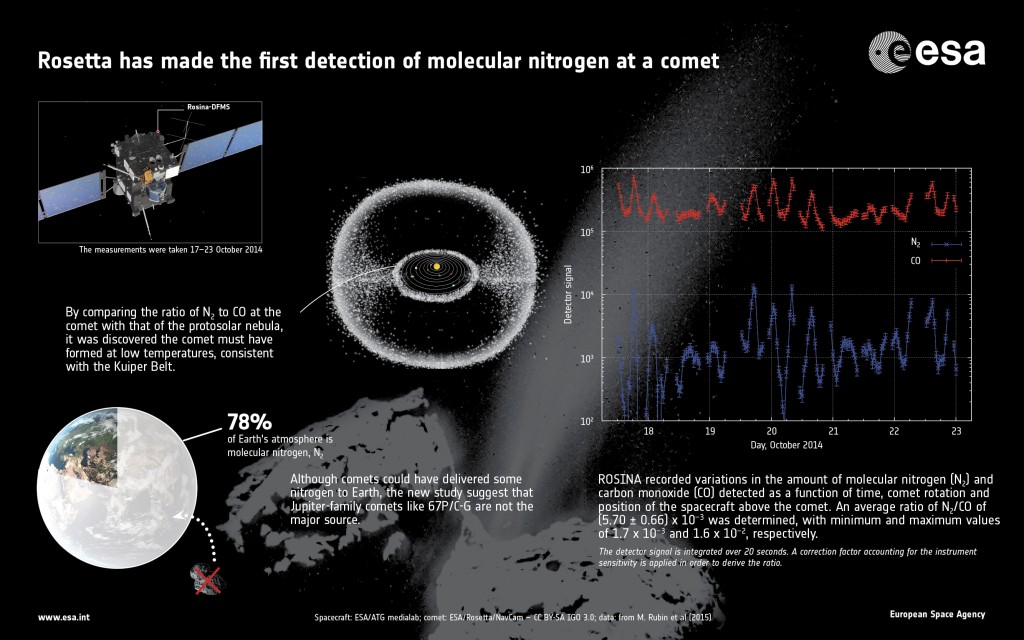 Its detection is particularly important since molecular nitrogen is thought to have been the most common type of nitrogen available when the Solar System was forming. In the colder outer regions, it likely provided the main source of nitrogen that was incorporated into the gas planets. It also dominates the dense atmosphere of Saturn’s moon, Titan, and is present in the atmospheres and surface ices on Pluto and Neptune’s moon Triton.

It is in these cold outer reaches of our Solar System in which the family of comets that includes Rosetta’s comet is believed to have formed.

The new results are based on 138 measurements collected by the Rosetta Orbiter Spectrometer for Ion and Neutral Analysis instrument, ROSINA, during 17–23 October 2014, when Rosetta was about 10 km from the centre of the comet.

“Identifying molecular nitrogen places important constraints on the conditions in which the comet formed, because it requires very low temperatures to become trapped in ice,” says Martin Rubin of the University of Bern, lead author of the paper presenting the results published today in the journal Science.

The trapping of molecular nitrogen in ice in the protosolar nebula is thought to take place at temperatures similar to those required to trap carbon monoxide. So in order to put constraints on comet formation models, the scientists compared the ratio of molecular nitrogen to carbon monoxide measured at the comet to that of the protosolar nebula, as calculated from the measured nitrogen to carbon ratio in Jupiter and the solar wind.

That ratio for Comet 67P/Churyumov–Gerasimenko turns out to be about 25 times less than that of the expected protosolar value. The scientists think that this depletion may be a consequence of the ice forming at very low temperatures in the protosolar nebula.

One scenario involves temperatures of between roughly –250ºC and perhaps –220ºC, with relatively inefficient trapping of molecular nitrogen in either amorphous water ice or cage-like water ice known as a clathrate, in both cases yielding a low ratio directly.

Alternatively, the molecular nitrogen could have been trapped more efficiently at even lower temperatures of around –253ºC in the same region as Pluto and Triton, resulting in relatively nitrogen-rich ices as seen on them.

Comet 67P/Churyumov-Gerasimenko is a Jupiter-family comet. Its 6.5 year journey around the Sun takes it from just beyond the orbit of Jupiter at its most distant, to between the orbits of Earth and Mars at its closest. The comet hails from the Kuiper Belt, but gravitational perturbations knocked it towards the Sun where interactions with Jupiter’s gravity set it on its present-day orbit. Credits: ESA

Subsequent heating of the comet through the decay of radioactive nuclides, or as Rosetta’s comet moved into orbits closer to the Sun, could have been sufficient to trigger outgassing of the nitrogen and thus a reduction of the ratio over time.

“This very low-temperature process is similar to how we think Pluto and Triton have developed their nitrogen-rich ice and is consistent with the comet originating from the Kuiper Belt,” says Martin.

The only other body in the Solar System with a nitrogen-dominated atmosphere is Earth. The current best guess at its origin is via plate tectonics, with volcanoes releasing nitrogen locked in silicate rocks in the mantle.

However, the question remains as to the role played by comets in delivering this important ingredient.

“Just as we wanted to learn more about the role of comets in bringing water to Earth , we would also like to place constraints on the delivery of other ingredients, especially those that are needed for the building blocks of life, like nitrogen,” says Kathrin Altwegg, also at the University of Bern, and principal investigator for ROSINA.

To assess the possible contribution of comets like Rosetta’s to the nitrogen in Earth’s atmosphere, the scientists assumed that the isotopic ratio of 14N to 15N in the comet is the same as that measured for Jupiter and solar wind, which reflects the composition of the protosolar nebula.

However, this isotopic ratio is much higher than measured for other nitrogen-bearing species present in comets, such as hydrogen cyanide and ammonia.

Earth’s 14N/15N ratio lies roughly between these two values, and thus if there was an equal mix of the molecular form on the one hand, and in hydrogen cyanide and ammonia on the other in comets, it would be at least conceivable that Earth’s nitrogen could have come from comets.

“However, the amount of nitrogen found in 67P/Churyumov–Gerasimenko is not an equal mix between molecular nitrogen and the other nitrogen-bearing molecules. Rather, there is 15 times too little molecular nitrogen, and therefore Earth’s 14N/15N ratio cannot be reproduced through delivery of Jupiter family comets like Rosetta’s,” says Martin.

“It’s another piece of the puzzle in terms of the role of Jupiter-family comets in the evolution of the Solar System, but the puzzle is by no means finished yet,” says ESA’s Rosetta project scientist, Matt Taylor.

“Rosetta is about five months away from perihelion now, and we’ll be watching how the composition of the gases changes over this period, and trying to decipher what that tells us about the past life of this comet.”

“Molecular nitrogen in comet 67P/Churyumov-Gerasimenko indicates a low formation temperature,” by M. Rubin et al is published in the 20 March issue of the journal Science. 10.1126/science.aaa6100

ROSINA is the Rosetta Orbiter Spectrometer for Ion and Neutral Analysis instrument and comprises two mass spectrometers: the Double Focusing Mass Spectrometer (DFMS) and the Reflectron Time of Flight mass spectrometer (RTOF) – and the COmetary Pressure Sensor (COPS). The measurements reported here were conducted with DFMS. The ROSINA team is led by Kathrin Altwegg of the University of Bern, Switzerland.

The 14N/15N ratio for the N2 in Comet 67P/Churyumov–Gerasimenko is assumed to be 441, the value for the protosolar nebula as measured from Jupiter and the solar wind, while the corresponding value for nitrogen in hydrogen cyanide and ammonia is 130, as measured at other comets. The value for the Earth’s nitrogen is 272.