Just in time to coincide with today’s orbit correction manoeuvre, we have a great blog update contributed by Kathrin Altwegg, from the ROSINA science team at the University of Bern.

A spacecraft is made out of terrestrial materials like carbon fibres, synthetic material, glue and electronic components, and it carries fuel – which in the case of Rosetta is Monomethylhydrazine. It burns with an oxidizer to form mostly water.

For the first time, a spacecraft is also equipped with a pressure sensor and the mass spectrometers of the Rosetta Orbiter Spectrometer for Ion and Neutral Analysis (ROSINA) instrument that are sensitive enough to measure the intrinsic outgassing of the spacecraft.

While we have observed throughout the mission many traces of the spacecraft’s materials ranging from water to heavy hydrocarbons, solvents and vacuum grease, recently – following the ‘Big Burn’ thruster manoeuvres – ROSINA scientists observed very large signals from hydrazine and from the product of its burning. 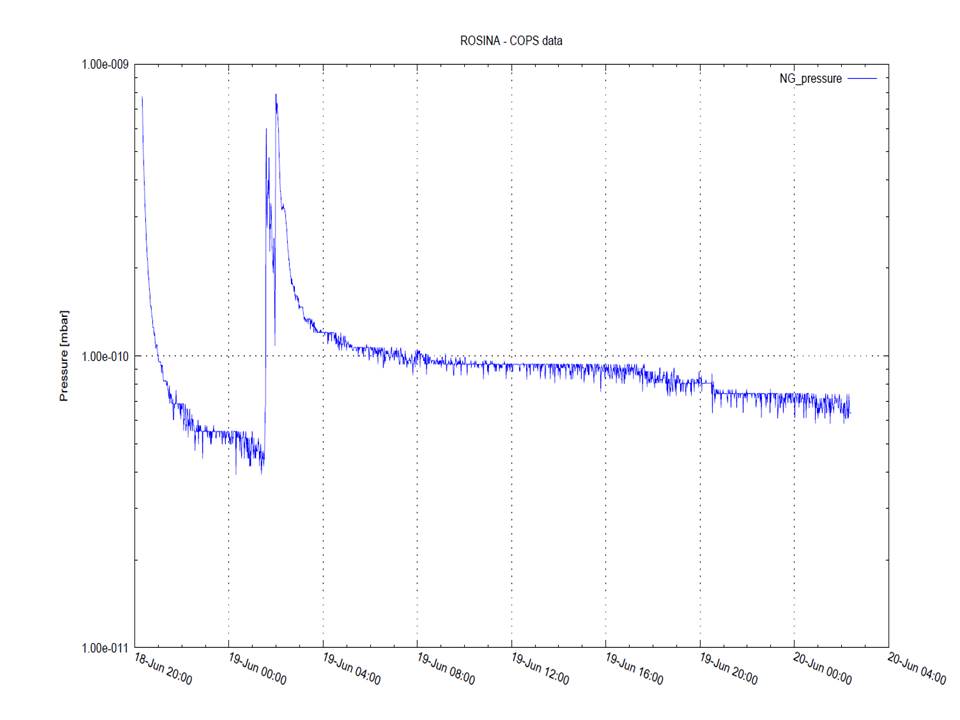 COPS pressure variation during a spacecraft slew, 12 hours after a manoeuvre. The big peak is due to the evaporation of water from the spacecraft when the Sun is shining on its bottom side, producing an acceleration of a few micrometers per s^2, which results in a total delta-V over several hours of a few mm/s. Image courtesy K. Altwegg.

This material is deposited near the thrusters and stays there until the spacecraft slews, such that the Sun is shining on these areas. Immediately, large pressure peaks can be seen by ROSINA’s Comet Pressure Sensor (COPS) and the material can be analysed by ROSINA’s Double Focusing Mass Spectrometer.

Not only do the ROSINA detectors see the aftermath of the burn, the spacecraft itself experiences a recoil when the material evaporates, leading to additional acceleration forces long after the end of each manoeuvre.

While this is interesting to observe, the observations at the comet have to be carefully considered and the instrument measurements carefully calibrated, as the material from Rosetta that is outgassing is not very different from the expected cometary material. Care has to be taken to distinguish between the two in order not to misinterpret terrestrial material from Rosetta as ‘new’ science results from the comet.

However, it’s worth noting that we have passed the period of large thruster firings, so the manoeuvres are getting smaller and thus the hydrazine levels around the spacecraft will be much reduced.

These measurements demonstrate the challenges we face when flying such instrumentation with unprecedented sensitivity in space. These are expected challenges and part of instrument science and calibration.

Let’s hope 67P/Churyumov-Gerasimenko does not consist of hydrazine!

Read about the ROSINA instruments during the re-commissioning period here; and see yesterday’s blog post – Four done, six to go: burning down to comet rendezvous – for details on today’s “FAT” burn.