Rosetta has detected the noble gases krypton and xenon while flying close to Comet 67P/Churyumov-Gerasimenko last month. The detections were made during dedicated orbits between 10 and 31 May, which took the spacecraft to within 10 km of the comet’s surface, and sometimes as close as 5 km.

The discovery was highlighted today by Kathrin Altwegg, Principal Investigator of the ROSINA instrument that made the detections, during a Royal Society meeting on ‘Cometary science after Rosetta ’ in London, UK.

“We had sporadic hints of krypton while briefly flying at 12 km in early March, but the confirmation was only possible thanks to a longer period of observation during these close orbits,” she says. “Noble gases bound up inside the comet very easily escape into space through sublimation, so detecting them can be difficult – we needed to be close to get a good ‘sniff’ when the gases are first emitted from the nucleus.”

Of the naturally occurring noble gases – helium, neon, argon, krypton, xenon, and radon – Rosetta had already detected argon, during 10 km orbits of the comet  in October 2014. Since then, the comet has passed through perihelion, its closest point to the Sun along its orbit and as such its most active period, forcing the spacecraft to retreat to safe distances several hundred kilometres from the nucleus for many months. But with activity much diminished, the spacecraft is now able to return to closer distances once again, providing another opportunity to search for these rare but important gases before the end of the mission.

“The isotopic signatures of these and other gases already detected at the comet act as tracers for the origin of the comet’s building blocks, for example to better understand the physical and chemical properties of the environment in which they formed,” describes Kathrin. “As such it is a key goal of the Rosetta mission to detect them.” 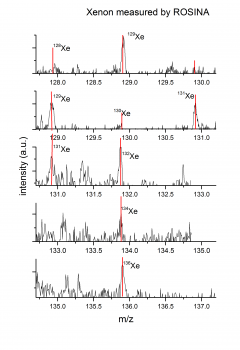 Noble gases rarely react chemically with other elements to form molecules, mostly remaining in a stable atomic state, and are therefore representative of the environment around a young star in which planets, comets, and asteroids are born.

Their abundance and isotopic compositions can also be compared to the values known for Earth and Mars, and for the solar wind and meteorites, for example. The relative abundance of noble gases in the atmospheres of terrestrial planets is largely controlled by early planetary evolution, including outgassing via geological processes, atmospheric loss, and/or delivery by asteroid or cometary bombardment. Thus the study of noble gases in comets can also provide information on these processes. Not only that, but it is also an important step in determining if comets of this type played any significant role in the noble gas inventory of the terrestrial planets.

Detailed analysis of the krypton and xenon detections and their implications on the origin of Comet 67P/C-G, as well as on the wider questions concerning the role of comets in Solar System evolution in general, is now underway.