ESA’s Rosetta downlink and archive teams are very happy to announce the release today of the first wave of Rosetta instrument data from the “comet pre-landing phase” via the Planetary Science Archive. Data from four instruments are included in this release: COSIMA, OSIRIS, ROSINA, and RPC-MAG. 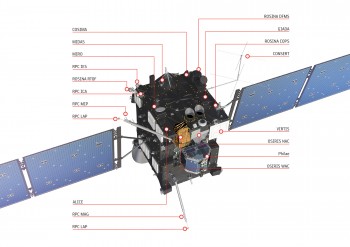 After Rosetta woke up from 31 months hibernation in January 2014, its scientific instruments were turned back on and checked out before being used to study Comet 67P/Churyumov-Gerasimenko during the approach, rendezvous, and escort phases.

As agreed between ESA and the funding bodies responsible for Rosetta’s instruments, their data are initially made available to the corresponding scientific teams for first analysis, with a significant number of Rosetta papers published based on these data, as described in previous blog posts.

After a nominal period of 6 months, the scientific data themselves are to be delivered to ESA to be placed in the public domain via the Planetary Science Archive (PSA) for use by all scientists and the wider public. In practice, it was agreed to deliver data to ESA for release in blocks, and the first of those blocks was defined as the ‘pre-landing phase’, i.e. covering the period from January 2014 to just after Philae’s landing on the comet in mid-November 2014.

This led to a date of 19 May for the instrument teams to deliver the data from that phase to ESA, following which, a very significant effort had to be made by the ESA team to process the datasets of the many instruments involved and prepare them for release.

What did this processing entail? Firstly, the data and the associated metadata had to be checked for completeness and for compliance with standard formats to ensure that they can be downloaded and analysed by other scientists in a transparent manner.

This involved interactions between all of the instrument teams, the ESAC-based downlink and archive teams, and the Planetary Data System (PDS – Small Bodies Node) team located in the US to ensure the data format and contents complied with the PDS standards.

These complex checks and interactions have taken quite some time, in part because this was the first major data delivery from the comet phase to ESA from the whole instrument suite. For some instruments, the datasets are vast, with up to 8 months of scientific measurements, pushing processing systems to the limit. In the majority of cases, this procedure has necessitated updates to an instrument’s data pipeline, resulting in the need for the data to be re-processed, re-delivered, and checked once more.

Today sees the first release of pre-landing phase data from four of Rosetta’s instruments, representative of the wide scientific scope of the orbiter. COSIMA collects and analyses dust grains around the comet; OSIRIS uses its Narrow and Wide Angle Cameras to take multi-wavelength visible and near-infrared images of the nucleus, activity rising from its surface, and the immediate coma; ROSINA has two mass spectrometers to sniff and analyse the gases and RPC-MAG studies the magnetic field in the environment of the comet,

The data being released are described in more detail below:

COSIMA (COmetary Secondary Ion Mass Analyser):
This dataset includes images of dust particles collected in the environment of Comet 67P/C-G from the nucleus approach phase until 19 November 2014, along with secondary ion mass spectra for some of those particles.

OSIRIS (Optical, Spectroscopic, and Infrared Remote Imaging System)
This dataset covers the first part of the pre-landing phase from 20 March to 12 June 2014, comprising four sets each for the Narrow Angle Camera and the Wide Angle Camera, and consisting of 2203 images in total. It contains the early light curve observations used to make a precise determination of rotation period and orientation of the rotation axis of Comet 67P/C-G. It also includes the outburst observed in April/May 2014 and the development of the dusty coma around the cometary nucleus. The data were processed with the new, re-developed OSIRIS calibration pipeline including recent updates from the in-flight calibration campaigns.

ROSINA (Rosetta Orbiter Spectrometer for Ion and Neutral Analysis)
This dataset covers the period March to November 2014, and contains 100 Gbytes of data consisting of 685,234 tables and 1.3 billion rows. These are currently “level 2” data, meaning more or less as received from the spacecraft, followed by decompression and the addition of metadata including the distance to the comet, direction of the Sun, and the spacecraft pointing. Future releases will be at a higher, more directly usable level containing mass spectra with physical units (e.g. detected particles vs. mass); further work is necessary to ensure that this is achieved in a consistent manner.

RPC-MAG (Rosetta’s Plasma Consortium MAGnetometer)
This dataset contain time series of the magnetic field measurements made in situ on Rosetta. RPC-MAG comprises two tri-axial fluxgate magnetometers that are able to register the three components of the magnetic field vector at a maximum sampling rate of 20 Hz. Observations have been made quasi permanently since May 2014, and the dataset covers from then until 19 November. Further processing of the data is on-going in order to reduce contamination due to changing spacecraft bias fields.

Access to these instrument datasets can be made here.

OSIRIS images added to Archive Image Browser
In addition to the data being released today to the PSA, the downlink and archive team is pleased to release an update of the Archive Image Browser. As well as images from Rosetta’s NAVCAM, this “easy access tool” now includes OSIRIS images from the Earth, Mars, and asteroid fly-bys that occurred between 2005 and 2010 en-route to the comet, and a “first processed” version of the images from today’s pre-landing phase release. Further processing of the OSIRIS pre-landing images in the image browser will be performed in the mid-late August timeframe.

Upcoming data deliveries
While it has taken quite some time to process and release all the pre-landing datasets delivered, we anticipate that future processing will be more efficient and timely. The Philae lander instrument teams have delivered the data that formed the basis of the seven papers published in Science last week, and the next comet phase data delivery from the orbiter instrument teams is planned for mid-September (covering 19-Nov to 10-Mar 2015). With the corrected pipelines now producing data formats consistent with the archive standards, we expect to be able to archive and release those data more rapidly thereafter. The aim is to have the current Rosetta and Philae datasets released by mid-September.

It is important to realise that even after today’s first release, this process remains a work-in-progress. As more is learned about the calibration of the various instruments from in-flight measurements, and as feedback is received from the instrument teams and external users, these data may be re-processed and released again into the archives. This is standard practice and ensures that the data found in the archives always reflect the current best understanding of the complex instruments that produced them. A case in point is the current OSIRIS dataset, where issues still remain with their pipeline: a second version will be released to the PSA by September to correct for such problems.

Beyond the formal validation steps, a scientific review of these Rosetta pre-landing data is scheduled to take place at the beginning of 2016. This review will assess the scientific usefulness of the data and may lead to updates being made to various instrument datasets to incorporate proposed improvements in this regard.

At a higher level, the goal of the activities described in this post is to ensure that the products entering the archive are well documented and remains compatible with changing computer hard- and software systems, so that they can be used far into the future,

For example, we can now retrieve archival data from Giotto’s mission to Comet Halley in 1986 and re-analyse it with Rosetta’s discoveries in mind. We are still finding valuable and surprising information in these old data, which in turn enhances the science return from Rosetta. But the prerequisite for this is to adhere to very strict rules: a difficult task but worthwhile in the long run to maximise the legacy of the Rosetta mission.