This news item is mirrored from the main ESA web portal.

Rosetta’s continued close study of Comet 67P/Churyumov–Gerasimenko has revealed an unexpected process at work, causing the rapid breakup of water and carbon dioxide molecules spewing from the comet’s surface. 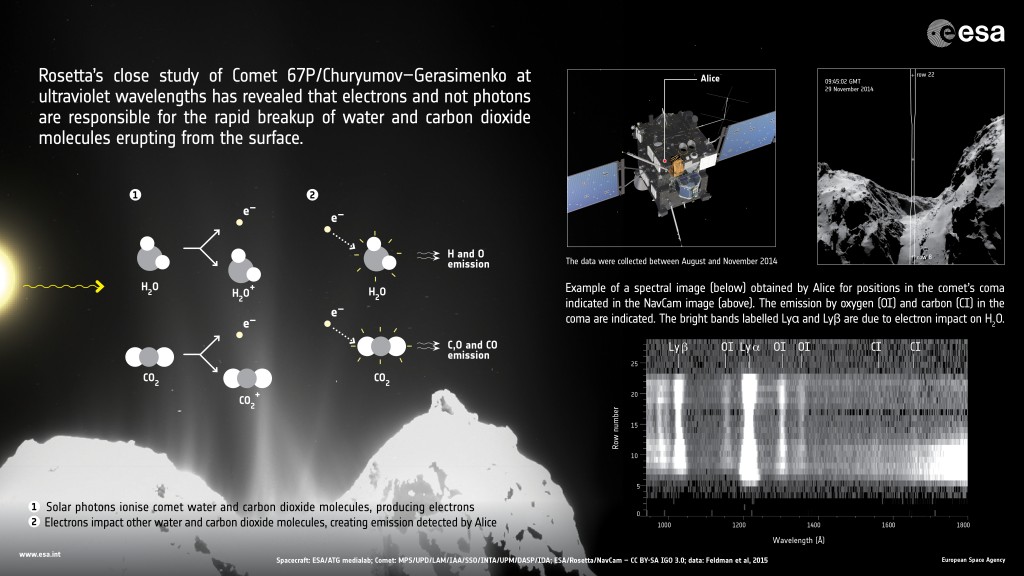 ESA’s Rosetta mission arrived at the comet in August last year. Since then, it has been orbiting or flying past the comet at distances from as far as several hundred kilometres down to as little as 8 km. While doing so, it has been collecting data on every aspect of the comet’s environment with its suite of 11 science instruments.

One instrument, the Alice spectrograph provided by NASA, has been examining the chemical composition of the comet’s atmosphere, or coma, at far-ultraviolet wavelengths.

At these wavelengths, Alice allows scientists to detect some of the most abundant elements in the Universe such as hydrogen, oxygen, carbon and nitrogen. The spectrograph splits the comet’s light into its various colours – its spectrum – from which scientists can identify the chemical composition of the coma gases.

In a paper accepted for publication in the journal Astronomy and Astrophysics, scientists report the detections made by Alice from Rosetta’s first four months at the comet, when the spacecraft was between 10 km and 80 km from the centre of the comet nucleus.

For this study, the team focused on the nature of ‘plumes’ of water and carbon dioxide gas erupting from the comet’s surface, triggered by the warmth of the Sun. To do so, they looked at the emission from hydrogen and oxygen atoms resulting from broken water molecules, and similarly carbon atoms from carbon dioxide molecules, close to the comet nucleus.

They discovered that the molecules seem to be broken up in a two-step process.

First, an ultraviolet photon from the Sun hits a water molecule in the comet’s coma and ionises it, knocking out an energetic electron. This electron then hits another water molecule in the coma, breaking it apart into two hydrogen atoms and one oxygen, and energising them in the process. These atoms then emit ultraviolet light that is detected at characteristic wavelengths by Alice.

Similarly, it is the impact of an electron with a carbon dioxide molecule that results in its break-up into atoms and the observed carbon emissions.

“Analysis of the relative intensities of observed atomic emissions allows us to determine that we are directly observing the ‘parent’ molecules that are being broken up by electrons in the immediate vicinity, about 1 km, of the comet’s nucleus where they are being produced,” says Paul Feldman, professor of physics and astronomy at the Johns Hopkins University in Baltimore, and lead author of the paper discussing the results.

By comparison, from Earth or from Earth-orbiting space observatories such as the Hubble Space Telescope, the atomic constituents of comets can only be seen after their parent molecules, such as water and carbon dioxide, have been broken up by sunlight, hundreds to thousands of kilometres away from the nucleus of the comet.

“The discovery we’re reporting is quite unexpected,” says Alice Principal Investigator Alan Stern, an associate vice president in the Space Science and Engineering Division of the Southwest Research Institute (SwRI).

“It shows us the value of going to comets to observe them up close, since this discovery simply could not have been made from Earth or Earth orbit with any existing or planned observatory. And, it is fundamentally transforming our knowledge of comets.”

“By looking at the emission from hydrogen and oxygen atoms broken from the water molecules, we also can actually trace the location and structure of water plumes from the surface of the comet,” adds co-author Joel Parker, an assistant director in SwRI’s Space Science and Engineering Division in Boulder, Colorado.

The team likens the break-up of the molecules to the process that has been proposed for the plumes on Jupiter’s icy moon Europa, except that the electrons at the comet are produced by solar photons, while the electrons at Europa come from Jupiter’s magnetosphere.

The results from Alice are supported by data obtained by other Rosetta instruments, in particular MIRO, ROSINA and VIRTIS, which are able to study the abundance of different coma constituents and their variation over time, and particle detecting instruments like RPC-IES.

“These early results from Alice demonstrate how important it is to study a comet at different wavelengths and with different techniques, in order to probe various aspects of the comet environment,” says ESA’s Rosetta project scientist Matt Taylor.

“We’re actively watching how the comet evolves as it moves closer to the Sun along its orbit towards perihelion in August, seeing how the plumes become more active due to solar heating, and studying the effects of the comet’s interaction with the solar wind.”

“Measurements of the near-nucleus coma of Comet 67P/Churyumov-Gerasimenko with the Alice far-ultraviolet spectrograph on Rosetta,” by P Feldman et al is accepted for publication in Astronomy and Astrophysics. The paper is available to read online, here: https://www.aanda.org/10.1051/0004-6361/201525925