In a recent paper published in the Astrophysical Journal Letters, the GIADA team present their findings on the properties of dust particles from Comet 67P/Churyumov-Gerasimenko. This blog post has been prepared with inputs from lead author Marco Fulle, and GIADA principal investigator Alessandra Rotundi. 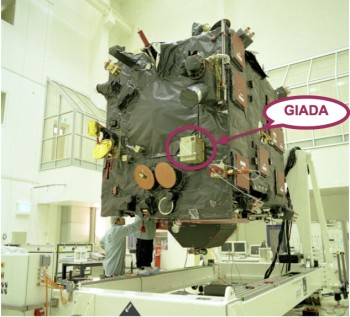 The location of GIADA marked on the Rosetta spacecraft.
Image courtesy Alessandra Rotundi

GIADA, the Grain Impact Analyser and Dust Accumulator, is designed to capture dust particles in the coma of Comet 67P/Churyumov–Gerasimenko as Rosetta flies around it. The characteristic properties of the dust grains can be used to infer the history of the material being ejected from comet.

The latest study focuses on the dust particles collected between 1 August 2014 and 14 January 2015. The GIADA team find that the dust particles impacting on their detectors can be separated into two families: ‘compact’ particles with sizes in the range 0.03–1 mm, and somewhat larger ‘fluffy aggregates’ with sizes between 0.2 and 2.5 mm.

The individual compact particles have a bulk density of 800–3000 kg/m3, consistent with a variety of minerals or mixtures of minerals. On the other hand, the larger aggregates are made up of many sub-micron sized grains with void spaces in between, resulting in fluffy, highly porous structures that are mostly empty space. These aggregates are associated with the fluffy particles seen by Rosetta’s COSIMA instrument.

Indeed, the fluffy particles have effective densities of less than 1 kg/m3, literally lighter than air (at sea-level), and which Marco likens to the equivalent density of a dandelion seed head in a vacuum.

During the study period, a total of 193 compact particles were detected, impacting the GIADA detectors at an average speed of 3 m/s. A total of 853 detections of fluffy particles were made, the great majority associated with 45 dust ‘showers’. Roughly 2–3 of these showers were seen by GIADA each week, lasting anywhere between 0.1 to 30 seconds. A typical shower might be broken up into a handful of sub-showers as well, lasting from 10 milliseconds up to a second. 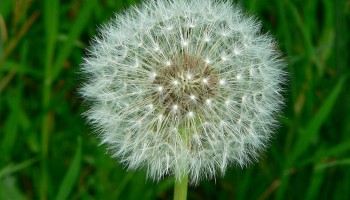 The fluffy particles are likened to the equivalent density of a dandelion seed head in a vacuum. Image: Greg Hume – Own work. Licensed under CC BY-SA 3.0 via Wikimedia Commons

While more fluffy particles were detected than compact ones, their size distribution reveals that they only contribute a minor fraction of the total mass of dust being lost by the comet.

Also, importantly, most of the fluffy particles were detected hitting GIADA at less than 1 m/s. Because the escape speed of both types of dust particles from the surface of Comet 67P/C-G should be the same, the fluffy aggregates must be decelerated somehow. The scientists believe that this is happening due to Rosetta itself.

Marco explains: “Both the spacecraft and the dust particles are negatively charged, so there is a repulsive force between them. The amount of deceleration experienced by any particle is related to its charge and mass, with the maximum amount of charge held by the dust particle determined by its geometry.

“For example, the fluffy aggregates can collect about 20 times more charge than compact particles of equivalent radius. These fluffy particles will be slowed down more, and could even be stopped or repelled by the spacecraft if their charge-to-mass ratio is large enough. 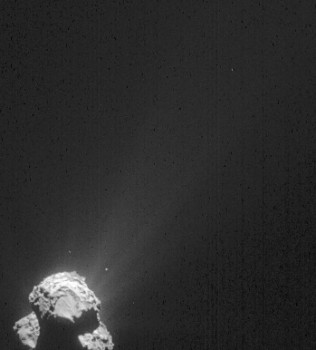 This image was taken by Rosetta’s NAVCAM at about 385 km from the comet centre and shows the comet’s dust streaming out into space. The image measures 34 km across. Credits: ESA/Rosetta/NAVCAM – CC BY-SA IGO 3.0

“In addition, the more charge collected by a fluffy dust particle, the larger the internal disruptive forces are, and so the greater chance it will become unstable closer to the spacecraft, leading to its fragmentation before arriving at GIADA.”

Thus, the denser compact particles are not greatly impacted by this effect, while the fluffy aggregates are slowed down and disrupted creating the showers and sub-showers seen by GIADA. The smaller fragments arrive at the spacecraft at speeds as low as a few centimetres per second and may further collapse into rubble piles, as seen in the COSIMA images.

Density is a critical parameter differentiating these two families of particles, and it is likely that they have quite different histories. By comparing the GIADA results with laboratory measurements, the scientists believe that the denser compact grains represent materials that underwent significant processing in the environment surrounding the new born Sun, before being accreted by Comet 67P/C-G as it formed in the outer Solar System.

The low-density fluffy particles, however, are thought to be primitive material linked to interstellar dust, material that pre-dates the birth of the Sun and escaped any processing before being accreted by the comet during its formation.

More detailed information can be found in the paper, which can be accessed here.