Why do we train with ATV?

The ESA-developed Automated Transfer Vehicle, or ATV, is the flagship of the ISS cargo spacecraft program. No doubt about that: even though I’m just a rookie, I’ve heard it so many times from experienced astronauts and cosmonauts to quickly become convinced.

About as big as a London two-decker, the ATV has more than sheer size to amaze us. It’s the only cargo vehicle that stays docked to the Station for 6 months, thus greatly increasing its inhabitable volume: for the long duration astros and cosmos, a welcome luxury. 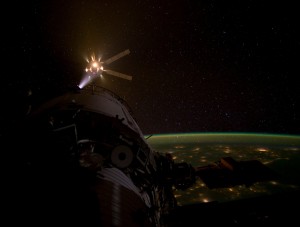 It transports all kinds of dry and wet cargo, air, other gases, fuel (and a guitar that was specially modified so I could take it on orbit, although its modification doesn’t include a magic switch to make me play it well).

Thanks to its powerful engines, and to the fact that it docks on the main axis of the Station, it can perform reboosts, to help stabilize the ISS on its orbit, or DAMs, the Debris Avoidance Maneuvers that every now and then are implemented to make absolutely sure no dangerous “space junk” hits the orbiting lab.

On top of all this, after it is launched, it travels for millions of kilometres to finally dock, completely automatically – thanks to European driven technology – with a demonstrated precision of about a centimetre. As a pilot, and as an astronaut training to perform manually the same docking in a Soyuz spacecraft, I’m totally impressed. 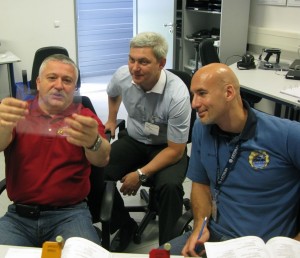 So the question I would ask, if I were on the other side of this blog, is: “if it does everything automatically, what kind of training is needed, if any?” Strange as it may sound, there is the need for quite a bit of training: let’s see why.

When I say that the ATV does everything automatically, I don’t mean independently: during all phases of flight – launch, separation, autonomous flight, docking, docked flight, undocking – a Team of engineers, based in Toulouse at the ATV Control Center (ATV-CC), studies all the telemetry data, and is capable of adjusting and controlling all aspects of the flight. However, in the very last parts of the rejoin and docking phases, when ATV is already really close to the Station, the computer on board is responsible for everything: alignment, speed, attitude, engine control. ATV is even in charge of checking that everything is going well: should it detect a problem, its own internal computers would react to prevent any safety issues. The engineers still would have the capability to send commands just in case something still doesn’t work, but all in all ATV is now working independently. 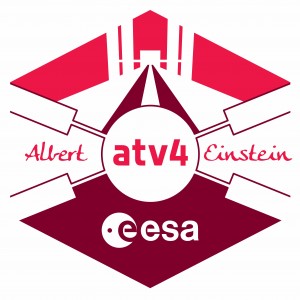 Through all this, it looks as though the crew on board the Station has very little to do, other than wait for the goodies to arrive. In reality, from their vantage point, the crew continuously monitors the spacecraft through the Station’s video cameras, and are also capable of sending commands to ATV: Hold (that is, stop where you are), Retreat (go back to the last waypoint) or Abort (go away as fast as you can!). Once ATV is within 11m, the crew has full responsibility to monitor and take action – the ground commands would not arrive in time to be effective, so the crew on the ISS is in charge. We train to correctly read the telemetry parameters and to quickly react should anything go awry. Things can get really exciting, because a lot can happen in a very short time: the corridor ATV has to maintain is very small, and the parameters to read – and react to – are many. That’s why it takes two people to perform this delicate task, with very distinct responsibilities, and why it takes quite a bit of Crew Resource Management (CRM) to perform well.

Once ATV docks, it needs to be prepared for the docked phase of flight – this require making sure that there are no leaks, that the atmosphere is not contaminated, and that all the systems are operational. All this also requires training. 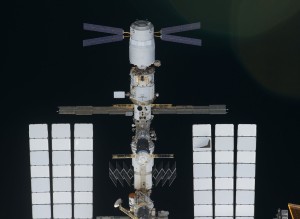 After that, nominal activities like dry cargo transfer, water transfer, gas ops, all require training to cover how it’s done correctly and safely, taking into consideration the differences between ATV, the other modules and the other cargo ships. Inevitably, a very important part of the training includes what to do in case of emergency – fire or depressurization – all the way to a very quick undock. Undocking also requires training, since there’s some interaction between the crew on board and COL-CC, and the procedures need to be followed correctly and quickly – two words that seldom go well together!

All the training is done in Cologne, where our ESA instructors do their best to teach us all the peculiarities of ATV – then we have a final exam in Star City, since ATV docks to the Russian segment of the ISS.

When I started training on the ATV, I couldn’t help but think “This is going to be a piece of cake!” But that cake turned sour very quickly, when trying to see everything at once and remember what to do and how, I managed time after time to send the wrong command, at the wrong time, or failed to do so, sweat pouring from my over concentrated brow. That’s when I was convinced that ATV training was necessary.