Posted on January 30, 2012 by Samantha Cristoforetti

On January 18th Thomas and I participated in a two-day survival training program that is mandatory for all Soyuz crewmembers and is meant to provide astronauts and cosmonauts the skills and confidence necessary to survive in cold weather. While the rescue teams typically arrive on the Soyuz landing site even before the capsule has made ground contact in case of a planned descent, an unplanned emergency reentry is a possibility at any time during autonomous flight or while docked at ISS. In the worst case scenario, even during initial ascent as a consequence of rocket failure.

Here is my attempt at sharing with you our experience in the woods surrounding Star City.

Getting the fire started (Credit: GCTC)

I could watch forever the hypnotic dancing of the flames. Still, my one hour night watch is over: it’s time to wake up my crew mate and try to get some sleep. As Thomas stretches his limbs, rigid from the cold and the frugal mattress of leaves and branches , I make a quick radio call reporting that our crew is doing well. Yesterday, during our first night of survival, the procedure was different: stranded and with no contact to rescue teams, we would make three MAYDAY calls in the blind at every full hour, in intervals of 2 minutes. Unnecessary procedure now, since we have been located!

Last night we made simulated contact with a rescue helicopter. On their request, we lit our signaling fire and a night flare so that they could pinpoint our position. As expected, we were told that we would be rescued only the following morning and so here we are, in our tepee, in what is now mainly an exercise in patience and cold endurance. 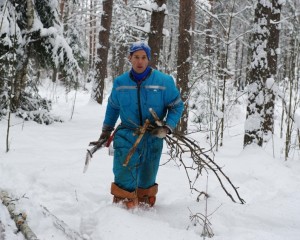 Truth to be told,we really can’t complain. It’s -15°C tonight with hardly any wind; snow on the ground is knee-high. I rejoice at our good luck when I think of the many accounts of crews going through  their training in chest-high snow and -30°C. Even so, it seemed like a daunting task ahead when, two days ago, we were helped into the Sokol flight suits and told to climb into an old Soyuz descent module that was laying on its side in the survival area. Awaiting us inside, packed in the little volume available, the standard Soyuz survival kit and cold-weather clothing. Awaiting us outside, the parachute canopy and ropes,three seat liners that we would normally remove from the seats and thigh-high water-proof footwear that we would normally cut out from the Forel water survival suit.

Thomas has entered first. Finding him oddly perched above the control panel, I hunker down in a corner, trying to make space for our commander, Sergey, to enter as well and close the hatch behind him. A quick radio call, and the training begins.

Keeping dry, pacing ourselves so as not to sweat, has been touted as the number one advice to prevent hypothermia and is a brightly present resolution in my mind. This notwithstanding, after a few minutes we are all in a sweat.  In the confined volume, we search and unwrap the components of our winter survival clothing, each marked with our name: the jumper suit, the sweater, the light jacket, the thick overall, the heavy jacket. And then  gloves, hat, footwear. As I help Sergey out of the Sokol and try to pass him the appropriate clothing elements, I can’t help to be grateful that none of us is particularly big!

By the time we make our way into the woods, after having gathered the survival gear and the parachute in the seat liners, we have about 4 hours of sunlight left. 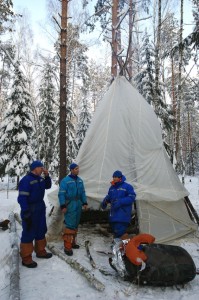 We don’t have to worry about food, as there is sufficient supply for at least three days, but we’ll have to work quickly to have our shelter, our signalling fire and our firewood ready by nightfall. Sergey spots a good place for our camp: two straight trees at about two meter distance for our lean-to shelter, plenty of space in front to build our tepee the next day on the area that will be heated by tonight’s fire, a clearing about 100 meters away for our signalling fire.

With the resolute, but endearingly gracious leadership style that Thomas and I will quickly come to appreciate, Sergey distributes the tasks and gets the work going. A former Blackjack pilot in the Russian Air Force, our commander has great outdoor skills and a natural instinct for taking care of everybody’s needs. Another great fortune, and one that will be pivotal in creating the smooth and warm atmosphere among ourselves that will remain as a cherished memory.

Sharing one knife and one machete from the survival gear, we use medium size branches and parachute rope to build the framework of our lean-to shelter. We then cover both the floor and the roof with a sizeable amount of branches and leaves  and wrap everything in parachute material and reflective survival blanket. It’s not a palace, but it will do, and I will actually get a few hours of sleep tonight, in stints of 20 to 30 minutes.

No comparison, of course, with our shelter for the second night. With the entire day at our disposal, the instruction is to build a tepee. After constructing the conical framework with 6 long tree trunks, we wrap the parachute around it: one internal lower layer, about chest high, and one external upper layer, which leaves an opening at the top. By inserting 30cm long sticks between the two layers, we create a gap for fresh air to flow in, while smoke from the fire is evacuated from the top opening. 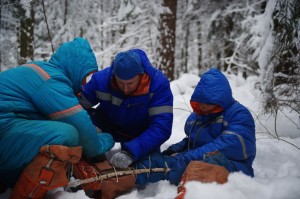 So here I am, passing the radio to Thomas and trying to go to sleep. In a few hours we will be contacted by the rescue helicopter and be given an azimuth to follow to the recovery area. We know from the briefing that one of us will have to simulate a broken limb, so we will have poles ready to make an improvised stretcher from a seat liner.

Once it is all over, I fancy that we will light a signalling flare in celebration.  And one last thought as I slip into a light sleep: let that post-training sauna tomorrow be nice and hot!

Celebrating end of training with a flare (Credit: GCTC)