The first entry of a blog, although not impressive or exceptional in itself, is still a first. It somehow sets the tone, and even if we’ve all always been told not to judge on a first impression, I know I can’t shake off a bad initial feeling, and respectively, that a good first impression has always something beneficial. Then, after a variable adjustment period, this first impression will slowly be replaced by who you really are.

So here I am, jabbering on about first impressions, whereas I (we) have so much to say. But one thing at a time: first of all let me thank you, whoever you might be, for coming here, going through the hassle of reading my (way too long) sentences and showing some interest for what we are doing or trying to do.

I don’t really know yet who I am writing for/to right now, but let me make an assumption to start with: the space enthusiasts that would initially, even by chance, wander into this blog, already know a great deal on the technical aspects of being an astronaut and training for a spaceflight. I’ve met so many that knew more than me on aerospace engineering or cosmology, or that could tell hundreds of space anecdotes that I had never heard about, that I’ve stopped trying to teach them anything: in the times of the internet, they already know. What they might not know, however, and what they might be looking for, is the inside day-to-day reality of being an astronaut: the constant traveling, the people you meet, the incredible experiences you live, what is already exceptional way before launch day, what is also difficult and sometimes painful but is still part of the job, the small stories, the jokes, the camaraderie, the up and downs, etc. Therefore -but it’s only my assumption and since our collective ambition is to all contribute to this blog, it might very well not be the case for everyone taking the pen- I’ll try to avoid too much technicality and focus on what’s usually not told in press conferences or PowerPoint presentations (but hey, don’t expect big secrets… those ones we keep for ourselves). It might also just be my character, I don’t know. What I know is that in a group like ours, you find as many different (strong) personalities and point of views than you have individuals, so expect the unexpected…

This being said, it still falls to me to set the scene right for the next one to follow, so as in every would-be good piece of literature, I still have to describe the set, and introduce the characters. 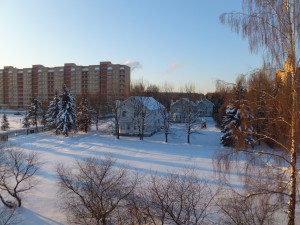 The scenery is very well known by many of the human spaceflight connoisseurs: it’s called Star City, near Moscow, and has been the training centre and residential place of Russian cosmonauts for 50 years now. As I am writing this from my room in the Prophylactorium (which serves as a rehabilitation centre after long duration spaceflights, and as a hotel with also some office space for NASA, ESA and JAXA personnel), I have a wonderful view of some of the Russian training buildings and residential blocks, and of the NASA cottages who accommodate US astronauts when they train here and seem to have been copied-pasted straight from the US. If I stretch my neck from the balcony and look left, I get a postcard view of the brand new wooden Orthodox church of Star City, and to the right, I can see the frozen lake and wooden terrain around. The weather is gorgeous today, in spite of the minus fifteen Celsius, and everything is covered in a pure white snow, knee high everywhere it was not cleared, that reflects the sunlight and damps all the sounds. I might be waxing lyrical  here even so slightly, but that’s really what it looks like; it hasn’t always been like this as they wen though difficult times in the 90s here, and I was also a little bit less romantic last week during the forest survival training, when I didn’t have the central heating of my room to give the scenery some added poetry from behind the window -but that’s probably worth another entry by itself. Anyway, Star City is a real small Russian town -school, police and all- with a cosmonaut centre within called GCTC (Gagarin Cosmonauts Training Centre), and we spend our time here between GCTC’s training premises, the ESA office, the gym and the pool, our NASA colleagues’ cottages and our rooms.

The rooms are at the same floor, it’s very much like being back in boarding school with some extra space and freedom, and when we arrived from Cologne with Andreas on Sunday night a week ago, we were met by Luca, our favorite Italian test pilot, freshly arrived from the US, whom we hadn’t seen in ages. Andy and myself are living in Cologne, Germany, where the European Astronaut Centre is located, but Luca has been assigned to a 2013 long duration flight on the ISS, so he is now traveling back and forth between Houston, where he now lives and trains on the US space assets, and GCTC where he has a lot of classes as well on the ISS, the Russian Soyuz that will be our ride into space, etc. 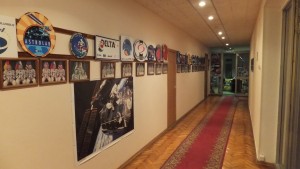 The ESA floor in the Prophylactorium

We hadn’t seen each other in a while, because even though our class is the most united group of people you could find, we are usually all over the world due to training or other activities, so we very seldom have the opportunity to meet together like in the (already) good old times. We were still catching up in our floor kitchen, where we will have meals and debates and laughs during the next weeks of training, when Samantha came in from the airport and joined the reunion. As a reserve astronaut, being trained to step in shall anything happen to a crew member before he launches, she also gets to travel a lot and has a schedule of her own, but this time she’s in Star City at the same time as us. The discussion continued well into the night, even after finishing up the welcome chocolates that Yuri and Anna, our ESA staff here, kindly left on the table for our group as a Christmas/new year present. We were joined after some days by Tim, whom I’m training with on the Orlan spacesuit now, and our group is now complete but for Alex, who is training in Houston for a spaceflight in 2014, and whose sense of humor we are missing a lot. So just by good fortune, our coincident training schedules reunited us here in Star City, and that seemed a good enough (or unlikely enough) reason to start our own blog.

I’ve already written too much to start describing in details the group life we are living here, at our base in Cologne or elsewhere, the dynamics, the personalities, but we’ve already been through so much during Basic training and since we’ve been recruited, good and bad, that the bonds couldn’t be stronger and are here to stay. I can’t wait to play the guitar with Luca, have scientific debates with Andy over breakfast, drink espresso and speak French with Samantha at the Cosmonaut’s canteen, go run laps with Tim in the cold around the lake…and that we start again playing practical jokes on each other (I am working on a top 10 of those, and trust me there are many to chose from, including some self-inflicted ones, but that’s probably part of the secrets we will keep…). Time is missing to tell all about what an incredible experience going through basic training, the first phase of astronaut education, with those exceptional people was, and time flies so fast that everyday brings new stories that push back the old ones. Anyway, we now have a blog, and in the future we’ll try to capture those moments and bring them to you, hopefully in a shorter and more condensed format than what my literary French background requires… we may also sometimes shift the focus more to training, and sometimes just to whatever we feel like saying… I leave it to the next contributors, but isn’t diversity also what makes the whole astronaut experience so exceptional after all?

To finish with, if you have questions (or even if you simply made it alive to here :-)), feel free to leave a comment!