“At 600km above planet earth the temperature fluctuates between +258 and -148 degrees Fahrenheit. There is nothing to carry sound – no air pressure, no oxygen. Life in space is impossible…” 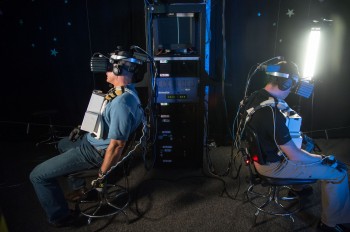 I am reminded of the opening lines to the BAFTA award winning and Oscar nominated movie Gravity as I tumble through space. Current situation is not good: detached from structure, untethered, tumbling uncontrollably and disorientated. Moving rapidly away from the safe haven of the International Space Station – I am suddenly extremely thankful that this is only a simulation. In fact, this is not just any ordinary simulator. I am training at a cutting edge facility called the Virtual Reality Laboratory at the Johnson Space Centre in Houston. Here astronauts train for a situation which is arguably their worst nightmare.

Unlike Sandra Bullock’s predicament in the movie, left to tumble at the mercy of the laws of Physics until rescued by George Clooney, we have one last option available. The US spacesuit that is used for conducting spacewalks is equipped with a ‘jetpack’ called SAFER (Simplified Aid for EVA Rescue, where EVA is an Extra Vehicular Activity, more commonly known as spacewalk). The SAFER discharges high pressure nitrogen gas to 24 small thrusters located around the spacesuit’s backpack. These thrusters control the spacesuit in 6 axes: rotation in pitch, roll and yaw and translation forwards/backwards, sideways and up/down. The astronauts control the thrusters using a hand controller – and if you think it sounds like something from an early James Bond movie then you wouldn’t be far wrong. 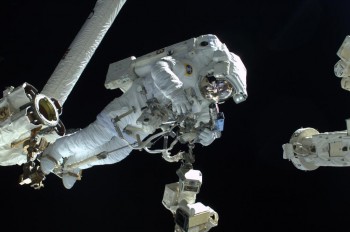 ESA astronaut Luca Parmitano on his spacewalk in 2013. SAFER is worn on the back (here the number ‘3’ is printed on the unit). Credit: ESA/NASA

Thankfully the chances of finding ourselves in a situation where we need to deploy the SAFER are slim. During a spacewalk, astronauts are protected from becoming detached from structure by a retractable safety tether, anchored to the space station at one end and attached to the spacesuit at the other. However, this thin steel wire is a double edged sword and astronauts must remain constantly vigilant so as not to get tangled up in their (or their buddy’s) tether lines. In addition to safety tethers, there is a mantra drilled in to all rookie astronauts – “you stop, you drop” meaning that as soon as you stop moving from A to B you ‘drop’ another tether, a short strap securing you to the nearest handrail. These tether precautions mean that the SAFER really is the last level of defence against drifting off into the eternal vastness of space, so if it is ever deployed then your life truly depends on it. I am acutely aware of this fact as I attempt to manoeuvre myself back to the space station. 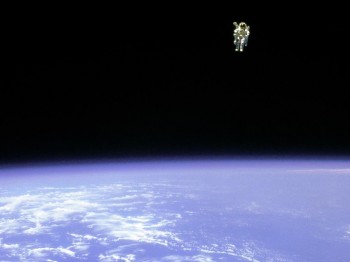 Under other circumstances I am certain that flying around in space with a thruster pack must rank up there as one of the most exhilarating feelings imaginable. Only a handful of astronauts have ever experienced this, during three tests of a Manned Manoeuvrability Unit in 1984 and when the SAFER was initially flight tested in 1994. I think one of the most inspirational photographs taken from space was during the first of these untethered spacewalks, of NASA astronaut Bruce McCandless. This image, taken from the Shuttle, shows McCandless floating against the empty blackness of space above a stunning blue Earth – the feelings of isolation and exposure must have been immense.

However, I have no time to dwell on these thoughts – my emergency rescue scenario is extremely challenging and the small quantity of nitrogen available for propulsion means that you only get one shot – no mistakes. Thankfully the SAFER is equipped with an automatic attitude hold. What this does is stop the nauseating tumbling motion once the system is initiated. If you are lucky, when the tumbling ceases you will be able to see part of the space station or maybe earth, as a reference point. Not so lucky and precious nitrogen has to be expended in searching for the space station.

Having successfully located the space station, the nitrogen remaining is already likely to be down to around 50-60% and although the tumbling motion will have stopped, you are still drifting away from structure. As you get further from the space station then other factors such as orbital dynamics complicate matters. In a nutshell, objects in higher orbits travel more slowly and those in lower orbits travel faster. This explains why our TV satellites are way out at nearly 36,000 kilometers, where they orbit the Earth only once every 24 hours, matching an Earth day and therefore remaining ‘geostationary’. In contrast, the space station at only 350 kilometers altitude travels at a balmy 17,500 miles per hour in order to remain in orbit and circles the Earth every hour and a half. These orbital effects become apparent even at relatively short distances and it is unnerving to watch the space station slipping further away as you drift into a different orbit. So time is of the essence and the most important skill astronauts must learn is being able to rapidly and accurately orientate themselves towards the space station and thrust back to the point at which they came off structure. 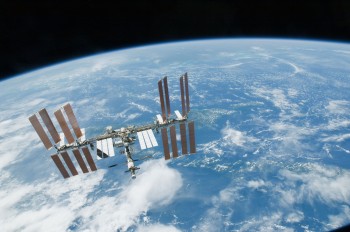 My first two self-rescue attempts went well, which was a relief in more ways than one since my instructors had commented that helicopter pilots are usually pretty good at this sort of thing – no pressure then! For my third attempt the stakes were raised and I was ejected into space at a faster rate and from a more remote part of the space station where a successful recovery would be more challenging. Worse still, my SAFER took three attempts to initialise, by which time the space station was beginning to look awfully far away. As I recovered the situation and closed with the space station, a quick check of nitrogen showed a worrying 10% remaining. My closure rate was too fast, the nearest handrail available to me was off to the right and I was not convinced I was going to make it. With an arm outstretched I decide to go in hard and fast – forget the braking and use the remaining propellant to get to the handrail. It worked, but only just and I could hear my instructors in the background chuckling at their console. It had been a close call but that’s exactly what these training sessions are for. Just to cement the lessons learned I was immediately thrown back off from the same point only this time at night…I certainly earned my coffee that morning. 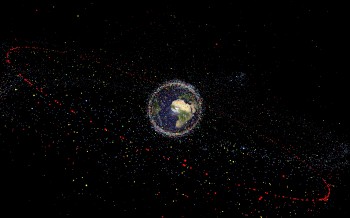 The movie ‘Gravity’ is based on a scenario whereby a Russian satellite incurs a missile strike, causing a cascading collision cloud of space debris. This is not such a far-fetched concept and is in fact known as the Kessler Syndrome. Space debris is a big deal. There are currently more than 600,000 pieces of debris larger than 1cm orbiting the Earth. To put this into perspective, an object of that size travelling at over ten times the speed of a bullet could easily punch its way through the space station and cause a rapid depressurisation. In 2009 there was an accidental collision between an Iridium communication satellite and an out of service Russian military satellite. This alone produced thousands of large fragments of debris which even years later caused the crew of the space station to take refuge in their Soyuz as a precaution whilst a fragment passed by.

Some 19,000 pieces of space debris are continuously tracked by ground radars. In Europe, this is the job of the European Space Agency Operation Centre in Darmstadt, Germany. On average the Space Station is required to perform a debris avoidance manoeuvre about once a year when an object threatens to get too close. It is only as a last resort, if an object is spotted too late, that the crew are required to shelter in their Soyuz until the danger has passed. And if you think it is only the crew of the space station who are threatened by objects in space, don’t forget that we are all hurtling through a very cluttered solar system on spaceship Earth. Only last year a 20m wide asteroid slipped through the net, causing an unforeseen air burst over Chelyabinsk in Russia, exploding with 20-30 times the energy of the atomic bomb detonated at Hiroshima. Earth has close calls from asteroids more than you might think – and we have yet to develop our own ‘debris avoidance manoeuvre’. But I digress, this is the stuff of Armageddon…not Gravity!