Living with a comet: a VIRTIS team perspective

Rosetta’s VIRTIS instrument (Visible and Infrared Thermal Imaging Spectrometer) has collected over 200 million spectra concerning the nature of Comet 67P/C-G’s nucleus and the gases in the coma. Principal Investigator Fabrizio Capaccioni gives the behind the scenes story of two top VIRTIS science discoveries, that is, after an initial rough start… 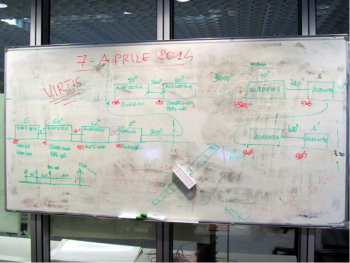 A rather critical time for the VIRTIS instrument as a whole was when we performed the commissioning activities in the night of 7 April 2014. After 2.5 years of hibernation we were quite tense and also a bit rusty in the instrument handling; in fact, we ended up uploading the wrong telecommand sequences! The onboard software was much smarter then we were (after all, it had relaxed for 2.5 years) and gave us a lesson, sending back a flurry of unpleasant comments directed to us and to some of our relatives (including the deceased ones…)! We did not expect to have made mistakes, so we got really scared when the instrument responded as it did. The worst thoughts came to our minds: was it a broken sensor? A faulty component? All those years of expectations and planning, for what?

We had to quickly verify the received housekeeping data and the uploaded sequences as we didn’t have much time: we had an interactive session of only few hours and we had many checks to do. 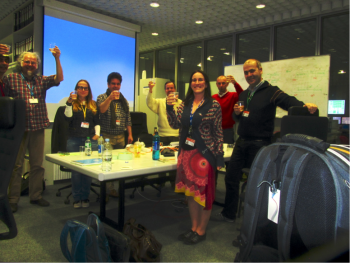 An accurate verification of the parts in small print of the user manual got us back on our feet. We indeed had reversed the order of some telecommanding calls, and we had to go back to the sequences uploaded in the “Cruise Phase” and redesign the initialisation procedure in few minutes, hoping not to have made any further mistakes. Thanks to all the people involved everything went well and the onboard software was finally satisfied. We remained on good terms with the onboard software ever since.

And it was a good thing too, as VIRTIS was set to make a lot of discoveries at Comet 67P/Churyumov-Gerasimenko, including the first identification of widespread presence of organic material on the surface of a cometary nucleus…but it wasn’t plain sailing, as Fabrizio reveals.

In the early phase of the mission (July-September 2014) the infrared region between 1 and 5 microns was our favourite spectral range because it was where we were expecting to identify the major compounds: water ice, carbon dioxide, methanol, and other carbon-bearing molecules. The visible channel (covering the spectral range through the visible from 0.250 to 1.0 microns), after a quick glance at its featureless spectrum, was left in the background. However, several instrumental artefacts in the infrared range where giving us a hard time in trying to interpret the observed features: was it noise? Background signal? Calibration residuals? A broad feature at 3.2 um was observed, but we couldn’t be sure of its real nature without independent confirmation.

In the early September, Priscilla Cerroni (a VIRTIS Co-Investigator) was studying the spectra of some carbon-bearing materials used in the past to compare with primitive meteorites (carbonaceous chondrites). These materials, known as “tar” or “kerogen”, contain a large amount of carbon in the form of hydrocarbon aromatic rings as well as short aliphatic bridges and side chains. The spectra Priscilla was analysing, although not showing those distinctive spectral features known as absorption bands representing (when present) the unmistakable signature of some specific molecules or minerals, were still displaying some peculiar shape in the short wavelength region of the spectrum (below 1 micron). In fact, in the neglected VIRTIS visible range the cometary spectrum showed a downturn at about 1.0 micron, which almost exactly matched the one observed in the “tar” laboratory spectra. These analyses gave as the right push to interpret the 3.2um feature as due to the presence of a large fraction of carbon-bearing molecules indicating an organic chemistry on the nucleus of 67P.

A few weeks later, Andrea Raponi (a post-doctoral researcher working at IAPS-INAF), was able to generate an artefacts matrix which effectively removed all the unwanted signal, clearly showing that the 3.2um band was effectively compatible with the presence (as shown recently by Eric Quirico in his Icarus paper) of a semi-volatile component which could be assimilated to carboxylic acids.

This was the first identification of widespread presence of organic material on the surface of a cometary nucleus and this has very important consequences on the understanding of the formation and early evolution of the Solar System. 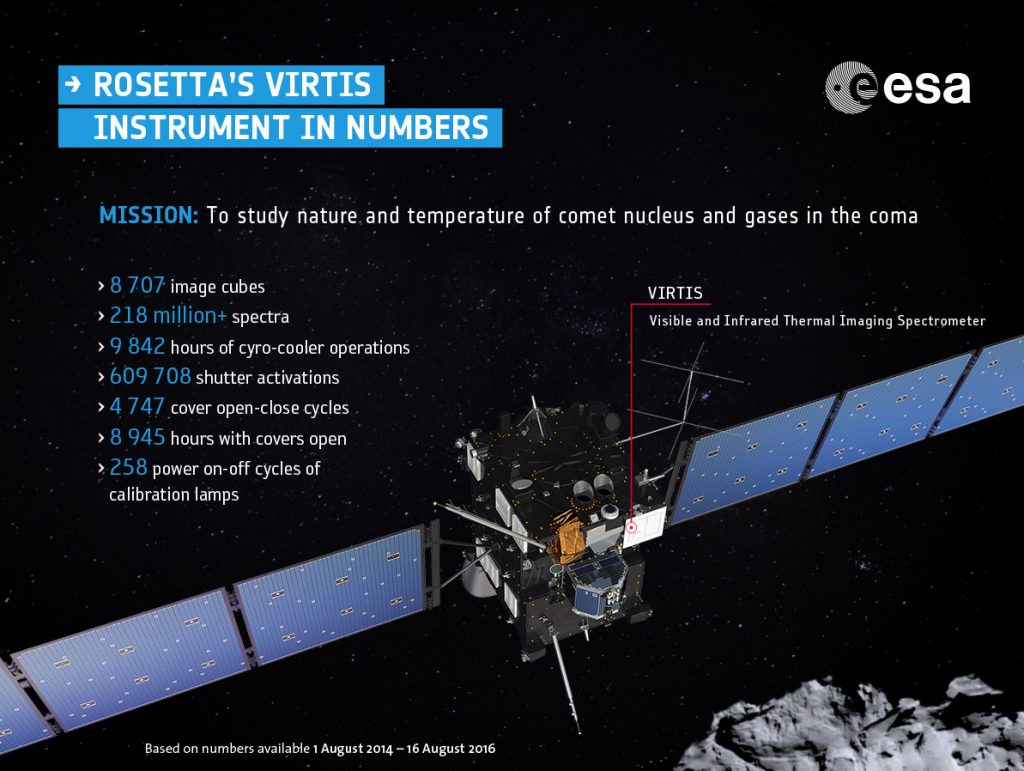 The story behind the discovery of the comet’s water cycle was also not straightforward….

We discovered for the first time the presence of abundant organic materials on the surface of the nucleus of a comet, but from where was the abundant water observed by MIRO and ROSINA coming? We had just a hint that in some limited regions water ice could be present mixed in very small quantities with the ubiquitous dark materials. Could it be that all the water ice was kept hidden below the surface?

In late September 2014, while passing along the corridor in front of the office of Maria Cristina De Sanctis (by the way, in those early months almost all the people along that corridor were, and still are, involved in the analysis of the 67P nucleus spectra and most of the time the monitors of their PCs were showing either spectra or false-colour images of the nucleus as obtained by VIRTIS), she told me: “Fabrizio come here a moment, I have something interesting to show you”. Indeed, for the first time, she was able to identify the unmistakable spectral signatures of water ice: these are absorption bands located at 1.05, 1.2, 1.5, 2.0, and 3.0 micron. The most intense of these bands is the 3.0 micron band, which unfortunately is almost superimposed on the 3.2um organic band we had discovered previously. The depth and intensity of an absorption band is proportional to the amount of material producing it, so the combination of paucity of water ice and superposition with another more intense compound was hiding the presence of water ice at the surface. But those were not the only explanations for our failure to identifying water ice earlier: we did not observe it before because not only did we have to observe it in the right place, but also at the right time of day! 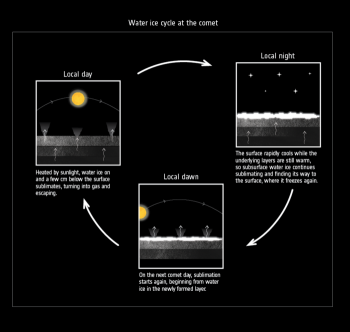 The water-ice cycle of a comet, as inferred by VIRTIS data. Click for full caption and credit.

Cristina showed us several spectra in which the depth of the absorption band (and consequently the amount of water ice present) was decreasing, and guess what? The water ice band decreased as we were moving away from the shadowed regions, creating a direct correlation between surface temperature and water ice abundance: colder areas had more water ice than warmer ones. One could say: “is this a discovery? Where is it more probable to find ice on Earth: at the South Pole or in the Sahara?” This is very true, but a comet is not the Earth; the cometary “atmosphere” is too tenuous to allow recondensation from the coma. We needed a replenishment mechanism to allow ice to form at the surface in the night from an internal source rather than an external one. During a group discussion we came up with the explanation and with the conditions for it to work: the presence of a layered and very insulating surface. In other words, we needed an exterior layer of few millimetres capable of screening the interior from the sudden temperature changes introduced by the shadowing effects of the two lobes and by the more normal day-night variations. On the nucleus there is no atmosphere and the surface directly interacts radiatively with the empty space. An insulating layer when exposed to night conditions cools down very rapidly to below 100K (-173ºC) while the interior is still warm from the previous solar illumination. Ice sublimates from the interior and reaches the surface, which is by now a cold trap, and causes the recondensation of water vapour.

After much discussion with leading science journals, we were eventually able to publish the result, in Nature, nearly a year after the initial discovery. 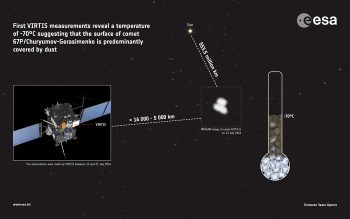 The first temperature measurements by VIRTIS were made on the approach to the comet in July 2014. Click for full caption & credit.

And finally… an update on the comet’s surface temperature
Over the course of the mission VIRTIS measured the rise and fall of the comet’s surface temperature as the comet orbited the Sun. After arriving in August 2014, it was found to range between –93ºC and –43ºC, but by August 2015, when the comet was closest to the Sun, peak measurements reached +54ºC (note: this is not necessarily the highest value on the comet, but certainly the highest recorded by VIRTIS in one particular location in the comet’s southern hemisphere). A year later, they have fallen again to similar values as first measured, as the comet moved away from the Sun again and back towards the outer Solar System.

This and more achieved by an instrument that requires just 60W to operate – as much as a standard light bulb!

About VIRTIS
The Visible, InfraRed and Thermal Imaging Spectrometer VIRTIS was built by a consortium of Italy, France and Germany, under the scientific responsibility of IAPS, Istituto di Astrofisica e Planetologia Spaziali of INAF, Rome (IT), which lead also the scientific operations. The VIRTIS instrument development for ESA has been funded and managed by ASI, with contributions from Observatoire de Meudon financed by CNES and from DLR. The VIRTIS instrument industrial prime contractor was former Officine Galileo, now Leonardo (Finmeccanica Group) in Campi Bisenzio, Florence, IT.