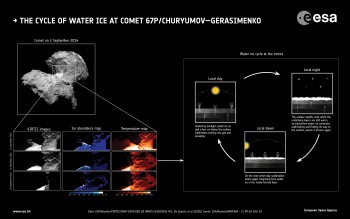 Last week we reported on the daily water-ice cycle of Comet 67P/Churyumov-Gerasimenko that was observed in a specific region of the comet’s neck by Rosetta’s VIRTIS instrument, in September 2014.

Yesterday at the European Planetary Science Congress, animations were shown covering the period 1 August 2014 to 10 February 2015 for two different areas of the nucleus, showing the behaviour of the water-ice over a much longer period.

“We are now able to show that this cycle is common in several regions of the nucleus, depending on the illumination conditions, and hence further demonstrate that the proposed cycle is a general mechanism of water transport from depth to the surface acting on comets,” said Fabrizio Capaccioni, VIRTIS principal investigator. Fabrizio described the results in a press briefing held at EPSC yesterday afternoon.

The two movies are based on data acquired between 1 August 2014, when the comet was at a distance of about 542 million km (3.62 AU) from the Sun and 10 February 2015, when the comet was 352 million km (2.35 AU) from the Sun. They show the ice abundance at each time during the comet’s 12.4 hour day for two different regions: one focused on the Imhotep region on the comet’s large lobe, the other around the comet’s neck. For each timestamp, each data point represents the average, for a particular hour of the comet day, over the entire timeframe August-February.

The blue regions indicate the presence of ice in the uppermost surface layer, red shows no ice, and grey indicates portions of the comet that were in shadow.

“We see that in many areas on the comet’s surface the bluer regions have a short lifetime, appearing just after dawn and disappearing a few hours later,” says Fabrizio. “This indicates that in these areas the ice is not stable at the surface but is deposited during the night and sublimates away during the day. This is a clear confirmation of the proposed water-ice cycle.”

The movies also show areas where the bluish colour is persistent throughout the day, which Fabrizio explains as regions of permanent ice – these will be the subject of a future study.

Presentations on the comet’s water-ice cycle will also be given as part of the Rosetta scientific sessions at EPSC later this week, for example: Temporal variability of 67P/Churyumov-Gerasimenko nucleus spectral properties from VIRTIS-M onboard Rosetta by M. Ciarniello et al.