In previous blog posts we’ve heard how VIRTIS is able to map the temperature of the comet’s surface. Now, as Dominique Bockelee-Morvan (CNRS) and Stephane Erard (Observatoire de Paris) report, the VIRTIS science team has started to map gas in the coma. 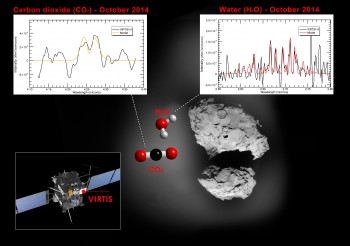 One of the scientific objectives of Rosetta’s Visible and Infrared Thermal Imaging Spectrometer (VIRTIS) is to map the emission of different gases from comet 67P/Churyumov-Gerasimenko, and to study how these change with comet activity.

In early October 2014, activity in the region above the ‘neck’ of the comet became high enough for water (H2O) and carbon dioxide (CO2) to be detected by the instrument’s high spectral resolution channel, VIRTIS-H. (The surface mapping is done with an imaging spectrometer, called VIRTIS-M.)

From these spectra, it is already possible to tell quite a lot about the gas in the coma.

The spectra show infrared molecular bands whose shape depends on the temperature in the coma, whereas the intensity is a function of the number of molecules along the line of sight of VIRTIS.

From these measurements, the relative abundance of carbon dioxide with respect to water is estimated to be about 4%, showing that comet 67P/C-G is not as rich in carbon dioxide as comet 103P/Hartley, also a Jupiter-family comet, for which a relative abundance of about 20% was measured by NASA’s EPOXI mission during its brief fly-by on 4 November 2010.

Ever since July, VIRTIS has been measuring the average temperature of the comet’s surface, finding it to be around –70 °C at the moment. These measurements of the gas in the coma now allow the science team to say something also about the temperature at some distance from the surface.

The current measurements correspond to a height of one kilometre above the surface, where the temperature falls by more than 100 °C to around –183°C. This large drop is expected, and is due to gases accelerating away from the surface and expanding in the coma, leading to cooling by so-called ‘adiabatic expansion’.

The detection of gases in the comet’s coma in this early phase of the mission is important for understanding the ices inside the comet. MIRO and ROSINA have already detected water and carbon dioxide, respectively, and VIRTIS can detect the same molecules, adding robustness to the measurements. But because it can see both with the same instrument, it can determine their relative abundance directly.

This is very important because from the ratios of these two molecules that make up the ice in the comet, scientists can gain vital insights into the make-up and structure of that ice. Ultimately, these new measurements will help meet one of the key goals of the Rosetta mission: what is comet 67P/C-G made of?

As the comet moves towards perihelion in August 2015, its activity will increase, and the team will be looking at how temperatures vary on the surface and in the coma. During this time, VIRTIS will continuously map the distribution of carbon dioxide and water, as well as that of other minor species including carbon monoxide (CO), methanol (CH3OH), methane (CH4), formaldehyde (CH2O), and hydrocarbons such as acetylene (C2H2), and ethane (C2H6).

There are exciting times ahead as the icy treasure chest starts to give up its secrets.