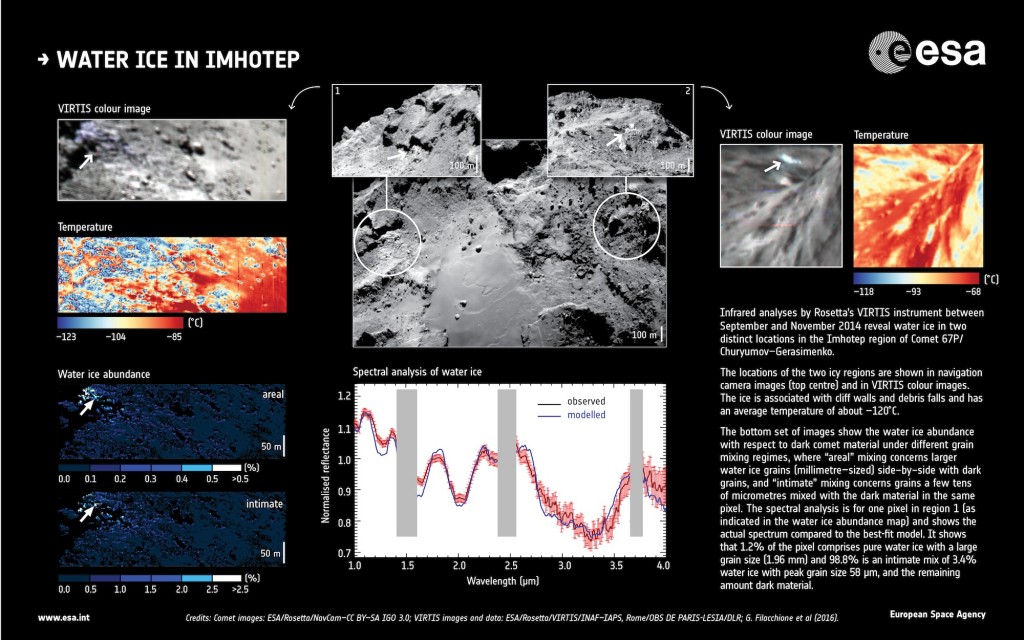 Observations made shortly after Rosetta’s arrival at its target comet in 2014 have provided definitive confirmation of the presence of water ice.

Although water vapour is the main gas seen flowing from comet 67P/Churyumov–Gerasimenko, the great majority of ice is believed to come from under the comet’s crust, and very few examples of exposed water ice have been found on the surface.

However, a detailed analysis by Rosetta’s VIRTIS infrared instrument reveals the composition of the comet’s topmost layer: it is primarily coated in a dark, dry and organic-rich material but with a small amount of water ice mixed in.

In the latest study, which focuses on scans between September and November 2014, the team confirms that two areas several tens of metres across in the Imhotep region that appear as bright patches in visible light, do indeed include a significant amount of water ice. 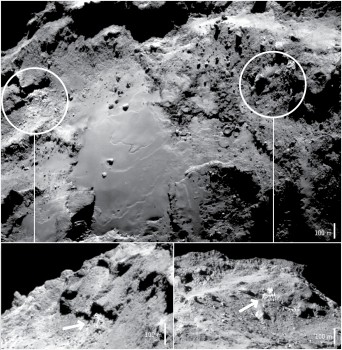 The ice is associated with cliff walls and debris falls, and was at an average temperature of about –120ºC at the time.

In those regions, pure water ice was found to occupy around 5% of each pixel sampling area, with the rest made up of the dark, dry material. The abundance of ice was calculated by comparing Rosetta’s VIRTIS infrared measurements to models that consider how ice grains of different sizes might be mixed together in one pixel.

The data reveal two different populations of grains: one is several tens of micrometres in diameter, while the other is larger, around 2 mm.

These sizes contrast with the very small grains, just a few micrometres in diameter, found in the Hapi region on the ‘neck’ of the comet, as observed by VIRTIS in a different study.

“The various populations of icy grains on the surface of the comet imply different formation mechanisms, and different time scales for their formation,” says Gianrico Filacchione, lead author of the new study, published in the journal Nature.

At Hapi, the very small grains are associated with a thin layer of ‘frost’ that forms as part of the daily ice cycle, a result of fast condensation in this region over each comet rotation of just over 12 hours.

“By contrast, we think that layers of the larger millimetre-sized grains we see in Imhotep have a more complex history. They likely formed slowly over time, and are only occasionally exposed through erosion,” says Gianrico.

Assuming a typical grain size of tens of micrometres for ice grains on the surface, as inferred on other comets as well as Rosetta’s comet, then observations of millimetre-sized grains can be explained by the growth of secondary ice crystals.

One way this can occur is via ‘sintering’, whereby ice grains are compacted together. Another method is ‘sublimation’, in which heat from the Sun penetrates the surface, triggering the evaporation of buried ice. While some of the resulting water vapour may escape from the nucleus, a significant fraction of it recondenses in layers beneath the surface.

This idea is supported by laboratory experiments that simulate the sublimation behaviour of ice buried under dust, heated from above by sunlight.

These tests show that more than 80% of the released water vapour does not make it up through the dust mantle, but rather is redeposited below the surface.

Additional energy for sublimation could also be provided by a transformation in structure of the ice at a molecular level. At the low temperatures observed on comets, amorphous ice can change into crystalline ice, releasing energy as it does so.

“The thin ice-rich layers that we see exposed close to the surface may be a consequence of cometary activity and evolution, implying that global layering did not necessarily occur early in the comet’s formation history.”

“Understanding which features on the comet are left over from its formation and which have been created during its evolution is somewhat challenging, but this is why we are studying a comet up close: to try to discover what processes are important at different stages of a comet’s lifetime,” adds Matt Taylor, ESA’s Rosetta project scientist.

The Rosetta scientists are now analysing data captured later in the mission, as the comet moved closer to the Sun in mid-2015, to see how the amount of ice exposed on the surface evolved as the heating increased.

“Exposed water ice on the nucleus of comet 67P/Churyumov–Gerasimenko,” by G. Filacchione et al is published in the journal Nature.