ESA’s Rosetta spacecraft has revealed a surprisingly large region around its host comet devoid of any magnetic field. 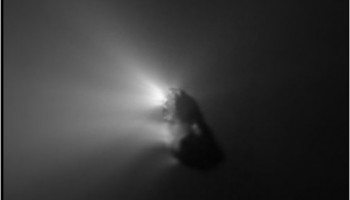 Comet Halley, by ESA’s Giotto, from a distance of about 2000 km. Giotto flew by the comet during the night between 13 and 14 March 1986. Credit: ESA/MPAe Lindau

When ESA’s Giotto flew past Comet Halley three decades ago, it found a vast magnetic-free region extending more than 4000 km from the nucleus. This was the first observation of something that scientists had until then only thought about but had never seen.

Interplanetary space is pervaded by the solar wind, a flow of electrically charged particles streaming from the Sun and carrying its magnetic field across the Solar System. But a comet pouring lots of gas into space obstructs the solar wind.

At the interface between the solar wind and the coma of gas around the active comet, particle collisions as well as sunlight can knock out electrons from the molecules in the coma, which are ionised and picked up by the solar wind. This process slows the solar wind, diverting its flow around the comet and preventing it from directly impacting the nucleus.

Along with the solar wind, its magnetic field is unable to penetrate the environment around the comet, creating a region devoid of magnetic field called a diamagnetic cavity. 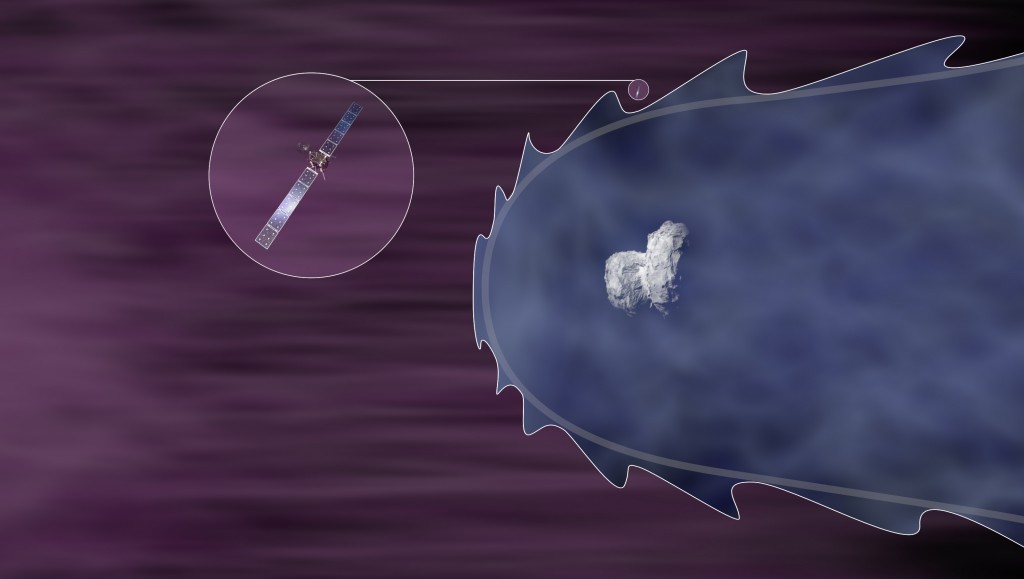 Prior to Rosetta arriving at Comet 67P/Churyumov-Gerasimenko, scientists had hoped to observe such a magnetic field-free region in the environment of this comet. The spacecraft carries a magnetometer as part of the Rosetta Plasma Consortium suite of sensors (RPC-MAG), whose measurements were already used to demonstrate that the comet nucleus is not magnetised.

However, since Rosetta’s comet is much less active than Comet Halley, the scientists predicted that a diamagnetic cavity could form only in the months around perihelion – the closest point to the Sun on the comet’s orbit – but that it would extend only 50–100 km from the nucleus.

During 2015, the increased amounts of dust dragged into space by the outflowing gas became a significant problem for navigation close to the comet. To keep Rosetta safe, trajectories were chosen such that by the end of July 2015, a few weeks before perihelion, it was some 170 km away from the nucleus. As a result, scientists considered that detecting signs of the magnetic field-free bubble would be impossible.

The decrease in magnetic field strength measured by Rosetta’s RPC-MAG instrument at Comet 67P/C-G on 26 July 2015 at a distance of about 170 km from the comet. Credit: ESA/Rosetta/RPC/IGEP/IC

“We had almost given up on Rosetta finding the diamagnetic cavity, so we were astonished when we eventually found it,” says Charlotte Götz of the Institute for Geophysics and extraterrestrial Physics in Braunschweig, Germany.

Charlotte is the lead author of a new study, published in the journal Astronomy and Astrophysics, presenting the detection of a diamagnetic cavity obtained by RPC-MAG on 26 July. The paper describes one of the most spectacular measurements from almost 700 detections of regions with no magnetic field made by Rosetta at the comet since June 2015.

“We were able to detect the cavity, and on many occasions, because it is much bigger and dynamic than we had expected,” adds Charlotte.

To investigate why the magnetic field-free cavity is so much bigger than predicted, Charlotte and her colleagues looked at measurements performed around the same time by other instruments, such as Rosetta’s scientific camera, OSIRIS, and the Rosetta Orbiter Spectrometer for Ion and Neutral Analysis instrument, ROSINA, to verify whether any anomalous changes in the comet’s activity could be pushing the cavity away from the nucleus.

While one of the cavity detections, on 29 July, occurred in conjunction with a strong outburst of gas and dust recorded by other instruments on Rosetta, this seems to be an isolated case. Almost all of the other observations of magnetic field-free regions, including the one recorded on 26 July, were not accompanied by any appreciable increase of outgassing.

“To account for such a big cavity in the simulations, we would need the outgassing rate to be 10 times higher than was measured at the comet by ROSINA,” says co-author Karl-Heinz Glassmeier from Technische Universität Braunschweig, Germany, principal investigator of RPC-MAG.

The most likely explanation seems to lie, instead, in the dynamical nature of the cavity boundary.

Boundaries between plasma regions with different properties are often unstable, and small oscillations can arise in the pile-up region of the solar wind, where it encounters the magnetic field-free region, on the Sun-facing side of the comet. If these oscillations propagate and get amplified along the boundary, in the direction opposite the Sun, they could easily cause the cavity to grow in size.

Such a moving instability would also explain why the measurements of magnetic field-free regions are sporadic and mainly span several minutes, with the 26 July one lasting 25 minutes and the longest one, recorded in November, about 40 minutes. The short duration of the detections is not a result of Rosetta crossing the cavity – the spacecraft moves much too slowly with respect to the comet – but of the magnetic field-free regions repeatedly passing through the spacecraft.

“What we are seeing is not the main part of the cavity but the smaller pockets at the cavity boundary, which are occasionally pushed farther away from the nucleus by the waves propagating along the boundary,” adds Charlotte.

Scientists are now busy analysing all the magnetic field-free events recorded by Rosetta, to learn more about the properties of the plasma in the comet environment and its interaction with the solar wind. After perihelion, as the comet moved away from the Sun and its outgassing and dust production rate declined, the spacecraft was able to move closer to the nucleus, and the magnetometer continued detecting magnetic field-free regions for several months, until the latest detection in February 2016.

“Three decades ago, Giotto’s detection was a great success, because it was the first confirmation of the existence of a diamagnetic cavity at a comet,” says Matt Taylor, Rosetta Project Scientist at ESA.

“But that was only one measurement, while now we have seen the cavity at Rosetta’s comet come and go hundreds of times over many months. This is why Rosetta is there, living with the comet and studying it up close.”

“First detection of a diamagnetic cavity at comet 67P/Churyumov-Gerasimenko,” by C. Götz et al. is published in the journal Astronomy & Astrophysics.

The results will be presented at the 50th ESLAB Symposium “From Giotto to Rosetta”, held 14–18 March in Leiden, the Netherlands.