Rosetta continues to recover well from the problems experienced during the close flyby over the weekend of 28 March that resulted in the spacecraft entering safe mode. Some of the science instruments are now switched back on again, and more will follow in the coming week.

As a result of the safe mode, Rosetta moved onto an ‘escape trajectory’ taking it approximately 400 km from Comet 67P/C-G. An orbital correction manoeuvre was executed on 1 April to start to bring the spacecraft back again, and with a second manoeuvre executed on 4 April, the target distance of 140 km was reached on 8 April.

But the previous difficulties in navigation mean that the operations team needs to be cautious while bringing the spacecraft even closer. In particular, they will need to assess the behaviour of the spacecraft’s star trackers in the environment of the increasingly active comet, since the previous navigation issues resulted from the star trackers becoming confused by comet particles. 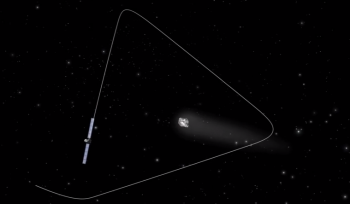 An example of ‘pyramid’ trajectories close to the comet. (Note this is a screen shot taken from our 2014 animation “Rosetta’s orbit around the comet”)

“This has ultimately meant a complete replanning of the upcoming flyby trajectories,” says Rosetta spacecraft operations manager Sylvain Lodiot. “We’re first moving to a terminator orbit at a distance of 140 km and then we’re targeting 100 km. Then we will adopt a similar strategy to when we first approached the comet in August last year. That is, we will fly ‘pyramid’ trajectories, starting at about 100 km on 11 April, and we’ll monitor how the spacecraft reacts before moving closer.”

Three of these pyramid trajectories are currently planned up until the end of April. The team will assess the situation each week before deciding to move closer or, if necessary, to move further away again. 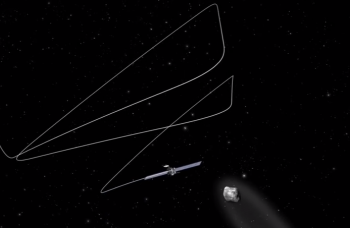 Visualistion of Rosetta’s approach to the comet in August 2014. Click for animation. Credits: ESA.

“We’re now assessing the impact of the new trajectory scheme on the planned science observations for the months ahead, including those which anticipated close flybys,” says Matt Taylor, Rosetta project scientist. “Our science operations team at ESAC is extremely busy working with the instrument teams to optimise science observations and associated spacecraft pointing for this new scheme. As we move forward, we will analyse what can be modified and improved in order to maximise science return within the capabilities of the spacecraft. We will be looking at examining all options to mitigate the issues we had and recover some of the science goals.”

We’ll provide details of future trajectory plans and the status of the science operations when this information is available.