The noble gas argon has been detected in the coma of Comet 67P/Churyumov-Gerasimenko for the first time, thanks to the ROSINA mass spectrometer on-board Rosetta. Its detection is helping scientists to understand the processes at work during the comet’s formation, and adds to the debate about the role of comets in delivering various ‘ingredients’ to Earth.

Four image NAVCAM montage of Comet 67P/C-G comprising images taken on 20 October 2014, during the timeframe of the ROSINA measurements reported today. The images were taken about 7.4 km from the comet surface. Credits: ESA/Rosetta/NAVCAM

During the time spent close to the comet, the ROSINA instrument was able to take an inventory of the key constituents of the comet’s coma, with many ingredients already reported (see links at end of article). Determining the chemical make-up of comets is a necessary step to understanding their role in bringing water and other ingredients to the inner planets during the Solar System’s early history.

The so-called noble gases (helium, neon, argon, krypton, xenon, and radon) rarely react chemically with other elements to form molecules, mostly remaining in a stable atomic state, representative of the environment around a young star in which planets, comets, and asteroids are born.

In addition, their abundance and isotopic compositions can be compared to the values known for Earth and Mars, and for the solar wind and meteorites, for example. The relative abundance of noble gases in the atmospheres of terrestrial planets is largely controlled by the early evolution of the planets, including outgassing via geological processes, atmospheric loss, and/or delivery by asteroid or cometary bombardment. Thus the study of noble gases in comets can also provide information on these processes.

However, noble gases are very easily lost from comets through sublimation, and so this first detection of argon at Comet 67P/C-G is a key discovery. Not only that, but it is also an important step in determining if comets of this type played any significant role in the noble gas inventory of the terrestrial planets. 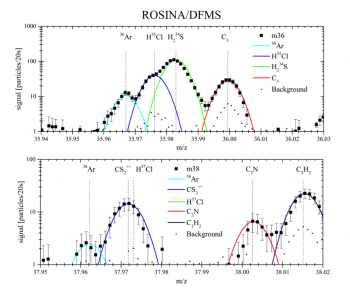 ROSINA-DFMS mass spectra identifying the two isotopes of 36Ar and 38Ar in October 2014, along with other gases. The extreme high mass-resolution of DFMS is a prerequisite for separating and identifying the two argon isotopes. The spacecraft background spectrum was obtained on 2 August 2014, before the comet signal became apparent. (m/z) = mass/charge. Data from Balsiger et al (2015).

Scientists analysing data from ROSINA’s high-resolution Double Focusing Mass Spectrometer (DFMS) identified argon, along with other gases, in the coma spectra of Comet 67P/C-G in October 2014. They identified 36Ar and 38Ar, yielding an isotopic ratio for 36Ar/38Ar of 5.4 ± 1.4, which is compatible with Solar System values: for Earth, this isotopic ratio is 5.3, while for the solar wind it is 5.5.

The relative abundance of argon to other gases was also investigated. For example, the abundance of argon relative to water vapour was determined to be between 0.1 x 10^–5 and 2.3 x 10^–5, the range of values measured being due to variable solar illumination, which influences the rate of water sublimation on different parts of the comet nucleus.

“Even though the argon signal is very low overall, this unambiguous first in-situ detection of a noble gas at the comet demonstrates the impressive sensitivity of our instrument,” says Professor Kathrin Altwegg, principal investigator of the ROSINA instrument at the University of Bern.

“The argon-to-water ratio varied by more than a factor of 20. While the very volatile argon can escape under any conditions, water sublimation depends strongly on the amount of sunlight being received, and so with it the argon-to-water ratio,” explains Professor Hans Balsiger, also from the University of Bern, and lead author of the paper reporting the discovery.

“In contrast, the relative abundance of argon to molecular nitrogen is quite stable – explained by the fact that argon and nitrogen have similar high volatilities.”

Although the measured abundance of argon-to-water spans a wide range, it still has implications for the question of whether comets brought water to Earth. That is because the argon-to-water ratio at Earth is only 6.5 x 10^–8, several orders of magnitude lower than observed for 67P/C-G.

“The relatively high argon content of Comet 67P/C-G compared with Earth again argues against a cometary origin for terrestrial water, in an independent way to the similar finding indicated by the earlier ROSINA result on the deuterium-to-hydrogen ratio for 67P/C-G,” comments Hans.

The argon detection can also be used to learn about the conditions in which the comet formed.

“The argon we detected comes from inside the icy nucleus of the comet; the nature of that ice – how, when, and where it formed – determines how it captured and subsequently released the gases we are measuring” says Kathrin. 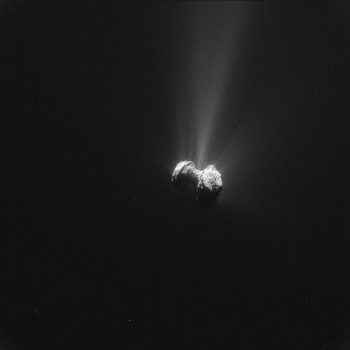 The two simplest forms of ice are crystalline and amorphous. These form at different temperatures and pressures, capturing and releasing gases in different ways. Argon, nitrogen, carbon monoxide, along with the heavier noble gases krypton and xenon are particularly useful for distinguishing between the various possibilities, because they remain in the same condition as when they were first incorporated into the comet.

Models can be used to predict how readily highly-volatile gases were incorporated into the icy grains that grew at low temperature in the protosolar nebula. These models show that the high abundance of argon at Comet 67P/C-G and the good correlation with nitrogen are both consistent with the comet forming in the cold outer reaches of the Solar System.

Almost a year has passed since these argon data were collected. Now that the comet has passed perihelion, its closest point to the Sun along its orbit, the density of the coma has increased greatly, implying that searches for even rarer gases should be possible.

However, the increased activity of 67P/C-G means that Rosetta cannot fly close to the comet without running into navigation issues, and therefore it is currently operating at distances greater than 350 km from the comet’s nucleus: this week, it has embarked on a trajectory taking it 1500 km from the comet in order to study the wider coma and plasma environment.

The ROSINA team are therefore eagerly waiting for Rosetta to return to closer distances as activity dies down in the coming months, in order to continue their investigation of the noble gases – including searching for krypton and xenon – to add further insights into the part played by comets in the delivery of these ingredients to Earth.

The paper “Detection of argon in the coma of comet 67P/Churyumov-Gerasimenko,” by H. Balsiger et al is published online in Science Advances.

About ROSINA
ROSINA is the Rosetta Orbiter Spectrometer for Ion and Neutral Analysis instrument and comprises two mass spectrometers: the Double Focusing Mass Spectrometer (DFMS) and the Reflectron Time of Flight mass spectrometer (RTOF) – and the COmetary Pressure Sensor (COPS). The measurements reported here were conducted with DFMS. The ROSINA team is led by Kathrin Altwegg of the University of Bern, Switzerland.