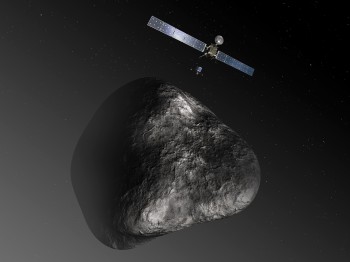 It’s official, Rosetta instruments are ready for action! The Rosetta team had a commissioning ‘close out’ review yesterday where each of the orbiter and lander instruments were given a formal ‘go’ for routine science operations.

Rosetta Mission Manager Fred Jansen says: “As you’ve read here on the blog already, a couple of the instruments were a little sleepy to start with, but we are very pleased – and relieved – to find that they are now all in good working order, ready to analyse the comet and its environment.”

Today, 14 May, Rosetta is around 1.5 million kilometres from comet 67P/Churyumov-Gerasimenko, and has already checked off one of ten rendezvous manoeuvres needed to arrive at the comet in August.

Now that we’ve cleared these two milestones – commissioning and a successful test burn manoeuvre – we can share some much-awaited new views of the comet with you… later this week. No spoilers now, but you won’t be disappointed!

Read more about the manoeuvres here.

And here’s a summary of the instrument-related blog posts we’ve had during the 6-week instrument commissioning period:

15 April: COSIMA checked out and ready for collecting comet dust

09 May: Calibration and a MIDAS selfie

09 May: ROSINA: good things come to those who wait!

We expect more instrument stories to be shared as we get closer to the comet, so do stay tuned!