Unlike the orbiter, which had to wake up and establish contact with Earth autonomously based on a pre-set alarm clock, Philae and all of the scientific instruments on the mission get a personal wake-up call from Earth (via Rosetta). Philae’s wake-up command was in fact uploaded last week and executed at 06:00 GMT this morning, with a confirmation signal picked up when the satellite next communicated with Earth, at 11:35 GMT. 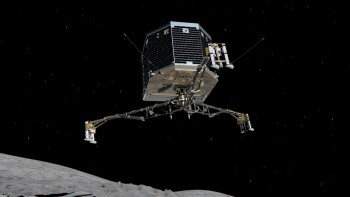 Philae’s daring attempt to land on comet 67P/Churyumov-Gerasimenko is pencilled in for 11 November, after extensive mapping by the orbiter in August and September to choose a suitable landing site. Right now, we know next to nothing about the geology or activity of the comet, both of which will play deciding roles in where Philae can land safely.

As Rosetta project scientist Matt Taylor puts it: “Landing on the surface is the cherry on the icing on the cake for the Rosetta mission on top of all the great science that will be done by the orbiter in 2014 and 2015. A good chunk of this year will be spent identifying where we will land, but also taking vital measurements of the comet before it becomes highly active. No one has ever attempted this before and we are very excited about the challenge!”

Philae’s primary science mission is based on its initial 64-hour battery lifetime, during which time it is expected to send back high-resolution pictures of comet 67P/CG’s surface and perform on-the-spot analysis of the composition of its ices and organic material. A drilling system will also take samples from a depth of 23 centimetres below the surface and will feed these to the on-board laboratory for analysis. The data will be relayed back to Earth via Rosetta, complementing the extensive measurements made by the orbiter.

Philae also carries solar cells to recharge the batteries, allowing for extended operations on the comet, the duration of which will depend on the specific landing conditions and the accumulation of cometary dust on the cells.

The Rosetta orbiter will remain alongside the comet for at least a year more, watching as its dust and gas surface is transformed by increasing activity as it moves into the warmer inner Solar System – closest approach to the Sun is in August 2015 – and then as the comet moves back towards the outer Solar System again.

Today’s activities confirm that Philae is alive and well; the lander and its ten scientific instruments will undergo much more extensive checks throughout April.

Meanwhile, Rosetta’s MIDAS , COSIMA and ROSINA instruments are also being tested today. The instruments ALICE, CONSERT, GIADA, RPC, and RSI also began testing this week. And one instrument – the OSIRIS imaging system – has already passed the commissioning phase with a clean bill of health. See yesterday’s post for the OSIRIS “first-light” image of the comet, and an earlier post – Instrumental – for an overview of the six-week instrument commissioning period.