The MIDAS instrument was the first of its type to ever be launched into space. An Atomic Force Microscope like MIDAS is designed to measure the smallest objects possible, and in 3D! For MIDAS a human hair is already too big to easily analyse… 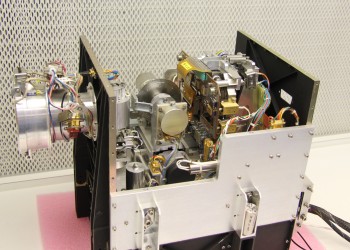 The instrument is designed to collect dust particles flung from the comet as it is heated by the Sun and becomes active. These dust particles are what make comets such dazzling light shows in the night sky. As comets pass through the inner Solar System, the ices buried below their dark surface are gradually heated. At some point they sublimate (the pressure is too low for liquid to exist, so the ices turns straight to a gas). As this gas streams away from the comet’s surface, it drags along dust particles – themselves tiny pieces of rock, ice and organic material. Sunlight reflected from billions of such particles result in the beautiful dust tails seen from Earth. By pointing telescopes at comets and their tails, astronomers have learned quite a lot about this dust – its approximate size, and sometimes even which minerals it contains. By looking at the way light is polarised as it reflects from the grains, we also know something about the shape: cometary dust particles are not spherical, but have a more complex shape.

In fact dust is found all over the Solar System – not just behind your sofa! As the Earth moves around the Sun, we catch a lot of these particles (in fact several tonnes per day!). Special aircraft equipped with sticky collectors mounted on their wings collect these particles. Not all of these come from comets, but scientists studying these particles can make a good guess as to which do. These dust grains (known as “Interplanetary Dust Particles”, or IDPs) are indeed not round, but rather “fluffy”.

The problem with these methods is that they don’t tell us about the microscopic nature of particles from a specific comet. Telescopic observations collect and average the light from billions of particles from a given comet, and IDPs give us very specific data, but we don’t know where they came from (their “provenance”). To find out more, we have to sample dust from a specific comet, and take many other measurements. Only when we have all the data can we understand what makes comets tick, and begin to unlock the secrets of the early Solar System. The Stardust mission did just this, and revolutionised our understanding of comets and cometary dust. But this was a flyby mission, and even though the dust was collected in the gentlest way possible, much of it was still broken or melted as it was collected. To really understand these fragile particles we need to rendezvous with a comet, collect dust, and analyse it there and then. And this is exactly what MIDAS will do, onboard Rosetta! 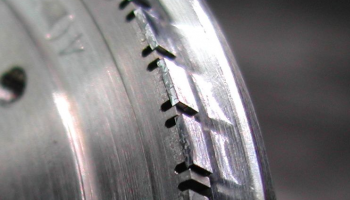 One of the key advantages of Rosetta compared with previous missions is that we don’t just make a “flyby” but we catch up with, and stay alongside, the comet as it swoops through the inner Solar System. This means we can make detailed studies of the comet as it evolves, that is, as it is heated and begins to shed gas and dust. The instruments onboard Rosetta are specifically designed to take advantage of this; they are really miniature laboratories that can reach out and grab, touch and analyse the comet and its environment.

MIDAS is one of several instruments that will study cometary dust. COSIMA will collect dust and determine what it is made of, and GIADA measures how many dust particles there are, how big they are and how fast they move. MIDAS is interested in the smallest particles, which are typically 1 µm large. Remember that 1 µm is a millionth of a metre, and that a human hair is about 50 µm wide. So these are really small bits of rock!

To collect particles MIDAS has a funnel, which usually points towards the comet. Behind this is a wheel with sticky targets mounted around its circumference. After dust has been collected, the wheel is rotated to move the dust to the microscope for analysis.

An Atomic Force Microscope is a very special type of microscope. It doesn’t use light – the resolution of an optical image is limited by its wavelength, and we want to look at smaller details. Instead it works more like an old-fashioned record player; it has a sharp needle that is moved over the sample. Instead of music, we measure the deflection of this needle, and therefore the height of the sample. By scanning over the dust grain, line by line, we build a 3D picture. Knowing the size, shape and structure of these particles tells us about how and where these particles formed, how they interact with gas and light, how they stick to other particles and much more.
Images courtesy Mark Bentley/Institut für Weltraumforschung, Österreichische Akademie der Wissenschaften, Graz, Austria.