Rosetta’s comet approached its most active period last year, the spacecraft spotted carbon dioxide ice – never before seen on a comet – followed by the emergence of two unusually large patches of water ice.

The carbon dioxide ice layer covered an area comparable to the size of a football pitch, while the two water ice patches were each larger than an Olympic swimming pool and much larger than any signs of water ice previously spotted at the comet.

The three icy layers were all found in the same region, on the comet’s southern hemisphere.

Sequence of 23 images of Comet 67P/Churyumov–Gerasimenko taken with Rosetta’s OSIRIS narrow-angle camera on 4 July 2015, about a month before the comet’s closest approach to the Sun. The three-colour images are made from observations at 480, 649 and 882 nm. The images are taken at 30 minute intervals and span a full day at the comet, which spins around its axis in about 12.4 hours. The Sun is towards the top of the frame. Credit: ESA/Rosetta/MPS for OSIRIS Team MPS/UPD/LAM/IAA/SSO/INTA/UPM/DASP/IDA; Reprinted with permission from S. Fornasier et al., Science 10.1126/science.aag2671 (2016)

A combination of the complex shape of the comet, its elongated path around the Sun and the substantial tilt of its spin, seasons are spread unequally between the two hemispheres of the double-lobed Comet 67P/Churyumov–Gerasimenko.

However, shortly before the comet’s closest approach to the Sun in August 2015, the seasons changed and the southern hemisphere experienced a brief but intense summer, exposing this region to sunlight again.

In the first half of 2015, as the comet steadily became more active, Rosetta observed water vapour and other gases pouring out of the nucleus, lifting its dusty cover and revealing some of the comet’s icy secrets.

This is the first detection of solid carbon dioxide on any comet, although it is not uncommon in the Solar System – it is abundant in the polar caps of Mars, for example. 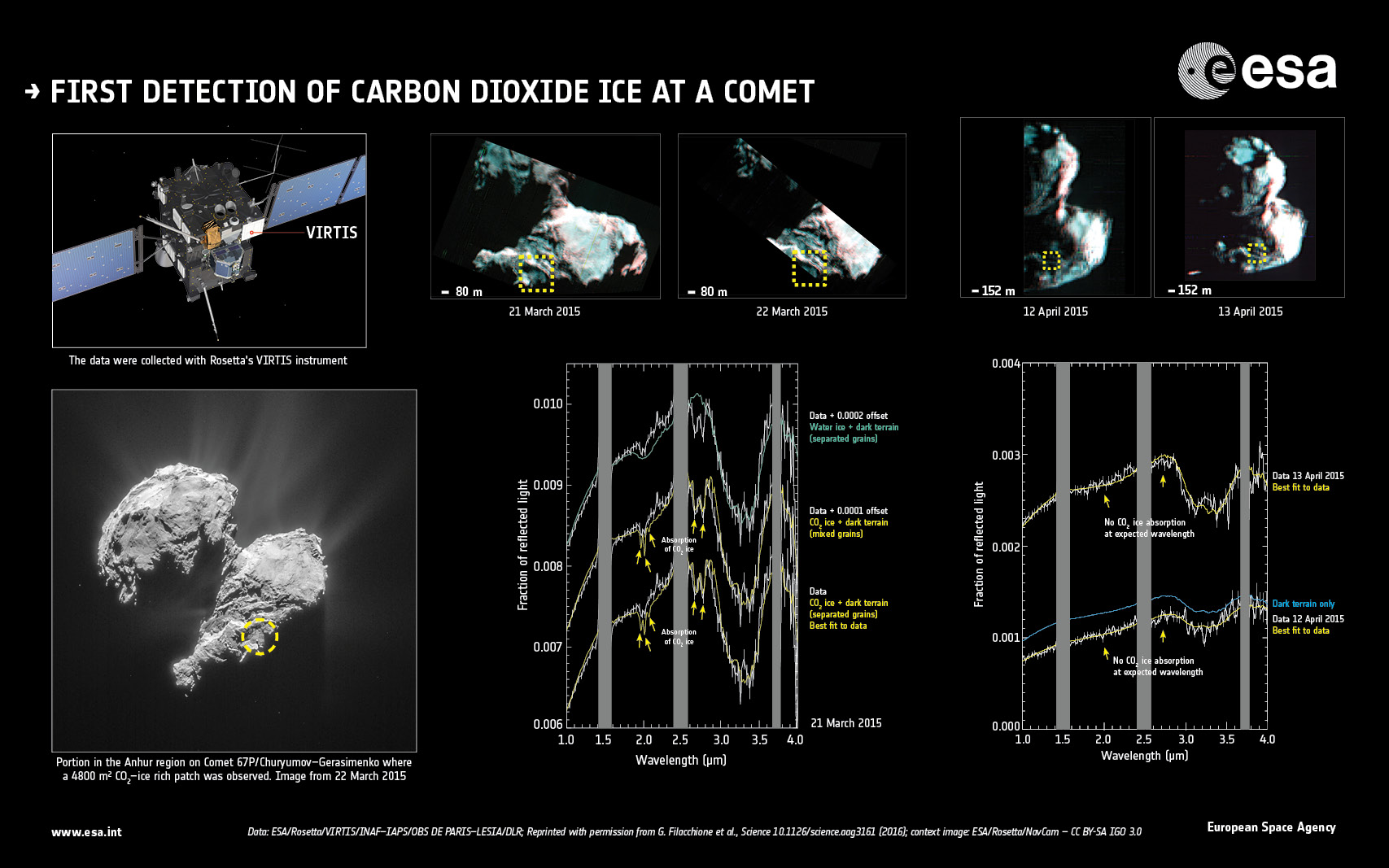 Comet images and spectra taken by VIRTIS on 21–22 March, with the unmistakable signature of carbon dioxide ice: a series of three absorption lines at wavelengths around 2 microns, and two additional absorption lines at 2.7 and 2.78 microns. These characteristic features are not present in the spectrum of water ice. Later images and spectra, taken by VIRTIS on 12–13 April, show that the signature of carbon dioxide ice had disappeared. Credit: ESA/Rosetta/VIRTIS/INAF-IAPS/OBS DE PARIS-LESIA/DLR; Reprinted with permission from G. Filacchione et al., Science 10.1126/science.aag3161 (2016); context image: ESA/Rosetta/NavCam – CC BY-SA IGO 3.0

“We know comets contain carbon dioxide, which is one of the most abundant species in cometary atmospheres after water, but it’s extremely difficult to observe it in solid form on the surface,” explains Gianrico Filacchione from Italy’s INAF-IAPS Istituto di Astrofisica e Planetologia Spaziali, who led the study.

In the comet environment, carbon dioxide freezes at –193ºC, much below the temperature where water turns into ice. Above this temperature, it changes directly from a solid to a gas, hampering its detection in ice form on the surface.

By contrast, water ice has been found at various comets, and Rosetta detected plenty of small patches on several regions.

“We hoped to find signs of carbon dioxide ice and had been looking for it for quite a while, but it was definitely a surprise when we finally detected its unmistakable signature,” adds Gianrico.

The patch, consisting of a few percent of carbon dioxide ice combined with a darker blend of dust and organic material, was observed on two consecutive days in March. This was a lucky catch: when the team looked at that region again around three weeks later, it was gone.

Assuming that all of the ice had turned into gas, the scientists estimated that the 80 x 60 m patch contained about 57 kg of carbon dioxide, corresponding to a 9 cm-thick layer. Its presence on the surface is likely an isolated rare case, with the majority of carbon dioxide ice being confined to deeper layers of the nucleus.

Gianrico and his collaborators believe the icy patch dates back a few years, when the comet was still in the cold reaches of the outer Solar System and the southern hemisphere was experiencing its long winter. At that time, some of the carbon dioxide still outgassing from the interior of the nucleus condensed on the surface, where it remained frozen for a very long while, and vaporised only as the local temperature finally rose again in April 2015.

This reveals a seasonal cycle of carbon dioxide ice, which unfolds over the comet’s 6.5 year orbit, as opposed to the daily cycle of water ice, also spotted by VIRTIS shortly after Rosetta’s arrival.

Interestingly, shortly after the carbon dioxide ice had disappeared, Rosetta’s OSIRIS narrow-angle camera detected two unusually large patches of water ice in the same area, between the southern regions of Anhur and Bes. 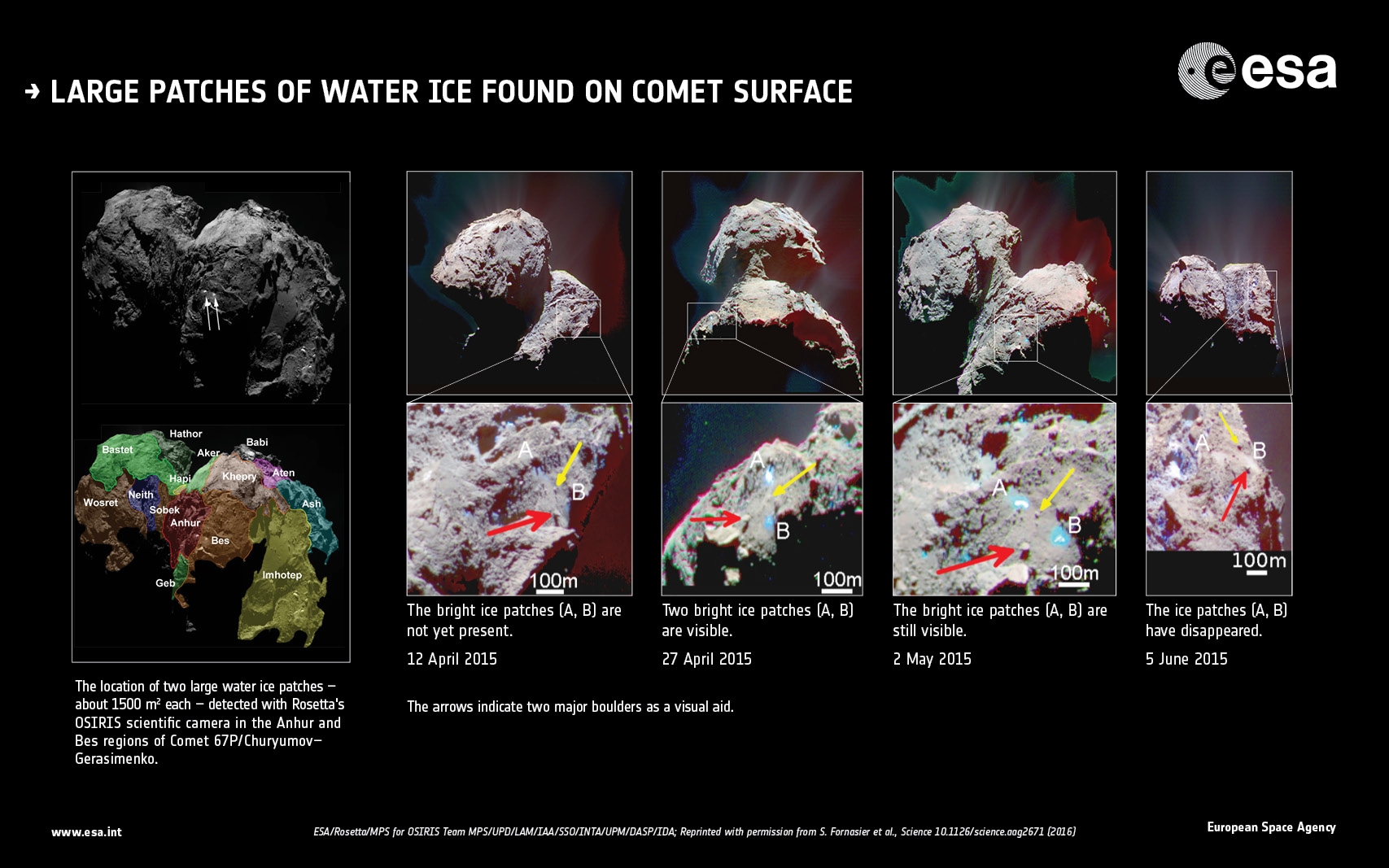 The appearance of two bright patches of water ice (indicated as A and B) in the Anhur and Bes regions of Comet 67P/C–G. The patches were first observed in April 2015 and persisted for about 10 days before they completely disappeared. The water ice patch indicated as A was likely lurking underneath the carbon dioxide ice sheet revealed by Rosetta’s VIRTIS instrument about a month before. Credit: ESA/Rosetta/MPS for OSIRIS Team MPS/UPD/LAM/IAA/SSO/INTA/UPM/DASP/IDA; Reprinted with permission from S. Fornasier et al., Science 10.1126/science.aag2671 (2016)

“We had already seen many metre-sized patches of exposed water ice in various regions of the comet, but the new detections are much larger, spanning some 30 x 40 m each, and they persisted for about 10 days before they completely disappeared,” says Sonia Fornasier from LESIA–Observatoire de Paris and Université Paris Diderot, France, lead scientist of the study focusing on seasonal and daily surface colour variations.

These ice-rich areas appear as very bright portions of the comet surface reflecting light that is bluer in colour compared with the redder surroundings. Scientists have experimented with mixtures of dust and water ice to show that, as the concentration of ice in them increases, the reflected light becomes gradually bluer in colour, until reaching a point where equal amounts of light are reflected in all colours.

The two newly detected patches contain 20–30% of water ice mixed with darker material, forming a layer up to 30 cm thick of solid ice. One of them was likely lurking underneath the carbon dioxide ice sheet revealed by VIRTIS about a month before.

“On a global scale, we also found that the entire comet surface turned increasingly bluer in colour as it approached the Sun and the intense activity lifted off large amounts of dust, exposing more of the ice-rich terrain underneath,” explains Sonia.

As the comet moved away from the Sun, the scientists observed the overall colour of the comet surface gradually turning redder again. 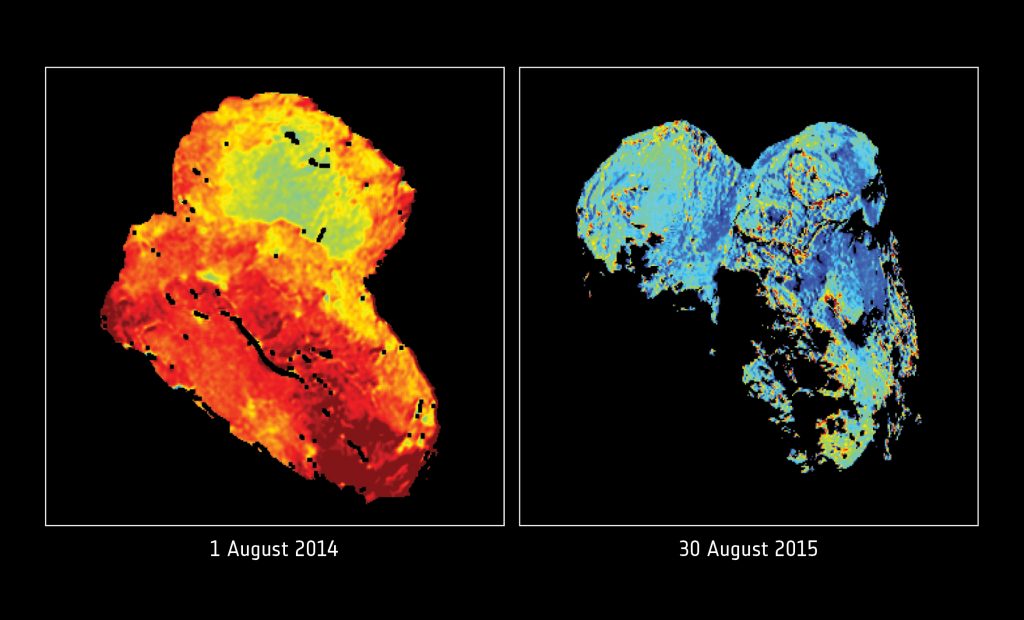 The colour of visible light reflected by Comet 67P/Churyumov–Gerasimenko on 1 August 2014 (left), shortly before Rosetta arrived at the comet, and a year later, on 30 August 2015 (right), shortly after the comet’s closest approach to the Sun. The maps are derived from the comparison of images taken at wavelengths between 535 and 882 nm with Rosetta’s OSIRIS narrow-angle camera. Credit: ESA/Rosetta/MPS for OSIRIS Team MPS/UPD/LAM/IAA/SSO/INTA/UPM/DASP/IDA; Reprinted with permission from S. Fornasier et al., Science 10.1126/science.aag2671 (2016)

They also revealed local variations of colour, indicative of the daily cycle of water ice. Quickly turning into water vapour when exposed to sunlight during the local daytime, it condensed back into thin layers of frost and ice as the temperature decreases after sunset, only to vaporise again on the following day.

The distribution of water ice beneath the dusty surface of the comet seems widely but not uniformly spread, with small patches punctuating the nucleus, appearing and disappearing as a result of the comet’s activity.

Occasionally, larger and thicker portions of ice are also uncovered, dating back to a previous approach to the Sun.

“These two studies of the comet’s icy content are revealing new details about the composition and history of the nucleus,” says Matt Taylor, ESA Rosetta project scientist.

“While the flight part of the mission is now over, the scientific exploitation of the enormous quantity of data collected by Rosetta continues.”

About VIRTIS
The Visible, InfraRed and Thermal Imaging Spectrometer VIRTIS was built by a consortium of Italy, France and Germany, under the scientific responsibility of IAPS, Istituto di Astrofisica e Planetologia Spaziali of INAF, Rome (IT), which lead also the scientific operations. The VIRTIS instrument development for ESA has been funded and managed by ASI, with contributions from Observatoire de Meudon financed by CNES and from DLR. The VIRTIS instrument industrial prime contractor was former Officine Galileo, now Leonardo (Finmeccanica Group) in Campi Bisenzio, Florence, IT.