This article is mirrored from the main ESA web portal and covers the results published in a new  paper in the journal Astronomy & Astrophysics titled “OSIRIS observations of metre-size exposures of H2O ice at the surface of 67P/Churyumov-Gerasimenko and interpretation using laboratory experiments,” by Antoine Pommerol et al. 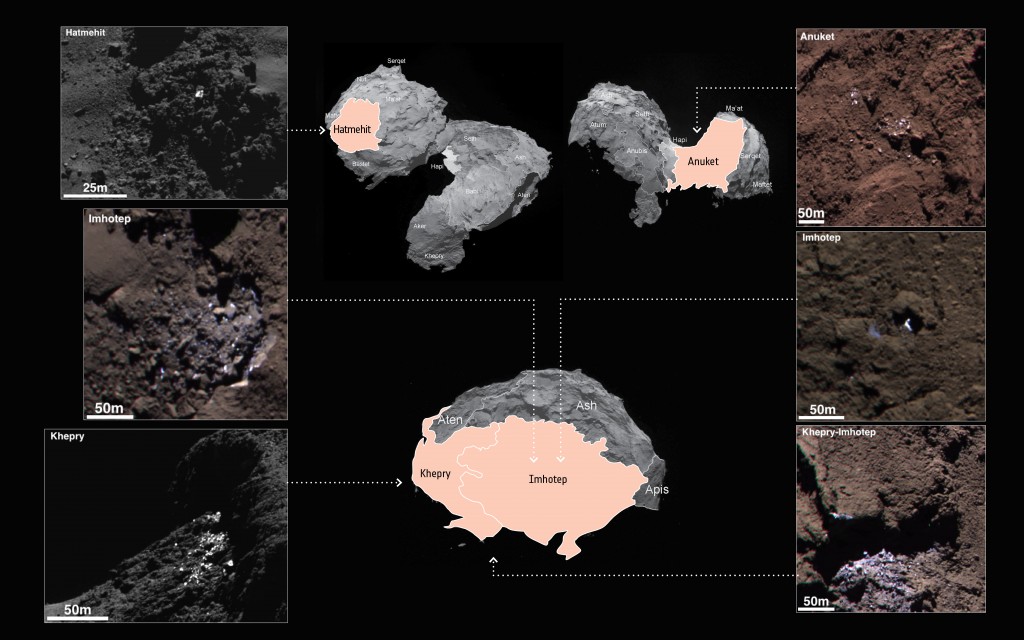 Examples of six different bright patches identified on the surface of Comet 67P/Churyumov-Gerasimenko in OSIRIS narrow-angle camera images acquired in September 2014. The insets point to the broad regions in which they were discovered (not to specific locations). In total, 120 bright regions, including clusters of bright features, isolated features and individual boulders, were identified in images acquired during September 2014 when the spacecraft was between 20-50 km from the comet centre.
On the left hand side of the image a boulder with icy patches in Hatmehit (top) a cluster of icy features in Imhotep (middle) and a cluster in Khepry (bottom) is presented; on the right hand side a cluster in Anuket (top), a bright feature in Imhotep and a cluster close to the Khepry-Imhotep boundary (bottom) is shown. The false colour images are red-green-blue composites assembled from monochrome images taken at different times and have been stretched and slightly saturated to emphasis the contrasts of colour such that dark terrains appear redder and bright regions appear significantly bluer compared with what the human eye would normally see. This imaging technique allows scientists to determine more about the nature of the material; in this case the bluer colour indicates the presence of ice.
Credits: ESA/Rosetta/MPS for OSIRIS Team MPS/UPD/LAM/IAA/SSO/INTA/UPM/DASP/IDA

Using the high-resolution science camera on board ESA’s Rosetta spacecraft, scientists have identified more than a hundred patches of water ice a few metres in size on the surface of Comet 67P/Churyumov-Gerasimenko.

Rosetta arrived at the comet in August 2014 at a distance of about 100 km and eventually orbited the comet at 10 km or less, allowing high-resolution images of the surface to be acquired.

A new study just published in the journal Astronomy & Astrophysics focuses on an analysis of bright patches of exposed ice on the comet’s surface.

Based on observations of the gas emerging from comets, they are known to be rich in ices. As they move closer to the Sun along their orbits, their surfaces are warmed and the ices sublimate into gas, which streams away from the nucleus, dragging along dust particles embedded in the ice to form the coma and tail.

But some of the comet’s dust also remains on the surface as the ice below sublimates, or falls back on to the nucleus elsewhere, coating it with a thin layer of dusty material and leaving very little ice directly exposed on the surface. These processes help to explain why Comet 67P/Churyumov-Gerasimenko and other comets seen in previous flyby missions are so dark.

Despite this, Rosetta’s suite of instruments has already detected a variety of gases, including water vapour, carbon dioxide and carbon monoxide, thought to originate from frozen reservoirs below the surface. 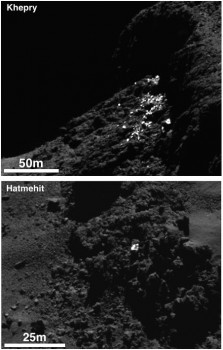 Example of a cluster of bright spots on Comet 67P/Churyumov-Gerasimenko found in the Khepry region (top) and an individual boulder with bright patches on its surface in the Hatmehit region (bottom). The bright patches are thought to be exposures of water-ice.
Both images shown here are subsets of OSIRIS narrow-angle camera images taken on 30 September, when the spacecraft was about 20 km from the comet centre.
Credits: ESA/Rosetta/MPS for OSIRIS Team MPS/UPD/LAM/IAA/SSO/INTA/UPM/DASP/IDA

Now, using images taken with Rosetta’s OSIRIS narrow-angle camera last September, scientists have identified 120 regions on the surface of Comet 67P/Churyumov-Gerasimenko that are up to ten times brighter than the average surface brightness.

Some of these bright features are found in clusters, while others appear isolated, and when observed at high resolution, many of them appear to be boulders displaying bright patches on their surfaces.

The clusters of bright features, comprising a few tens of metre-sized boulders spread over several tens of metres, are typically found in debris fields at the base of cliffs. They are most likely the result of recent erosion or collapse of the cliff wall revealing fresher material from below the dust-covered surface.

By contrast, some of the isolated bright objects are found in regions without any apparent relation to the surrounding terrain. These are thought to be objects lifted up from elsewhere on the comet during a period of cometary activity, but with insufficient velocity to escape the gravitational pull of the comet completely.

In all cases, however, the bright patches were found in areas that receive relatively little solar energy, such as in the shadow of a cliff, and no significant changes were observed between images taken over a period of about a month. Furthermore, they were found to be bluer in colour at visible wavelengths compared with the redder background, consistent with an icy component.

“Water ice is the most plausible explanation for the occurrence and properties of these features,” says Antoine Pommerol of the University of Bern and lead author of the study. 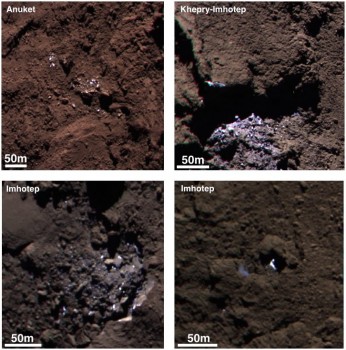 Examples of icy bright patches seen on Comet 67P/Churyumov-Gerasimenko during September 2014. The two left hand images are subsets of OSIRIS narrow-angle camera images acquired on 5 September; the right hand images were acquired on 16 September. During this time the spacecraft was about 30-40 km from the comet centre. The images are false colour red-green-blue composites assembled from monochrome images acquired at different times with the 882.1nm (red), 649.2nm (green) and 360.0nm (blue) channels. Each channel was stretched and slightly saturated to emphasis the contrasts of colour across the scene such that dark terrains appear redder and bright regions appear significantly bluer compared with what a human eye would normally see.
While various ices mixed with dust would be consistent with the blue signature, taken with other observations, the various properties of the bright patches point to water-ice.
Credits: ESA/Rosetta/MPS for OSIRIS Team MPS/UPD/LAM/IAA/SSO/INTA/UPM/DASP/IDA

“At the time of our observations, the comet was far enough from the Sun such that the rate at which water ice would sublimate would have been less than 1 mm per hour of incident solar energy. By contrast, if carbon dioxide or carbon monoxide ice had been exposed, it would have rapidly sublimated when illuminated by the same amount of sunlight. Thus we would not expect to see that type of ice stable on the surface at this time.”

The team also turned to laboratory experiments that tested the behaviour of water ice mixed with different minerals under simulated solar illumination in order to gain more insights into the process. They found that after a few hours of sublimation, a dark dust mantle a few millimetres thick was formed. In some places this acted to completely conceal any visible traces of the ice below, but occasionally larger dust grains or chunks would lift from the surface and move elsewhere, exposing bright patches of water ice.

“A 1 mm thick layer of dark dust is sufficient to hide the layers below from optical instruments,” confirms Holger Sierks, OSIRIS principal investigator at the Max Planck Institute for Solar System Research in Göttingen.

“The relatively homogeneous dark surface of the nucleus of Comet 67P/Churyumov-Gerasimenko, only punctuated by some metre-scale bright dots, can be explained by the presence of a thin dust mantle composed of refractory mineral and organic matter, with the bright spots corresponding to areas from which the dust mantle was removed, revealing a water-ice-rich subsurface below.”

The team also speculates about the timing of the formation of the icy patches. One hypothesis is that they were formed at the time of the last closest approach of the comet to the Sun, 6.5 years ago, with icy blocks ejected into permanently shadowed regions, preserving them for several years below the peak temperature needed for sublimation.

Another idea is that even at relatively large distances from the Sun, carbon dioxide and carbon monoxide driven-activity could eject the icy blocks. In this scenario, it is assumed that the temperature was not yet high enough for water sublimation, such that the water-ice-rich components outlive any exposed carbon dioxide or carbon monoxide ice.

“As the comet continues to approach perihelion, the increase in solar illumination onto the bright patches that were once in shadow should cause changes in their appearance, and we may expect to see new and even larger regions of exposed ice,” says Matt Taylor, ESA’s Rosetta project scientist.

“Combining OSIRIS observations made pre- and post-perihelion with other instruments will provide valuable insight into what drives the formation and evolution of such regions.”

More information can be found in the paper, which is available to read online in Astronomy & Astrophysics, here.

The individual images making up the context images presented in this release are also provided below. All images credit: ESA/Rosetta/MPS for OSIRIS Team MPS/UPD/LAM/IAA/SSO/INTA/UPM/DASP/IDA 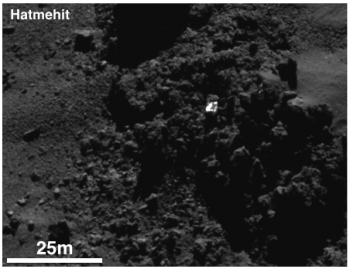 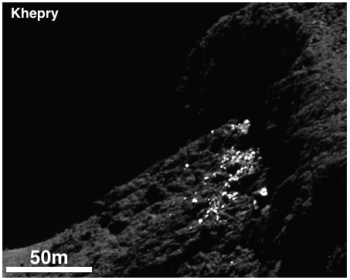 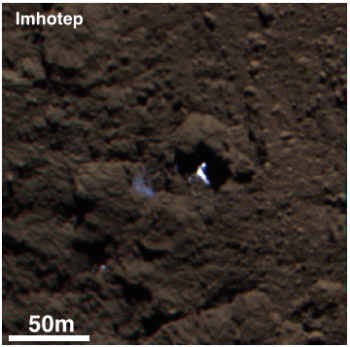 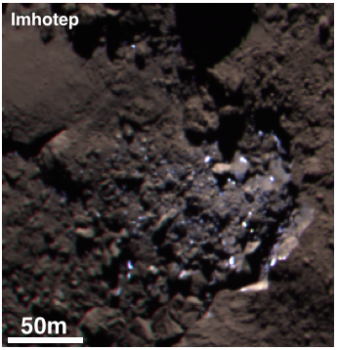 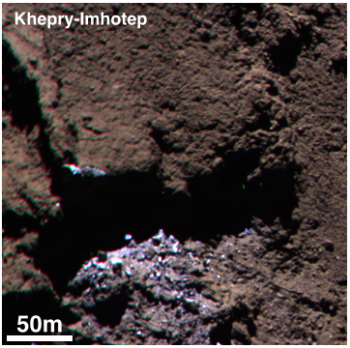 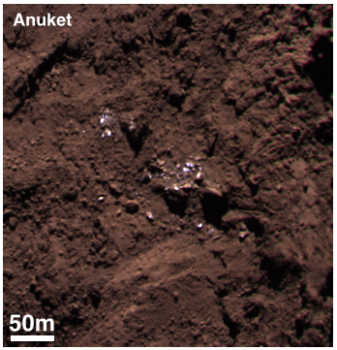