Living with a comet: a GIADA team perspective

Rosetta’s Grain Impact Analyser and Dust Accumulator GIADA has detected and measured the properties of some 6650 comet dust particles. Principal Investigator Alessandra Rotundi reports on the “beautiful results” that her team’s instrument has collected at Comet 67P/Churyumov-Gerasimenko.

GIADA has been on since May 2014, and we caught the first dust grain on 1 August 2014. The first love is never forgotten! It was the most exciting measurement, and such an emotion! I cannot say that it was unexpected, though; we actually estimated that we’d start detecting dust in that period, and in particular, one of the GIADA Co-Investigators (Eberhard Grün) foresaw exactly 1 August as the starting point for our dust detections!

Since then GIADA has collected 6650 dust particles. For 4825, the cross-sections are known, and for 1825, the momentum, mass and speed are also known. Among this group we also know the cross-section for 307 particles. We always hope for combined particle detections by the GDS (Grain Detection System) and the IS (Impact Sensor) subsystems because these combined detections provide the greatest number of information for individual dust particle, i.e. the momentum, the speed, the mass, the optical cross section and the density. 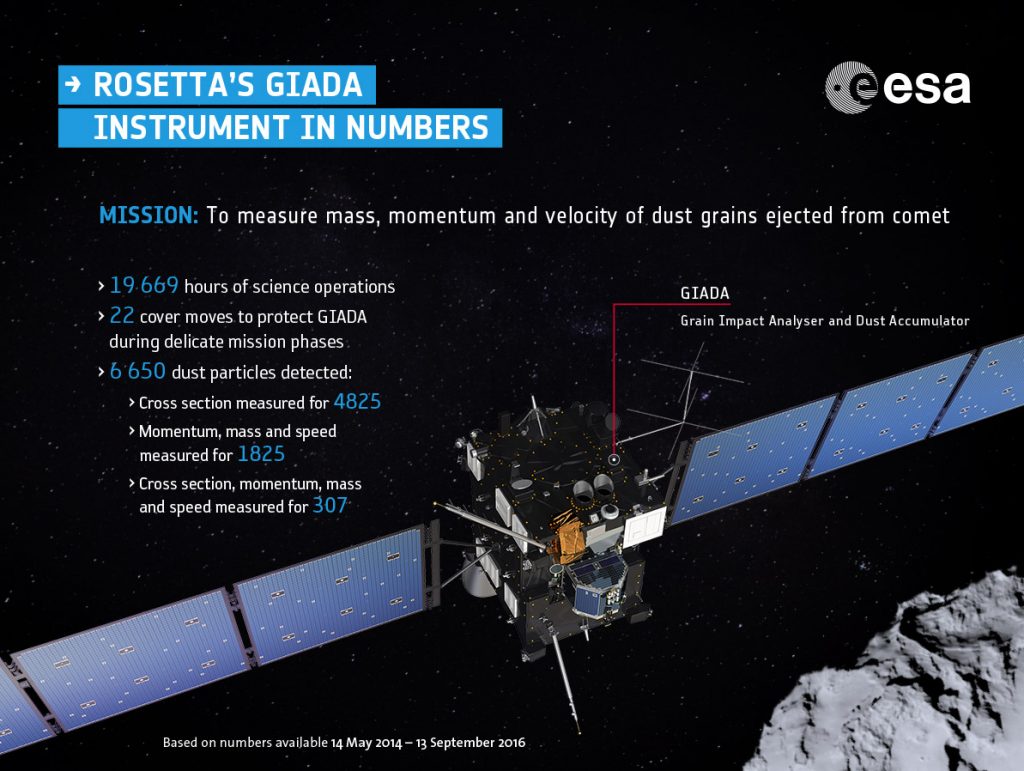 We’re very happy with what we’ve achieved, but of course there were times where we could not collect any dust due to routine operational activities of the spacecraft and when we were very far from the comet for spacecraft safety reasons. For example, there were times when we had to close the cover to protect the sensitive instrument interior during cruise phase, during the approach manoeuvres, and 22 times during our time at the comet. We also had to switch off the GDS laser subsystem 47 times for safety reasons, for example when the spacecraft was pointed (for the benefit of other instrument measurements) such that sunlight would be shining directly into the laser curtain of the instrument. This action prevented overheating of the lasers and saturating the GDS subsystem, effectively making it blind.

At some point we also noticed a critical increase in ‘noise’ recorded by GDS: it was due to the dust deposited on the optics. To fix this issue we had to send software patches to increase the subsystem’s noise thresholds in order to be able to continue our observations. This operation was performed four times and always with success.

Aside from that very first dust collection, two other events stand out as being particularly exciting for us. Without doubt one was the outburst on 19 February 2016 – the GIADA ‘events’ were the first clue that something interesting had happened, and what resulted in us alerting the other instrument teams to see what corresponding data they had collected.

There was another exciting event only a couple of weeks ago: on 5 September. A huge dust event was registered, and had in just a few hours about one-third of the combined GDS-IS events detected during the whole scientific phase! It’s going to be very interesting to analyse this data set – a first look suggests it is quite different to what we’ve seen before, so this will make for an interesting story (stay tuned!)

Of course, we are also looking forward to the end of mission descent, where we hope to collect even more interesting data.

Taking stock of the instrument performance over the lifetime of the mission I have to say that GIADA behaved greatly; we have really beautiful results and are exploiting the data to reach results well beyond what we had nominally expected.