Following the trail of a minuscule dust particle through the depths of space may seem far-fetched, but that is effectively what the GIADA team have been doing recently, as they described at the European Planetary Science Congress this week.

During the Rosetta special session at EPSC, the GIADA team reported the detection of 27 dust grains associated with Comet 67P/Churyumov-Gerasimenko during the month of August. 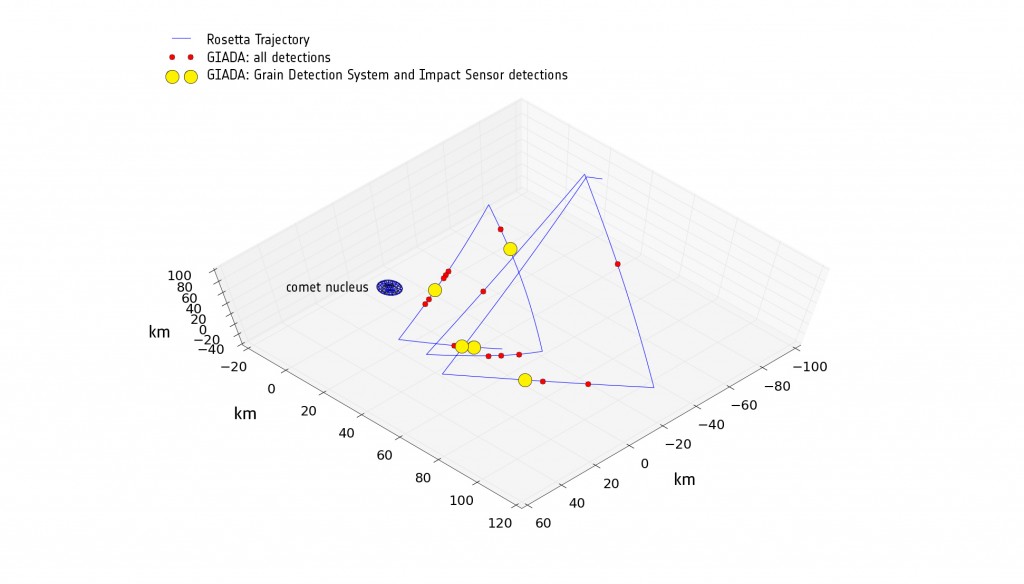 Of the 27 grains, five were seen by the Grain Detection System, which detects the grains and measures some of their optical properties, and also by the Impact Sensor, which measures their momentum.

Thus for this handful of grains, the team were able to measure their masses and velocities. Such measurements are particularly important, as they will allow the scientists to trace the paths of grains back to the comet and to even identify which regions on the comet they may have been ejected from. For these first five grains, that analysis is on-going.

The figure above shows the positions along the Rosetta flight path of 27 dust grains (red dots) detected by GIADA in August 2014. Five grains (yellow dots) were detected by both the Grain Detection System and the Impact Sensor. Some of the data points overlap or are hidden behind the yellow symbols.