Living with a comet: a COSIMA team perspective

Comet dust particles may be small, but they come in large numbers. COSIMA Principal Investigator Martin Hilchenbach shares some impressive facts about the instrument’s performance, and reflects on the personal highlights of the team during Rosetta’s mission. 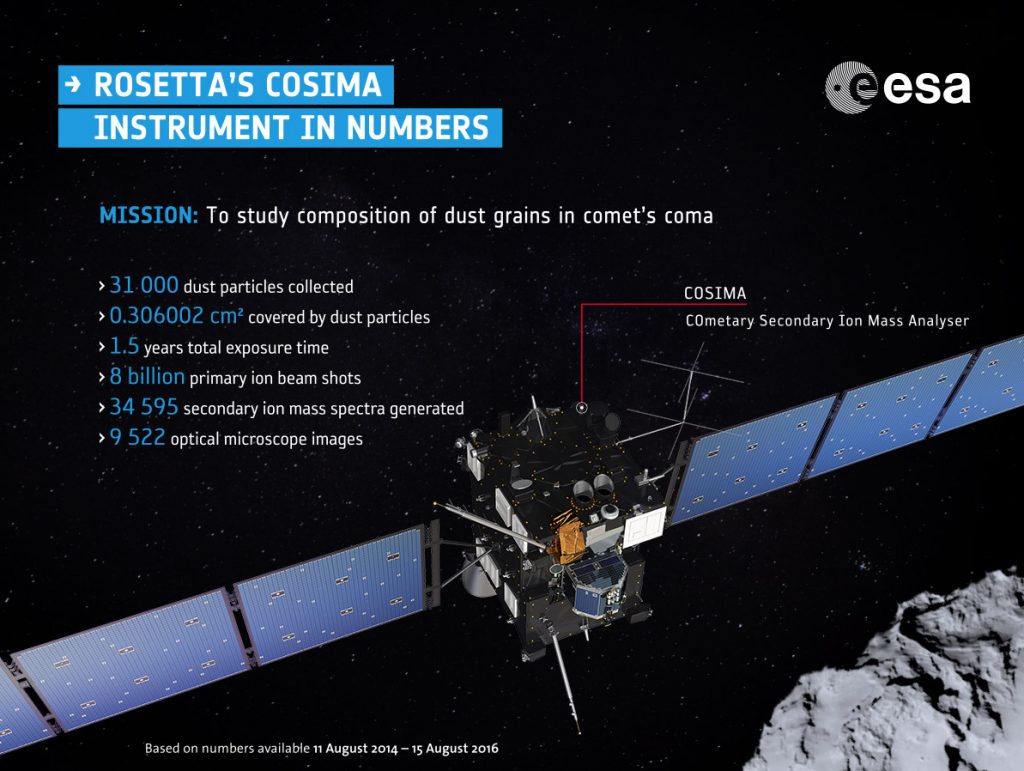 Rosetta’s dust analysing instrument COSIMA (COmetary Secondary Ion Mass Analyser) has had a busy two years at Comet 67P/Churyumov-Gerasimenko: 31 000 dust particles collected at the last count (mid-August 2016). And as Martin puts it “..which are soon to be returned to the surface of the comet!”

Impressively, one single COSIMA team member, Sihane Merouane,  identified and labelled all imaged particles and compiled the archive list, and 6053 particles now have proper names – the first assignments given for COSIMA and the wider Rosetta team members and their families. According to Martin, it would take around five hours to read out the list of names assigned to the particles on just one target. There have been 21 targets  in total exposed. 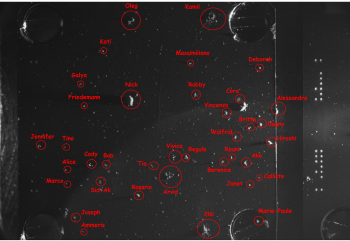 Meet some of the COSIMA grain family! The target plate measures 1cm across, and shows dust grains collected between 11 August and 12 December 2014. Credits: ESA/Rosetta/MPS for COSIMA Team MPS/CSNSM/UNIBW/TUORLA/IWF/IAS/ESA/BUW/MPE/LPC2E/LCM/FMI/UTU/LISA/UOFC/vH&S.

And these targets are small – just one centimetre square each. Of course, the comet dust is even smaller; COSIMA is optimized to study particles a few tens to hundreds of micrometres in size – although the largest particle imaged by COSIMA exceeded 2 mm!

The grains were identified in 9522 snapshots made by the COSIMA microscope, and selected grains were analysed with a secondary ion mass spectrometer. That is, they were fired at with a beam of indium ions, sparking individual ions (secondary ions) from their surfaces, which were then analysed by the mass spectrometer. This process reveals the composition of the grains, which in turn contributes to our understanding about the composition of the primordial matter from the early Solar System.

Martin notes: “We had to take a break with these particular measurements after 3 770 secondary mass spectra, between mid autumn 2014 and spring 2015, in order to restore the primary ion gun subsystem which operated outside of the nominal operational parameters. Thanks to the outstanding achievements of Andreas Koch, Laurent Thirkell, Jouni Rynö and Henning Fischer, we could continue using the gun and collected a further 30,825 mass spectra.”

Reflecting on how the team’s personal lives have evolved over the course of the mission, Martin notes that 7 team members and their spouses have collectively had 12 babies since Rosetta launched in 2004. He also notes that all the software written for the COSIMA development, testing, operation and archiving since 1998 has spanned 12 programming languages, more languages than spoken by the 59-strong COSIMA team.

For the software savvy readers amongst you, the 12 programming languages and the number of lines written in each are as follows:

Programming is not the only thing that happens on Earth while COSIMA is busy collecting dust. The COSIMA team have prepared and worked with 304 reference model test targets for secondary ion yield calibrations as well as instrument parameter fine tuning, and the vacuum pumps of the COSIMA reference model has operated for 102,720 hours.

Like many of Rosetta’s instruments, COSIMA was on the drawing board from an early stage. Martin recalls: “One team member was already involved with Rosetta and COSIMA in 1984, in the very first meeting of the science study team of what was then the “Comet Nucleus Sample Return” cornerstone mission of the newly defined Horizon 2000 program of ESA. In the early 1990s, the mission evolved into a comet rendezvous mission dedicated to the characterisation of cometary material. One of the key arguments at that time was that if we could not bring cometary samples back to the laboratory on Earth, then we should take key laboratory instruments to the comet. COSIMA, along with many other instruments, was already part of the discussion then, and we’re very happy with how it’s all worked out!”

On summing up the highlights of COSIMA’s discoveries, Martin concludes: the tiny bits and pieces of dust particles collected in the coma of Comet 67P/C-G revealed their heterogeneous composition, their fragility and their close family relation to interplanetary dust particles.