Living with a comet: a MIDAS team perspective

This is the first of a series of blog posts that delve behind the scenes of Rosetta’s instrument teams to find out what it was really like “living with a comet” for two years, with some impressive statistics collected along the way.

Tasked with collecting and scanning – in 3D – the comet’s smallest dust grains, Rosetta’s Micro-Imaging Dust Analysis System (MIDAS) also has one of the smallest teams: “1.2 people in the beginning”, says principal investigator Mark Bentley. But as ever with Rosetta, the numbers are big: after two years of science, Mark and his PhD student Thurid Mannel report on the highs and lows of the 52 million up-down motions of the MIDAS scanning tip. 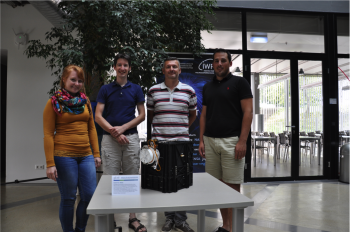 Mark reflects on the post-hibernation period, the overall performance of the instrument, and lessons learned for a future MIDAS:

The early days of the mission, when we were first starting operations after hibernation exit in January 2014 were pretty crazy – mainly because we were a rather small team, approximately 1.2 people comprised of me and 20% of Harald’s time (Harald is MIDAS technical manager). As such I was trying to juggle many hats, from high-level science planning, to very low-level telecommand hacking – and being a father to a 3-month-old! The learning curve was also pretty steep. Although I’d been using the Flight Spare for several years, figuring out how the planning system worked and playing with real data was a challenge – but lots of fun. The only worrying moment came during one of the interactive checkouts, when Harald and myself were at ESOC watching the data come down “live”, when I realised that a parameter that controlled one of the motors was set wrong. Knowing that there was, at this point, nothing that could be done, I simply had to wait and watch the telemetry come down, hoping I hadn’t broken MIDAS before we had even got to the comet… Fortunately the engineers did their jobs very well, and everything was fine.

Overall the instrument has performed extremely well, but there are always things that could be improved for the next version. One key problem is that we could only expose a target to space to collect dust OR scan a target with the microscope – not both together. Ultimately the comet was and is an unpredictable beast, and so apart from applying high level factors (e.g. closer=better) it was something of a guessing game deciding when to expose and when to scan. So I was extremely happy in February 2016 – already into the extended mission – when we happened to be exposing a target during a gas and dust outburst. Not only did this give us a target covered in dust, but many other instruments were observing at the same time, so we have started to weave a coherent story about this event and the dust we have been imaging. In fact we got so much dust on this target, that we basically stopped exposing and decided to focus our attention on this one target.

And we’re still trying to image as much as possible – and will be doing to until about 12 hours before the orbiter “lands” on the surface of Comet 67P on 30 September.

MIDAS works by collecting and then physically scanning grains with an Atomic Force Microscope. This uses a very fine tip, a bit like an old-fashioned record player needle, that is scanned over a particle. The deflection of the needle and therefore the height of the sample are measured to build up a 3D picture. This enables scientists to determine the structure of the particle, and thus gain insight into how it might have formed.

MIDAS PhD student Thurid Mannel joined the team as an intern in May 2014, and started her PhD in June 2016. Here she shares the frustrations that went alongside the most joyous moments of scientific discovery:

I think the most surprising observation was after nearly three months at the comet and not detecting anything, we then recorded an image so distorted that we barely realised it was a large dust particle that we were looking at! 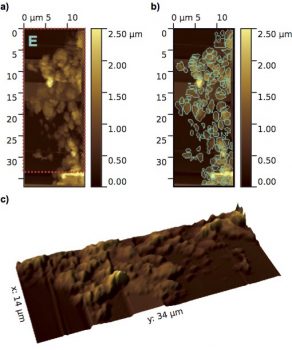 Atomic force microscope topographic images of MIDAS particle E, a loosely packed ‘fluffy’ aggregate comprising many grains. (a) Overview image with a pixel resolution of 210 nm and a colour scale representing height. b) Sub-units (grains) of the particle detected at the resolution of the instrument are outlined. (c) 3D image of the particle corresponding to the area covered by the red outline in (a) with two times height exaggeration to aid visualisation.

We had been exposing a facet from mid-September 2014 and looked for dust on it every now and then, but did not find anything… until 14 November. This was a great relief for us, since the other dust analysing instruments COSIMA and GIADA already sampled many dust particles. We celebrated our first dust and shared the image with you on this blog. Of course we wanted to discover more of this particle – but any attempt to re-scan it failed. Scans on different locations on this target either gave too distorted results for scientific use or were completely failing, the only bright spots were very few rather distorted, barely recognisable dust particles. It was quite an emotional roller coaster for us! Since scanning on this target resulted in more failed than successful scans we decided, with heavy-hearts, to give up on this particular target.

In December we exposed a fresh target and hoped for better images of cometary dust. The new target, however, showed no dust at all until end of December – and in January we were finally able to record my most favourite scan: it is shown in Mark’s recent Nature paper as particle E (see image left) and it really stands out in our whole particle collection. We knew this already in the moment we received the image – another absolute highlight for me.

Shortly after we were able to record our three smallest dust particles so far, one of them also presented in Mark’s paper as particle D. However, except for one other particle, additional scans on this facet showed no dust at all, just the empty facet.

After the safe mode in 2015 we had to stay so far from the comet that MIDAS did not detect any dust particles – a rather depressing time for us. It was the end of July when we decided to use the time to go back to the target with the first particle on, the one that we abandoned earlier. We started doing very coarse and very cautious overview-scans at locations distant from the ones we had all those problems at the beginning of the mission, and discovered that the whole target must be covered with large, fragile dust particles! This was the most surprising observation for me! We had all the dust collected in the beginning of the mission without knowing it! Their height, their enormous size, and their fragility were probably causing all the distortions at the beginning of the mission. Even now, when we know about the wealth of particles we collected on this facet, their sizes and fragility makes it hard for us to image them. With a lot of patiently tweaking the scanning parameters in the end we succeeded to image at least some of the enormous particles. No other target gave us such a hard time and no other target holds so many, and such large dust particles [note that large for MIDAS is a few tens of micrometers].

This story illustrates well that MIDAS is not an instrument with high statistics but rather with high precision. Every dust particle is a precious resource due to our limited dust collection slots. And thus, my second most surprising event was when we were collecting dust particles exactly during the outburst event in February 2016. What a lucky coincidence for MIDAS! The wealth of particles we collected could keep us going for years, if it weren’t for our consumables slowly running out – we’ve now used all 16 of our scanning tips.

Although in the beginning MIDAS did not have the best start, in the end we can look back at sampling dust from very different phases of cometary evolution, including different dust populations, sizes and morphologies. There is a lot of material still to be analysed to understand the dust of Comet 67P at the micrometre to nanometre size, which will be important to our understanding of how comets are built.