MIDAS and its first dust grain

This blog post is contributed by Mark Bentley, MIDAS Principal Investigator at the Space Research Institute (IWF) in Graz, Austria.

One of the big challenges in planning MIDAS operations is predicting the amount of dust that we collect during an exposure. Measuring the rate of dust grains flying past Rosetta and their size distribution is, of course, part of our science, but to plan our operations, we need to have some idea of what to expect beforehand! This is particularly complicated because with MIDAS, we are interested in measuring the smallest cometary dust particles, less than 1 µm (micrometre or millionth of a metre) in size, and ground-based telescope observations that are used to study dust remotely are almost blind to these sizes.

So with that in mind, we started our first exposure in mid-September, opening the shutter for about 4 days. MIDAS works by collecting dust grains on sticky targets that are then scanned at very high resolution using an atomic force microscope.

Initial calculations suggested that we might find one particle of around 1 µm in an 80×80 µm scan. The “before” and “after” images are shown in the panel below – as you can see, nothing jumps out, as most of the features seen in the after image were also there before we opened the shutter, meaning that they are background contamination (this is why we need to take a scan before!). If you look closely, you might even convince yourself that one or more particles have disappeared, but this is just a result of small offsets in the position of each pixel.

Images of the MIDAS target before (left) and after (right) exposure in September 2014. The image shows an 80×80 µm portion of the target (the full target measures 1.4 x 2.4 mm). An indication of size is provided, and the colour scale provides a measure of the third spatial dimension (height). Image courtesy of Mark Bentley.

During the following weeks, the same target was exposed and scanned several more times to search for particles. Again, we didn’t see anything obvious. Then, as you may recall, something special happened in mid-November: the Philae lander was deployed to the surface of comet 67P/C-G. Instruments on-board the orbiter had to be in a state where they would be safe regardless of what happened during the lander delivery and, for MIDAS, this meant opening the shutter and exposing the target once more from 9–14 November.

Immediately afterwards, we began yet another scan of the centre of the exposed target. Unfortunately, this scan aborted after several lines – this can happen for several reasons, for example if a temperature change on-board causes the microscope to lose contact with the surface. As a result, it took us a week or so to look back at this small section of a scan. When we did, however, we had a surprise: 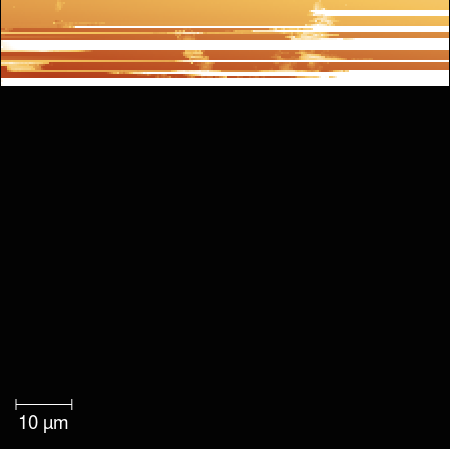 Scan of the MIDAS target exposed in November 2014. The image shows an 80×80 µm portion of the target (the full target measures 1.4 x 2.4 mm). Image courtesy of Mark Bentley.

Although it doesn’t look like much, this is in fact our first cometary dust particle!

A few things to note. The bottom black part of the image is not real data – this was after the scan aborted. Similarly, the white horizontal stripes in the upper part of the image, mostly towards the right side, are not real. MIDAS works by rastering over the sample – in this case from left to right in lines, starting from the top. If the sharp tip of the atomic force microscope moves to the next position and immediately thinks that it has detects the surface … oops, we’ve hit a dust particle!

In this case, MIDAS plays it safe and moves the tip up and away from the particle. However, there’s a limit to this movement and if it can’t move up far enough to get above the particle, the current line is aborted and the tip is moved down to the start of the next one – this is what produced the white horizontal stripes. If the topography is too high even at the start of the new line making it impossible for MIDAS to retract any further, the whole scan aborts.

Both of these things happened here, because the particle was much larger than expected!

If we zoom in on the “feature” in the first few lines, we can begin to get some idea about what was collected: the complex pattern visible in the upper right part of the image is, in fact, our first dust particle.

Above and below, two zooms of the MIDAS target exposed in November 2014. An indication of size is provided, and the colour scale provides a measure of the third spatial dimension (height). Images courtesy of Mark Bentley.

The first thing we see is that the particle is roughly 10 µm in size in the plane of the target, and slightly less in height. Interestingly, we expected to find many smaller particles before catching such a large one.

The next thing to note is that this dust particle appears to be complex in shape and not compact, suggestive of a “fluffy” aggregated grain.

To measure the full size of the grain and to answer more detailed questions, we will need to re-image it – knowing now that it is so large, we can optimise the scanning parameters to avoid hitting the particle from the sides and instead just tap it gently, something that MIDAS is designed to do.

This may not look like much, but it already tells us a lot about the dust environment of comet 67P/C-G and allows us to optimise our collection and scanning strategies. And don’t forget, it’s MIDAS’s first confirmed cometary dust particle – 20 years after the instrument was proposed, and after 10 years in flight! Watch this space for more details in the coming weeks.