As the contest to name the landing site on comet 67P/C-G draws to a close, we took another trip into the mission’s past, this time chasing the origin of Philae’s name. While the name of Rosetta was conceived within the team that defined the mission’s science objectives back in the late 1980s, the name of its lander, Philae, has a different origin. 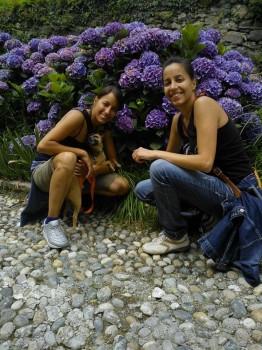 Serena (on the right) and her sister Lia (On the left). Image courtesy S. Vismara.

In fact, the name Philae is the result of another contest that was held one decade ago, shortly before the launch of Rosetta in 2004. The competition, which was open to young people aged 12 to 25 in the countries contributing to the development of the lander, was won by an Italian student, Serena Olga Vismara from Arluno, near Milan.

“I learnt about Rosetta and the contest to find the name for the lander thanks to a newsletter I received from ESA. In fact, as soon as we had an internet connection at home, that same year, I visited the ESA website and subscribed to the newsletter to stay up to date on ESA’s activities,” she said.

Ten years ago, Serena was a fifteen-year-old high-school student with a keen interest in all things space. Now, this interest has crystallised, as she is about to complete her Master’s degree in space engineering at the Politecnico di Milano.

For Rosetta’s lander, she suggested to adopt a name, Philae, that follows the same Egyptian theme that inspired the mission’s name. Philae is an island on the river Nile, in the south of Egypt, where archaeologists found an obelisk that was key to deciphering the hieroglyphs on the Rosetta stone.

“I decided to take part in the contest just for fun actually, I did not expect to have much chance of winning since the contest was open to so many young people and to other countries also,” Serena said.

But her idea was very powerful. The bilingual inscription found on the Philae obelisk – in Egyptian hieroglyphs and in ancient Greek – provided nineteenth century scholars with additional evidence to interpret the text written on the Rosetta Stone. Eventually, they could decode the ancient language of Egypt and unravel many mysteries about this thousand-year-long civilisation. This story captures very well the theme of the Rosetta mission, and particularly the synergy between lander and orbiter in studying comet 67P/C-G and unlocking its secrets.

So Philae was selected as the lander name and, as a prize, Serena was invited to Kourou, in French Guyana, to see the launch of Rosetta, which was planned for 26 February 2004. However, due to technical issues with the launcher, the launch was delayed to 2 March, which sadly meant that she could not witness the event.

“I had the opportunity to visit the preparation facilities and the Jupiter control centre and I remember everything quite well, but unfortunately I remember well also the disappointment when the launch had to be postponed and I could not see it because I had to come back to Italy,” Serena said.

During the past ten years, she has been following Rosetta’s progress and is now looking forward to the landing, which at the time she thought was the most exciting aspect of the mission.

“And I still think it is,” she added, “because it is like discovering another world.”

After a long journey, Rosetta has now arrived at its destination and is about to deploy Philae on the comet’s surface on 12 November.

“I will follow the landing for sure and with fingers crossed hoping that everything will go as planned,” said Serena. “And then I will wait for the results of the mission to improve my knowledge about comets!”

Watch a video interview to Serena Olga Vismara that was produced by DLR earlier this year: