Yesterday we launched a competition inviting members of the public to propose a name for Philae’s landing site. While many of you might be busy thinking of a good name to replace “Site J”, we thought to provide you with some inspiration by revisiting the story of Rosetta’s name.

If you are a regular follower of this blog you are no doubt familiar with the reasons why ESA’s comet-chasing mission was named after the Rosetta Stone – a dark stele unearthed in 1799 near the town of Rashid (in English, Rosetta) on the Nile Delta, in Egypt. Carrying the text of the same decree in three different scripts, the Rosetta Stone helped nineteenth century scholars decipher the sacred written system of hieroglyphs, offering a new key into the study of the ancient Egyptian civilisation. But maybe not all of you know the story of when and how the name Rosetta was chosen for the mission. Continue reading and all will be revealed in this interview with Professor Eberhard Grün, an Interdisciplinary Scientist for the Rosetta mission from the Max Planck Institute for Nuclear Physics in Heidelberg, Germany. A renowned expert on comets and interstellar dust who has been involved with the mission since its early days, Professor Grün has been often called the ‘Father of Rosetta’, since it was he who suggested this evocative name back in 1987.

Was the mission called Rosetta from the very start or did it have a different name at first?

“At the beginning it was simply called ‘Comet Nucleus Sample Return’. As the name implies, the mission concept was quite different back then.”

When was the mission first proposed?

“In 1985, ESA was putting together its long-term science programme, ‘Horizon 2000’. There was still one year to go before Giotto would fly by comet Halley, but the community was already looking ahead and the Solar System Working Group recommended a comet nucleus sample return mission as a cornerstone of the programme. A joint ESA/NASA Science Definition Team was created to identify the scientific goals for such a mission, and I was the European chairman of that team.”

What were the science objectives at the time?

“The core science goals haven’t changed much: to rendezvous with an active and relatively fresh comet, studying its nucleus and what it’s made of to trace back the raw material from which the solar system formed. At the time, there was a large community who analysed meteorites in the lab to understand their chemical composition. Meteorites are debris from (mainly) asteroids that make it to the surface of Earth, and their study helped us piece together the chemical composition of the solar system today. But if we want to study the primordial solar system, comets are the objects to explore. While asteroids formed between Mars and Jupiter, comets formed much farther away from the Sun, so comet material has been much less processed and is much closer to the pristine composition of the solar system.” 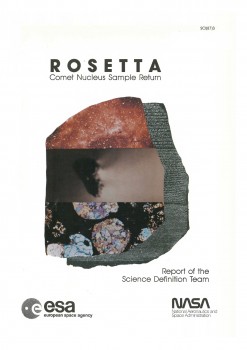 Cover from the Science Definition Team report about Rosetta, December 1987. As shown in this artistic view, which resembles the shape of the Rosetta Stone, comets (at the centre, an image of comet Halley) represent the link between the study of meteorites (below, a thin section of the Allende meteorite) and interstellar clouds of gas and dust (above, an image of the Rosette nebula) such as the one from which the solar system formed.

So comets take us one step further back in time?

“In a way, comets hold the key to link meteorites, which we can access and study on Earth, to our ultimate goal – understanding the composition of the interstellar cloud where our star and planets were born. With a space mission to visit a comet and collect samples from its nucleus, we could gather brand new information to decipher the history of our solar system. And it was then that it occurred to me: this is the same story as the Rosetta Stone!”

What do you mean exactly?

“Until the nineteenth century, scholars of Ancient Egypt were in a very similar situation. They had many clues to study the history, culture and art, but couldn’t grasp this thousand-year-long civilisation in its full entirety until they deciphered its language. The discovery of the Rosetta Stone changed the course of this discipline. It was the first document in which the same text appears in two languages – ancient Greek and ancient Egyptian, the latter in two different forms: the more common Demotic script and the mysterious hieroglyphs.”

“The Rosetta Stone provided scholars the link between a language they could read and understand – ancient Greek – and the unknown language of ancient Egypt. The connection was made easier by the presence of the same text in two different Egyptian scripts that are both based on phonetic as well as ideographic symbols.”

So when did you suggest the name Rosetta?

“When this idea first crossed my mind, towards the end of 1986, I went to the library at the University of Heidelberg to learn more about the Rosetta Stone and how it revolutionised the study of Ancient Egypt. There was clearly a parallel with comets and their role to interpret the history of the solar system, and besides, the name ‘Rosetta’ was much more powerful than what we had before. I phoned Gerhard Schwehm, who was the mission study scientist at ESA, and he liked the idea. The entire Science Definition Team thought it was a great name and also Roger Bonnet, ESA’s Science Director at the time, so it stuck pretty quickly. ”

“By the end of 1987, we referred to the mission as ‘Rosetta – Comet Nucleus Sample Return’ in the first study report from the Science Definition Team. The front page of the report also featured a photo of the original Rosetta Stone, with its three different scripts, along with an artistic rendition of a planetary science analogue of the ancient stone tablet, with the three different steps of our inquiry: meteorites, comets and interstellar clouds.”

That’s the beginning of the story. What happened to Rosetta next?

“The original plan was to collect a sample of material from the comet’s nucleus and send it back to Earth to analyse it in a lab, and we all had a different idea of how to achieve this. But in the early 1990s NASA withdrew from the project because of financial difficulties, and the mission was redefined so that ESA could perform this alone. Rather than bringing the material back home, Rosetta is now taking the lab to the comet. The focus remained on the analysis of the material in the nucleus (although the comparison with meteorites is no longer explicitly among the goals) and the processes that control the nucleus and its environment.”

“But the name still fits the mission perfectly: every new day with Rosetta at the comet, we are gathering more clues on how a comet works and how to decipher the solar system hieroglyphs and piece together our cosmic origins.”