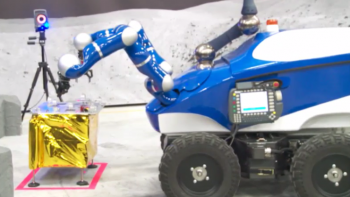 Flight day 6 was probably one of ESA astronaut Andreas Mogensen’s most busy on the International Space Station so far, but many experiments have been completed. After the daily planning conference with ground control Andreas put on the SkinSuit and finished testing the MobileHR wireless bike exercise system by going for a 90-minute session on the Station’s exercise bike. 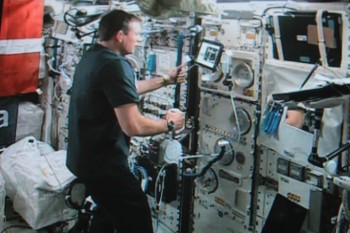 He used a new 3D training tool called 3Dvit to setup the highlight of the day in ESA’s Columbus space laboratory: operating the Centaur robot in The Netherlands to put a peg in a hole simulating connecting a wire on another planet. The Interact experiment was setup to be a tough challenge: thousands of kilometres away orbiting Earth 400 km high at speeds of 28 800 km/h Andreas had to remotely operate Centaur’s arms in an operation that allowed only 150 micrometre tolerance – or less than a sixth of a milimetre. This precision required tactile feedback that ESA developed to allow fine robotic control over large distances. Andreas “felt” the objects he was “touching” but the signals travelled up some 144000 km.

Despite these overwhelming odds Andreas expertly moved the robot to the peg board and put the peg in the hole. His first try took 45 minutes, but on a second run it only took 10 minutes. A second part of the experiment saw Andreas “touch” objects from afar and compare their feeling.

In between the Interact experiment Andreas took a break from driving a rover in the Netherlands to make two live calls with media in Denmark including to his wife Cecilie.

During one of the media events with DR Andreas was asked “How does it feel to see 16 sunrises and sunsets a day? ” He replied “I don’t really feel this as I’m mostly working in Columbus that does not have windows.” He does think his body is in a major jetlag and has no idea what time it is. He just does his job, working through the day, eating and sleeping.

Talking with Cecilie and Danish media.

Cecilie Beyer, who has been married to Andreas Mogensen for three years and was invited to the TV studio was allowed to ask one question to the Danish astronaut on board the International Space Station. Cecilie wanted to know if this whole experience in space will affect Andreas Mogensen as a human being when he comes back to Earth.

Andreas replied: “My view may change a bit, but I think I’ll leave the International Space Station with a lot of amazing experiences that I will always remember.”

After the event Andreas had lunch with the eight other astronauts on the International Space Station and took his SkinSuit off for the last time. Before storing the SkinSuit he took some microbiological samples from it after wearing the suit for two days. In the evening Andreas filled in his daily Space Headaches questionnaire and a questionnaire for 3DVit.

In all Andreas completed the MobileHR, SkinSuit, 3DVit and Interact experiments and mission control has crossed them off the list.