MobileHR – my heart beats faster for you 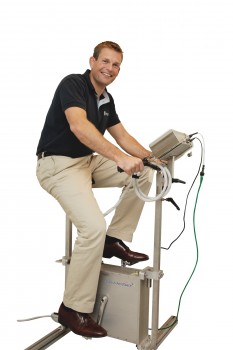 A simple but important experiment for ESA astronaut Andreas Mogensen’s mission will get his heart beating faster – by design.

The Space Station has a handful of exercise machines for astronauts to keep fit but also to research how their bodies cope with living in space. Collecting heart-rate and exercise data can be essential for flight surgeons on ground tasked with keeping astronauts healthy and fit, but also for experiments collecting data on blood flow, energy expenditure and so on.

The measurements on NASA’s Space Station training bicycle (CEVIS – Cycle Ergometer with Vibration Isolation System) uses wires and electromagnetic transmitters to send heart-rate data to the cycle’s control panel nearby – but the system often does not work as intended and wires are cumbersome and time-consuming to plug in.

Danish Aerospace Corporation is investigating whether they can provide a better and more reliable solution to the tangle of wires and the current system. The result is a heart-rate monitor and new ergonometer pedal cranks that transmits its information via Bluetooth. This is common technology for athletes and amateur cyclists but will it work in space without interfering with the International Space Station’s other equipment or being disturbed itself by the Space Station’s powerfull antennas?

In the current planning (for a 10-day mission such as iriss the schedule can change often and at any moment) Andreas will change the pedals on the Station’s bicycle ergometer and put on his cycling shoes to start pedalling and test the new equipment. The control panel and a laptop nearby will receive the Bluetooth signals via a dongle and specially-developed software that is adapted to the International Space Station. The next morning another session is planned after which Andreas will put back the old pedals for his astronaut colleague’s next training session. The pedals could potentially stays on board for future use.

Aside from the exercise routine itself this experiment is set to only take up 20 minutes of Andreas’s time, spent changing the pedals. The full equipment list consists of bicycle shoes, force pedals, the heart-rate monitor, the Bluetooth dongle and a hard drive with the new software and to store the results.

Every experiment needs a name and this project has been dubbed MobileHR for Mobile Heart Rate.