The ROSINA instrument on Rosetta has been “sniffing” the environment of Comet 67P/Churyumov-Gerasimenko for the past couple of years, obtaining unprecedented measurements of the gases found in a comet’s atmosphere. Besides the main component – water vapour – ROSINA detected a wide variety of chemical species, from simple atoms to increasingly complex molecules, including some ingredients that were crucial for the origin of life on Earth.

In a humorous take on this “cometary zoo”, Kathrin Altwegg, ROSINA principal investigator from University of Bern and an enthusiast of animals, tells us more about the variety of bizarre “creatures” they’ve found at the comet.

The strange “creatures” found by ROSINA in the gas around Comet 67P/C-G. Credit: ESA

Let’s start from the volatile species, our beautiful butterflies, including CO, CO2, nitrogen, and the unexpected oxygen.

Then, we found many carbon chains, from methane and ethane to long chains – propane, butane, pentane… up to heptane. These are our giraffes. In fact, we might have found even longer chains, but we are still working to find out the corresponding molecule.

We also found many elephants, with a round shape and large mass: the aromatic ring compounds, from benzene to naphthalene – which also suggests there are no moths at Comet 67P/C-G!

There are many alcoholic compounds in the comet’s atmosphere – not all of them have the potential to make you look funny, but we still like to group them in the “monkey” zone.

Glycine, the amino acid found in proteins and crucial for life as we know it on Earth, is of course the king of the zoo – the lion – who feeds on zebras… In fact, the “smelly manure” zebra-molecules, ammonia, methylamine and ethylamine, are precursors to glycine.

We also found other unpleasantly smelly molecules at the comet: the sulphur-bearing skunks (hydrogensulphide, carbonylsulphide, sulphur monoxide and dioxide, and carbon disulphide) and the dart frogs (including some coloured species of sulphur: the blue S2, the yellow S3, and the red S4).

Some species we found at the comet are not only unpleasant to smell, but could be poisonous to some extent: the snakes – including acetylene, hydrogen cyanide and formaldehyde.

We found some noble gases at the comet: argon, xenon and krypton, which are beautiful and solitary – they don’t react easily with other molecules – like the aloof peacock.

There are also hard, non-volatile species sputtered by the solar wind, like sodium, potassium, silicon, and magnesium. These are the oysters, as the findings contain some rare “pearls”, for example, isotopic ratios for silicon that were never measured before.

We also found hydrogen chloride – which can produce sea salt when in contact with sodium – and grouped it with other species as seawater, tropical fish. In this group we included also phosphorus, a key component of DNA and cell membranes.

There are also some complex, hard to classify oxygen- and nitrogen-bearing molecules, which are more complex than others found at the comet: they have no long chains, no rings, but they branch, so they became our exotic birds.

Finally, we also found cyanogen (C2N2), which was always there in our measurements but somehow hiding, and it took us two years to detect: a true chameleon!

And the search is not over… we see hints of more “beasts” on the horizon, but we have not fully identified them yet. 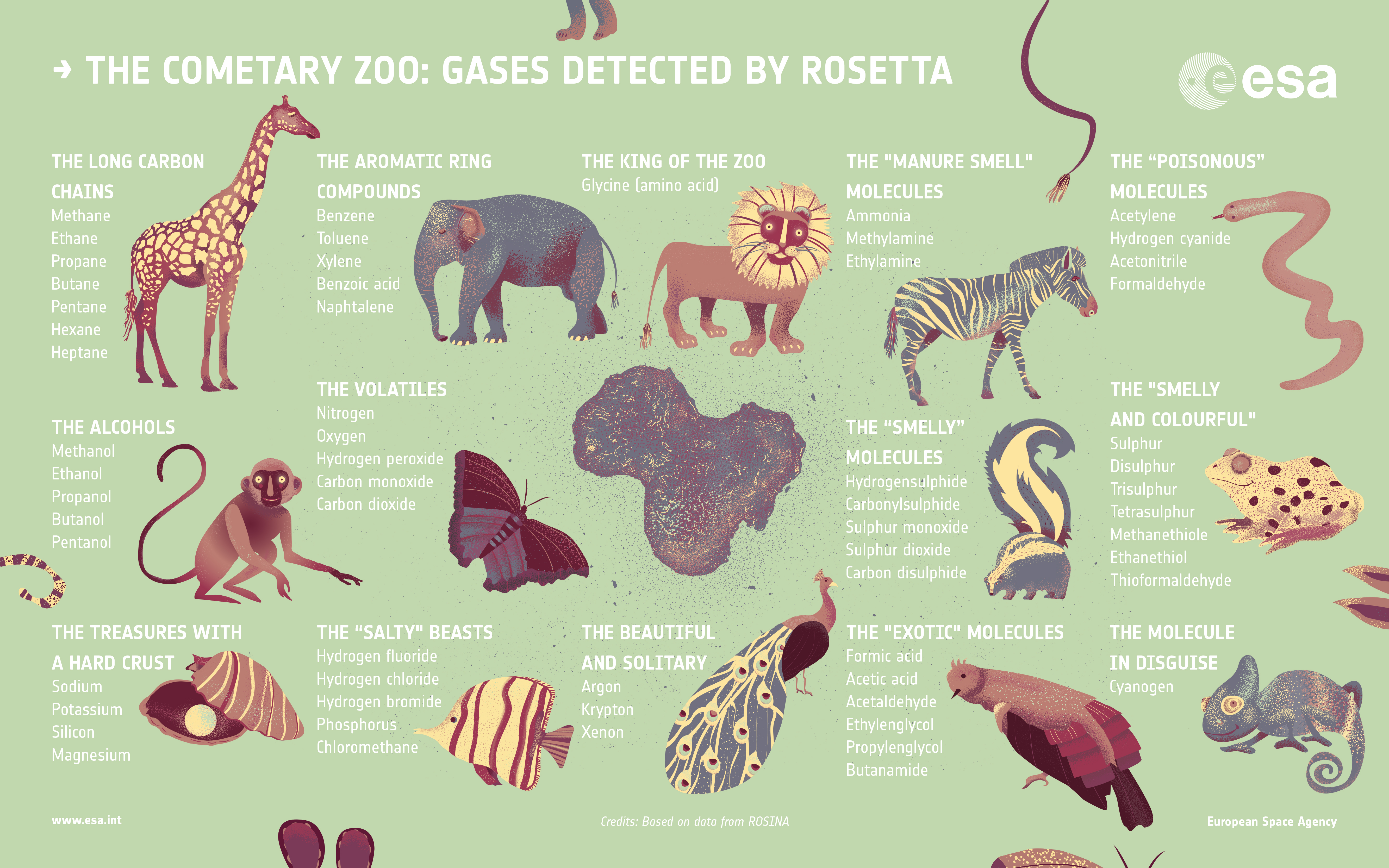 Even if they are only inanimate chemical species – comets do not contain life, that’s for sure! – looking at this colourful and diverse zoo we cannot but wonder what would happen if a piece of the comet were to fall in an ocean of water – after all, the ingredients for life are there.

–
The results from ROSINA were presented by Kathrin Altwegg during today’s science briefing at the European Space Operations Centre (ESOC) in Darmstadt, Germany.