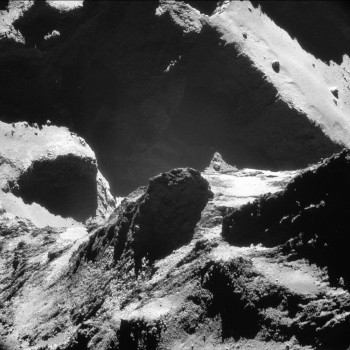 This image was captured on 19 October 2014 and looks across the neck from the comet’s small lobe in the foreground to the large lobe in the background. Parts of the Anuket and Serqet regions are visible in the foreground and a portion of Hapi is present at centre-left, with the dramatic cliff edge in Seth in the background. There are significant variations in the distances between Rosetta and different parts of the comet in the foreground and background, but the average scale in the image is approximately 77 cm/pixel, yielding a frame width of 785m. The image has been contrast enhanced. Credits: ESA/Rosetta/NAVCAM – CC BY-SA IGO 3.0.

Today perhaps the most anticipated set of NAVCAM images of Comet 67P/Churyumov-Gerasimenko have been released by the Rosetta Downlink & Archive Team via the Archive Image Browser and ESA’s Planetary Sciences Archive.

The 1776 images cover the period between 23 September and 21 November 2014, corresponding to Rosetta’s close study of the comet down to distances of just 10 km from the comet centre – 8 km from the surface – and the images taken during and immediately following the landing of Philae on the comet.

An animation illustrating Rosetta’s trajectory around this period can be found here, providing context for the range of distances covered by the images in this release. Because of the spacecraft’s proximity to the comet during much of this period, the nucleus overfilled the NAVCAM field of view, and therefore the majority of images are in 2 x 2 rasters to cover the whole comet.

The single frames can certainly be admired individually (see the example above), but they can also be stitched together to create stunning mosaics, as we featured in many of our CometWatch releases from that period. We’re always impressed with the scenes that the image processing fans among you create, and we look forward to seeing what you generate from this release.

In addition to images from the close orbit phase, there are some great gems in this release, such as the NAVCAM’s view of lander Philae shortly after separating from Rosetta on 12 November (below). Although not as detailed as the images captured by Rosetta’s scientific camera OSIRIS, Philae’s body and its three legs can still be made out in a number of NAVCAM images as the lander falls towards the comet.

The NAVCAM also captured some wonderful views of Hatmehit, the large, 1 km-wide depression on the comet’s small lobe, around the time of the landing.

The first image in the sequence below includes the first touchdown point, Agilkia, at the bottom left of the frame. Philae subsequently took flight across the surface of the comet and came to rest elsewhere – a site now known as Abydos – nearly two hours later.

The Hatmehit region on the small lobe of Comet 67P/Churyumov-Gerasimenko as seen by NAVCAM around the time of Philae’s first touchdown, flight over the comet, and final landing at 15:35, 16:35 and 17:35 UT (on-board spacecraft time) on 12 November 2014. The distance between the spacecraft and comet centre over this period was between 17.4 and 17.8 km; apparent changes in the image scale are due to projection effects as the comet rotated underneath the spacecraft. The first landing site can be found in the first image, in the bottom left corner of the frame. The image has been contrast enhanced but vignetting has not been removed. Credits: ESA/Rosetta/NavCam – CC BY-SA IGO 3.0

The next NAVCAM archive release is planned for end June and will cover the period 21 November to 19 December 2014.