Rosetta’s Grain Impact Analyser and Dust Accumulator, GIADA, has detected its first dust grains. This is the first time in cometary space exploration that dust has been collected so close to the nucleus and at such large distances from the Sun.

GIADA is one of three instruments on-board Rosetta, along with COSIMA and MIDAS, designed to provide information about dust associated with comet 67P/Churyumov-Gerasimenko (follow the links to read earlier blog posts about the roles of COSIMA and MIDAS). GIADA’s role is to measure the number, mass, momentum, and velocity distribution of dust grains in the near-comet environment, as well as supporting the characterisation of any dust emitting areas on the surface of the comet.

Comet dust grains are thought be a combination of silicates, organics and some minor constituents. These grains are encased in the various ices of the nucleus and released as the ice sublimates (changes to a gas) when warmed by the Sun. Dust grains form part of the coma around the comet and, later the dust tail. 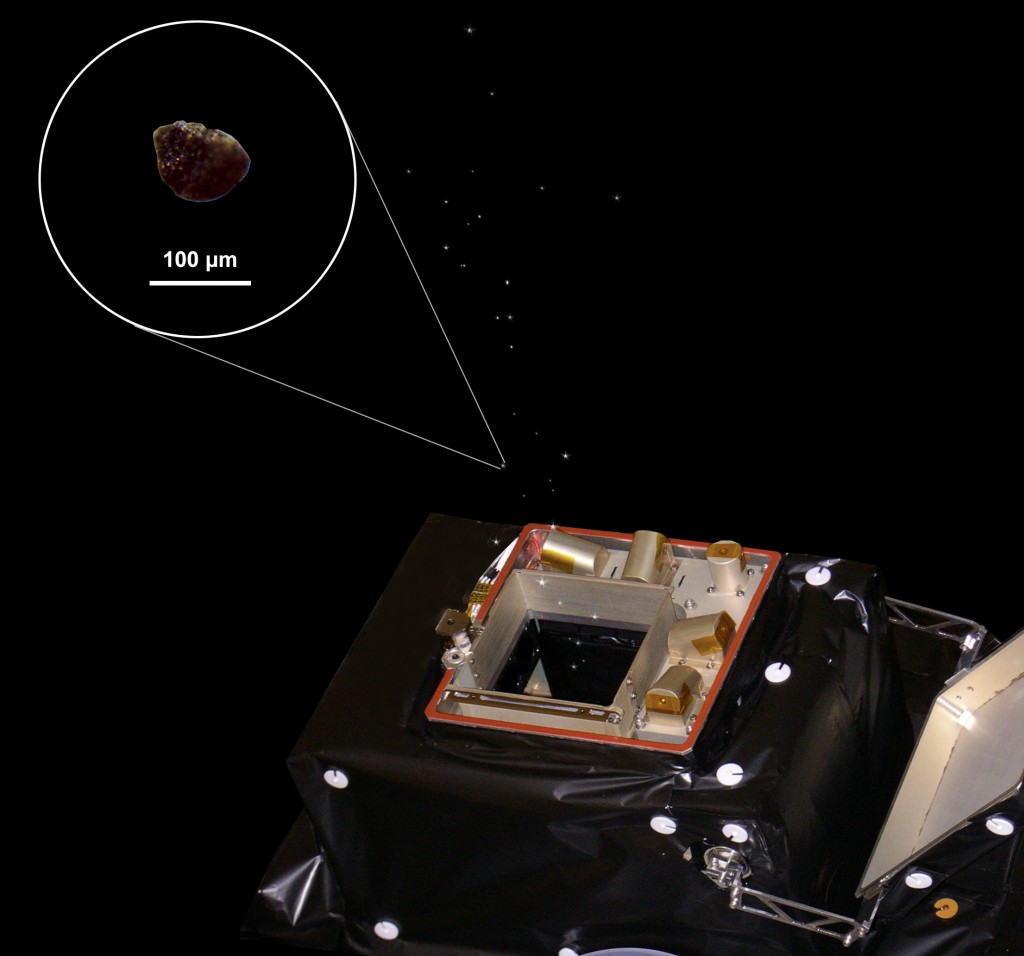 Representation of GIADA collecting comet dust. The inset shows an image taken with a stereo microscope of an analogue dust grain used in the laboratory for GIADA calibration activities. The image was prepared with GIADA consortium material by M. Ferrari and V. Galluzzi. Credit: ESA/Rosetta/GIADA/Univ Parthenope NA/INAF-OAC/IAA/INAF-IAPS

Earlier this month, GIADA detected the first four dust grains in its Impact Sensor. The first detection was made on 1 August, when Rosetta was 814 km from 67P/C-G, and about 543 million kilometres from the Sun. Further impacts from three more dust grains were detected on 2, 4, and 5 August, at distances of 603, 286, and 179 km from the comet, respectively.

Many more grains need to be registered before the coma dust environment can be characterised in any great detail, but a few preliminary calculations can be made based on just these four.

The first impact had a measured momentum of 9.8 x 10–10 (± 1 x 10–10) kg m/s, just above the detection limit of GIADA’s Impact Sensor. In addition, the detection was helped by the relative motion of the spacecraft towards 67P/C-G, which was at about 3.5 m/s at the time, which increased the velocity of the grain relative to the spacecraft. Following rendezvous, the relative velocity is less than 1 m/s, and both comet and Rosetta are orbiting the Sun at about 15 km/s.

From the measured momentum of the impacts, it was possible to estimate the sizes of the collected grains, which range from a few tens of microns (comparable to the width of a human hair) up to a few hundreds of microns across (about 0.35 millimetres).

Furthermore, based on this very preliminary analysis, the dust environment of the comet in its current location from the Sun seems to have a density equal to or perhaps even higher of that predicted by the model developed by the GIADA instrument team to simulate the performance of the dust-collecting instruments on board Rosetta at these distances.

Dust activity will increase as Rosetta and GIADA move closer to the comet, and as activity builds up as the comet moves closer to the Sun. Over the course of the mission, GIADA will provide a complete overview of the dust environment of the comet and how it evolves over time.

GIADA will also provide inputs to other instruments on-board Rosetta, and will help improve coma dust models in support of the Philae landing operations. Furthermore, GIADA will play an important role for the health and the safety of Rosetta and its instruments, providing information about the deposition rates of dust on optical components and critical parts of the spacecraft, such as the solar panels.

But for now, the team is just delighted to be finally detecting dust grains, “touching” the comet nucleus, albeit from quite some distance, and to have begun the investigation of the comet’s dust environment.